Heath continues to improve his midsection following hernia surgery in 2018 and has started incorporating cold plunges for recovery. 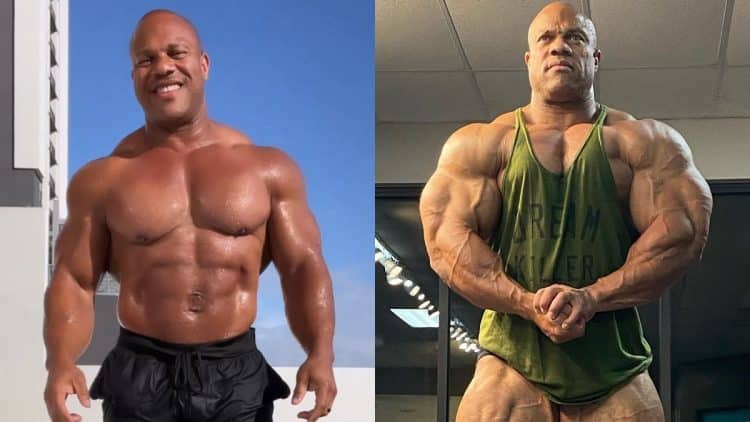 Phil Heath left the sport in 2020 as one of the most successful Men’s Open competitors in the IFBB Pro League with seven Mr. Olympia titles. Heath recently posted a physique update, showing off his improved midsection while plunging into an ice bath.

Heath established himself as a seven-time Mr. Olympia from 2011-2017, a distinction he shares with Arnold Schwarzenegger. During his time on stage, Heath dominated the competition with fullness and conditioning. Taking on names like Jay Cutler and arch-rival Kai Greene, Heath proved himself against some of the world’s best bodybuilders.

Heath underwent hernia surgery immediately after winning his last Mr. Olympia title in 2017. The following year, he was dethroned by the late Shawn Rhoden at 2018 Olympia. Heath attempted a comeback two years later but was unable to recapture his throne against Brandon Curry and Mamdouh ‘Big Ramy’ Elssbiay.

Since stepping away, Heath has provided updates on his midsection. Last year, the bodybuilding legend’s progress photo left fans impressed by his clearer abs, an area many believe held him back from winning an eighth Olympia title. In his latest update, Heath showed off his improved midsection five years post-hernia surgery.

“My new morning routine is getting into this 39 degree @coldplunge 💪🏽

I have been doing morning cold showers for 2 years now but it wasn’t enough. I can’t lie, I was a little nervous about getting into this thing LOL I knew all my aches and pains would expose themselves but DAMN it truly feels amazing! It’s important to focus on your breathing and know that the ache of the cold doesn’t last long. Once you’re 1-2 minutes in you start to feel incredible. I recommend that everyone get into cold water as soon as they rise!

EVERY DAMN DAY we must do things that challenge us. Those who run from fear also run from their destiny!

Heath on Goals and Creating Legacy: ‘No One Can Want Success More Than You’

In a separate interview at the 2023 LA Fit Expo, Heath gave his thoughts on setting goals and creating a legacy.

“Well, you got to set standards. You know you have to address the ones that you had in the past that got you where you’re at today, and what did it yield? Did it yield success or did it yield a lot of depression through failure. If you want more, you have to be willing to do more at the end of the day.”

“You have to have different measurements of success. You have to be more meticulous about how your day gets started and how it ends. Do a review every day. So, if you could have more structure and hold yourself more accountable — because this is your life. This is yours. No one can want success more than you.”

Heath believes self-improvement starts with facing fears and said ‘answering those calls’ helped create success for him as a bodybuilder.

“The way I’ve been able to help people is because I’ve been able to face my own fears. I do understand why I feared being successful, why this, why that — and answer those calls. That is the real work. In bodybuilding, the problem that we have is we may have gotten into this sport for the wrong intentions,” Phil Heath explained.

“So, that’s where it leaves a good legacy in my opinion, where you could lay your head down and say, ‘I gave it my all,’ if God takes me away, I really hope I left a mark,” says Heath. “If I say that I’m going to eat five meals tomorrow, is it the end of the world that I didn’t make it happen? No. But it might be if I was getting ready for a contest. Hold yourself accountable.”

Even though he’s teased it several times, Heath hasn’t committed to a firm comeback. Fans thought he might return at 2022 Olympia, but he ended up working at the event as a commentator. Phil spoke with Jay Cutler a few weeks ago, where he hinted at a possible comeback. Previously, he mentioned that he had something ‘fuc**ng crazy’ planned for the 2023 season.

Heath’s bodybuilding coach Hany Rambod wouldn’t completely dismiss Phil returning but said the road back to title contention would be difficult. If Heath makes his way to the 2023 Mr. Olympia contest in November, he will face two of his teammates, champion Hadi Choopan and Derek Lunsford.