Swoll took issue with the female TikToker, who shared in her video, 'natural selection better take these weirdos out.' 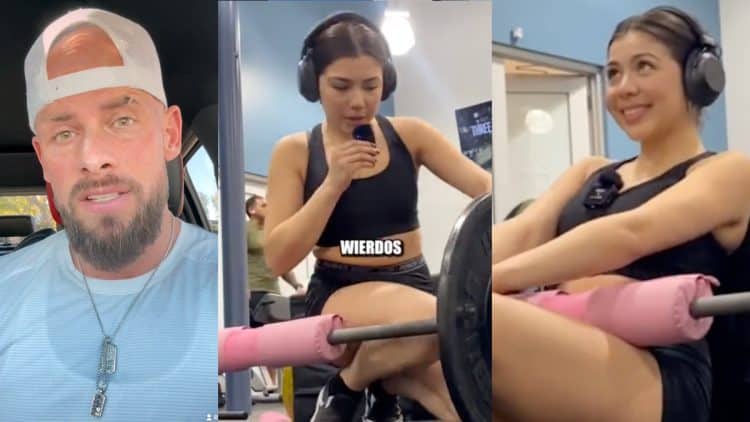 Fitness influencer Joey Swoll is continuing where he left off in 2022. After a female TikToker went viral for disrespecting a gym-goer who offered help, Swoll created a reaction video condemning her behavior.

“It’s sad to see you took an act of kindness, this man doing something for you, being kind, and turned him into a creep at the gym,” Joey Swoll said.

Over the past year, Joey Swoll has made it his mission to correct poor gym etiquette or what he refers to as ‘toxic gym culture.’ His goal is for gyms and fitness centers to be safe and welcoming places. One of the last time bodybuilding fans heard from Swoll he was defending NPC athlete Charly Joung for posing at his local gym. After the incident, Swoll was surprised Joung was cursed out by the angry gym-goer.

Whether it’s stealing weight plates, ego-lifting, or being rude, Swoll wants to speak up for those who won’t/can’t. His efforts have paid off already as others have used his message to make the gym a better environment. Some have apologized too, like TikToker ‘Nicki Fitness,’ who went viral for shaming a man practicing drag curls.

In his latest endeavor, Joey Swoll took issue with a female TikToker who accused a man of staring at her multiple times. The man also tried to help her attach weights to the barbell she was using.

In a video shared via TikTok, Swoll explained why user @Jessica49 was in the wrong after cursing out a man trying to help her attach weights to a barbell.

“There is a big difference between staring at somebody and simply looking or glancing at them. So, why did this man look at you? Well, you’re in front of him off to the side, you’re in his peripheral. You’re also taking a video with your camera pointed directly at him and you’re talking to yourself. He’s probably watching you wondering, ‘what is she doing,’ I know I would,” Joey Swoll explained.

Women are harassed in gyms and it needs to stop, but you are not one of them. An act of kindness or a glance does not make you a victim.

Update: Female TikToker Apologizes After Getting Called Out by Joey Swoll: ‘Thank You for the Wake-Up Call’

During the video, she layered the screen of the TikTok with, “what if I just ripped his pp (reproductive organ) out of his socket so he could never reproduce again” and “natural selection better take these wierdos out.”

“Talking about how you want to rip his reproductive organ off so he can’t reproduce and that natural selection should take him out. Really? Swoll remarked. “Trying to make yourself out to be a victim. Which you’re not. There are women harassed at gyms, you’re not one of them. You need to do better.”

Some fans were critical of her actions as well. In the TikTok video, she appeared to have a problem with the exploitation of her body. And while the circumstances are different, a few onlookers called attention to the fact that she runs a profile on the adult site OnlyFans. On Twitter yesterday, she issued a brief apology.

The video sparked a lot of reactions on social media, with many questioning whether Jessica’s distress was genuine. Some users pointed out that she had no problem sharing her workouts with hundreds of thousands of followers on TikTok, yet was upset when someone looked her way. The criticism was so intense that she turned off comments on her post. Many Twitter users argued that the problem was with Jessica’s actions and not the man behind her, who some suggested was trying to assist her with the weights.

I watched the whole video. The guy glances over a few times, probably wondering why she’s recording herself. Then he comes over and offers to help her rack the weights. She declines, he says “oh ok,” and walks away. The end. She’s the problem here, not him. https://t.co/iAjSiTlMuv

Women are harassed in gyms and it needs to stop, but you are not one of them. An act of kindness or a glance does not make you a victim. pic.twitter.com/34g9265KXb

With the new year kicking off, gyms are as busy as ever. After condemning Jessica’s behavior on TikTok, Swoll plans to continue fighting against toxic gym culture in the months to come.

Joey Swoll, who is known for calling attention to poor gym-etiquette, had to take a break from his usual routine....