The Olympia President discussed this week's 2022 extravaganza, 2023 Masters Olympia details, and one of the sport's best rivalries. 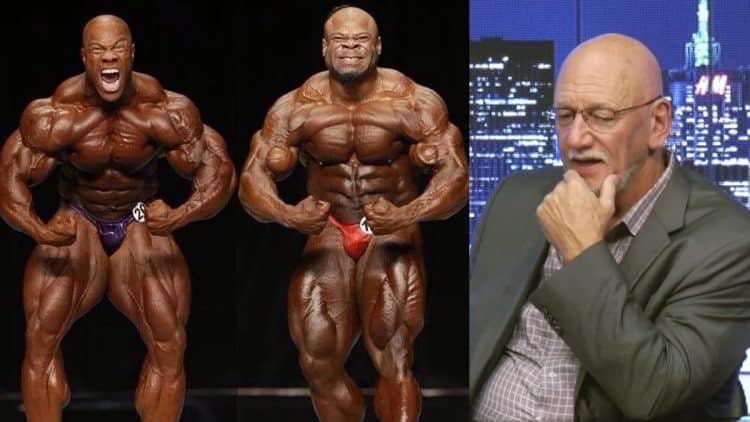 The 2022 Mr. Olympia contest will feature the sport’s best bodybuilders from a total of 11 divisions. Headlining the event is two-time champion Mamdouh ‘Big Ramy’ Elssbiay, who plans to fend off several Men’s Open contenders making a push for his title. Phil Heath, a former seven-time Olympia winner commentating on the event, stated that Ramy will lose to Hadi Choopan if he brings a similar package to last year.

In Feb., Jake Wood hinted that the Masters Olympia contest would ‘definitely’ return in 2023 (a bodybuilding contest for older athletes). At the time, fans were doubtful about its potential comeback.

The last Masters Olympia competition took place in 2012 and was won by Dexter ‘The Blade’ Jackson. At the beginning of December Wood’s prediction came true, and the return of Masters Olympia was announced for August 2023 after nearly an 11-year absence.

While it was brief, Wood expressed his excitement for the 2023 Masters Olympia show

“The Amateur Olympia and next year there’s also going to be Masters Olympia in [Romania]. It’s a fantastic venue [with] a beautiful city. Again, Selena, she’ll be doing it,” Jake Wood said.

According to Wood, he believes the annual Mr. Olympia contests should always take place in Las Vegas, NV. around October, September, or ‘at the latest’ early November.

“Honestly, my opinion, the home of the Olympia should be Las Vegas but also a conflicting opinion with that is that it should be in October maybe late September, maybe October at the latest — early November,” says Wood. “It should be that way. It’s kind of like can we get it in that timeframe AND in Las Vegas… that’s been a big struggle right now.”

In addition to Wood’s details, Chris Cormier and El Guindy talked about the show’s return and who could possibly contend for the next Masters Olympia title. The possibilities are vast as there are several IFBB pros who have maintained incredible physiques despite stepping away from the stage. Cormier, a decorated veteran in his own right, named Kamal Elgargni as a frontrunner for the 2023 Masters show.

Wood: ‘The Way Kai Greene vs Phil Heath Rivalry Played Out On Stage’ Made It The Best In The Sport

When asked about his favorite rivalry, it didn’t take long for Wood to name the epic encounter between ‘The Gift’ and perennial Mr. Olympia contender Kai Greene.

“Oh boy, there’s so many fun ones, but of course, the one that played out best on stage I think honestly was Phil [Heath] and Kai [Greene]. That hair whip that Kai did hitting Phil, it appeared to hit him in the face, and the expression Phil had after that, like, ‘did you guys just see that?'”

Wood also named the professional rivalry between Jay Cutler and Ronnie Coleman as one of his favorites as well.

“There were some great rivalries. It [Ronnie Coleman versus Jay Cutler] wasn’t as hot or passionate but it was definitely strong, you saw it there on stage.”

“They played up to it, I liked when Breon [Ansley] put his shirt on [Chris Bumstead’s] shoulder and hit the front double biceps and looked crazy,” said Chris Cormier.

“I hope we see some of that at the press conference this year,” Wood said.

Throughout the year, there have been plenty of retired bodybuilders fans hoped to see back on the Masters stage. In October, four-time Olympia Jay Cutler teased a return after showing off his shredded physique posing with a fitness influencer. Fans were quick to speculate about a return, and Cutler was even faster in shooting down the rumors. He later explained that he’s getting back into shape as part of a ‘fit for 50’ challenge.

In a previous Prime Time Muscle podcast, Cormier pleaded for the show to add a rivalry round in the Men’s Open division. IFBB head judge Steve Weinberger also made a special appearance in a later episode and wasn’t against the idea. He broke down the Men’s Open division and said he’d do his best in making sure those involved in beefs get to square off face to face.

RELATED: Bodybuilding Veteran Lee Priest Addresses Masters Olympia Rumors: “If They Made It 50 and Over Sure”

Wood is excited to see the Arnold Classic, Masters Olympia, and Mr. Olympia contests all back on the calendar for 2023. In the meantime, his focus will be on enjoying the 2022 Olympia Weekend.