The bodybuilding legend discussed his role at this year's contest and broke down the Men's Open lineup for 2022 Mr. Olympia. 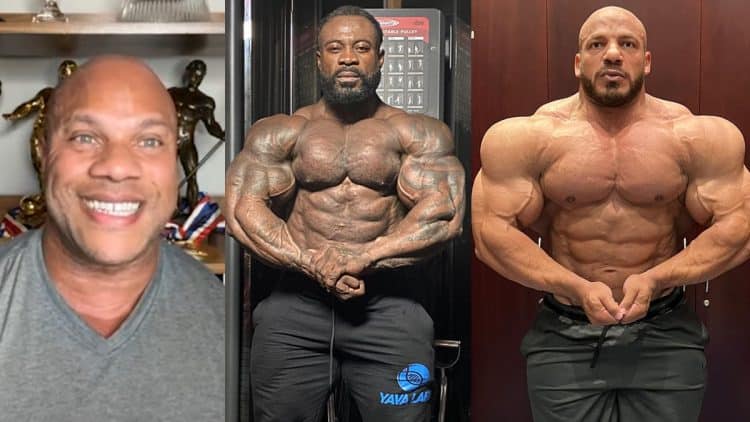 The 58th Mr. Olympia contest kicks off in one week and seven-time winner Phil Heath is breaking down the action in the Men’s Open division. Speaking with Ron Harris from Muscular Development, Heath discussed his role at this year’s 2022 Mr. Olympia contest and what to expect from the Open class.

If there’s a bodybuilder qualified to discuss this year’s Men’s Open lineup at Olympia, it’s Phil Heath. He is tied with Arnold Schwarzenegger in Sandow trophies at seven. “The Gift’s” reign lasted from 2011-2017 and he dominated the IFBB landscape with muscle fullness, roundness, and conditioning. He’s competed with a few of the men who aim to win this year’s title too, like Mamdouh ‘Big Ramy’ Elssbiay, William Bonac, Hadi Choopan, and Brandon Curry.

Aside from the usual suspects from last year’s Olympia contest, new talent made their way up the ladder. Flex Wheeler’s mentee Andrew Jacked (Chinedu Andrew Obiekea) got his pro card and dominated two pro shows to cement his right to stand on the 2022 Olympia stage. And Jacked wasn’t the only bodybuilder to snag a qualification in a short period of time.

Michal ‘Krizo’ Krizanek switched to the NPC and earned his pro card by winning the 2022 Amateur Olympia Italy contest. After claiming the Men’s Open title at the EVLS Prague Pro, Krizo will make his debut at Olympia in one week.

With the contest rapidly approaching, Heath sat down to discuss his role for this year’s Olympia and what to expect from many of the contenders in the Men’s Open.

During the interview, Heath confirmed that he will be a commentator for the Open, along with 212 Bodybuilding and Classic Physique at 2022 Olympia.

“I’m confirmed for the Open, 212 [Bodybuilding] and Classic [Physique]. It’ll be very interesting. Obviously, I understand that category and obviously I’ve put on a show, and I’ve seen that sport grow over time and understand how to adjudicate that as well. But predominantly the male portion.”

According to Heath, if someone like William Bonac brings a ‘bubbly 3D’ look, that will be enough to knock the reigning champion out.

“Everyone does have flaws. He [Big Ramy] even said together on the [Instagram] live we had that if he doesn’t peak a certain way, that will probably open the door for someone else who has that bubbly 3D effect to their physiques.”

“Ramy’s strengths are his size. He’s going to be the widest guy on stage. Is he going to be the most 3D person, I wouldn’t say he would [be] but I’m not sitting next to him right now. We’ll have to wait and see. In order for him to knock this out of the park, he’ll have to be better than he was last year. If they miss, he leaves the door open for Hadi Choopan, Brandon Curry, Nick Walker, the list goes on.”

When the dust settles in Las Vegas next week after 2022 Olympia, Heath predicted William Bonac will get a lot of credit for his muscle density. If Bonac gets into the first call out, ‘The Gift’ wouldn’t be surprised to see him pushing Ramy or Brandon Curry.

“He [William Bonac] has some of the best density and muscle quality in the entire world. He should get a lot of credit for that. He’s going to be crispy hands down. When you look at his muscles, what people have to realize, you got to look at the health of the actual tissue. I always say that about William, his tissue looks healthy.”

“I’m expecting him to climb in there. In my opinion, he’s going to get a chance at that first call out. We’ll see how he manages to sneak past a couple of guys because he is the seasoned veteran including Brandon and Ramy. He’s been there.”

Given how many new debutants will be on stage, Heath is inclined to believe judges may favor some of the newer looks from Derek Lunsford, Andrew Jacked, and Michal Krizo.

“You don’t want to put yourself in a position where people get tired of seeing the same look. Oh, we’ve seen this look before, we’re going to give it to Derek [Lunsford] or Hadi [Choopan]. He says that he’s better, and I’m going to believe it. If he’s eight pounds better, man can I have popcorn backstage.”

When assessing Andrew Jacked and Michal Krizo’s Olympia potential, Heath believes they could find themselves in the first call out.

“I think both guys are going to get a shot at a first call out because the judges are going to have to call them out. No one is safe this year. I haven’t spoken to any judges just so you know. I’m just going by how I see it.”

“They both have their strengths. I could pick them apart like crazy but until I actually see them next to the best of the best, it’s all hearsay. I do like both their physiques. I think they bring a lot of muscle,” Heath said.

Earlier this week, Phil got the chance to speak with the reigning two-time champ Big Ramy. Elssbiay, who is finishing the last stages of his prep, specified that he will weigh approximately 295 pounds on the Olympia stage.

With one of the deepest lineups in years, fans expect fireworks next week at 2022 Olympia. If William Bonac can bring 3D muscle density, Heath is confident he’ll get a chance to push Big Ramy on stage.

RELATED: Jay Cutler ‘Pushing’ Phil Heath to Return at 2023 Mr. Olympia: ‘He Could Do Some Damage’