We might be seeing a boxing match between Robert Oberst and Nick Best very soon! 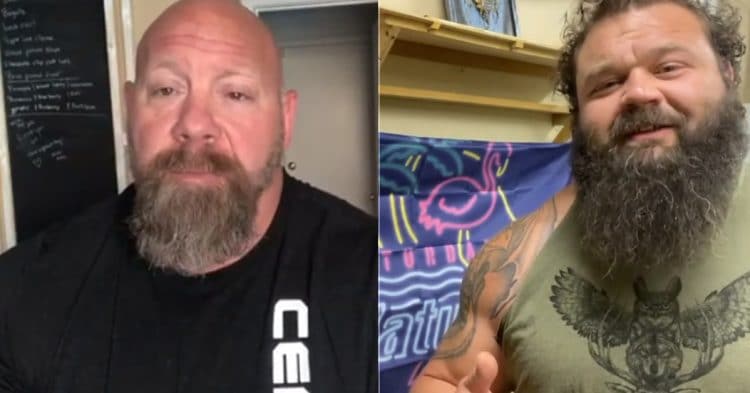 If you’ve kept up with Strongman, then you’re probably aware that Hafthor Bjornsson recently broke the all-time deadlift world record with 501kg. This lift surpassed Eddie Hall’s record and so afterward, Bjornsson called out Hall for a boxing match, which was already in talks for a while now.

So Hall accepted and now, we’re optimistic that the two giants will throwdown in September 2021. Well, they may not be the only card on the day of, because now, a prelim matchup between fellow Strongmen Robert Oberst and Nick Best seems like it could be a real possibility.

So now, they probably want to join in on the fun, and Oberst is suggesting he and Best engage in a boxing match by calling him out.

“We all know Eddie is fighting Thor BUT WHAT ABOUT THE PRELIMS?!?! I’ve seen @nickbeststrongman has been training with @thefrankmir maybe he can show you HOW TO GET KNOCKED OUT!
What do you guys say??? Should I step in the ring?? What do you guys think?? You can’t have a fight in Vegas and not have The American Monster“

Oberst explained that he has seen Best training with former UFC (Ultimate Fighting Championships) heavyweight champion Frank Mir. However, he appeared to not be intimidated by this and is still intrigued by the idea of facing him in a preliminary match.

It seems to be a trend that when two people outside of combat sports call each other out for a matchup, another pair steps in. But boxing and MMA are extremely popular these days and so it definitely makes sense that more people are wanting to try their hand at it.

And in one post where Best responded, Oberst apparently wants a piece of Mir after he’s done with Best.

“I’ll work you over then show @thefrankmir what my boot tastes like,” he said.

Best responded… “Headed to train! You stay here and keep at it!“

Last year, singer Justin Bieber called out actor Tom Cruise for a UFC match although it never went further. Then, 5x World’s Strongest Man winner Mariusz Pudzianowski just called out Eddie Hall. Pudzianowski transitioned into MMA after his career and even tried to convince Hall to join in the latter explained in the post.

However, Hall isn’t interested and is focused on his match with Bjornsson. And now, Robert Oberst and Nick Best could be the prelim bout as anything is possible and it seems they both have an interest in doing it.

Strongman legend Nick Best has continued to push past his limits as he got into his 50s. Nick's insane feats...