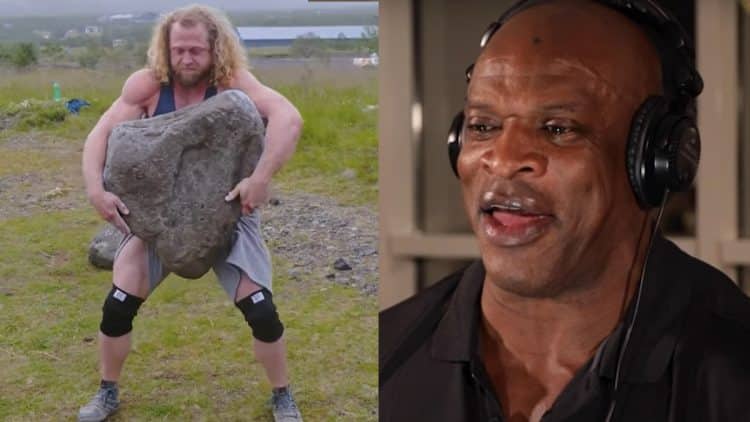 Fitness influencer Jon Call aka ‘Jujimufu’ continues to challenge himself in bodybuilding and at the gym. In a recent video, bodybuilding legend Ronnie Coleman reacted to a series of Jujimufu’s craziest feats of strength.

Jujimufu is once again receiving attention for his jaw-dropping power and flexibility in the gym. He runs a massively popular YouTube channel, where he routinely shows off his wildest gym stunts and lifts. In 2021, Jujimufu competed at his first bodybuilding show placing fifth at the 2021 NPC Worldwide Amateur Olympia.

Jujimufu returned to the 2022 NPC North American Championships with a chip on his shoulder. Many fans of the sport noticed he was off at the show and said he looked ‘watery.’ After placing 11th, Jujimufu clarified that he wasn’t injured. He acknowledged he was ‘flat’ on stage but vehemently denied the use of Synthol injections.

During Coleman’s time on top, his size, muscularity, and work ethic guided him to success. He won a total of eight Mr. Olympia titles before calling it a career. His rival Jay Cutler has spoken honestly about the struggles of keeping up with someone so dedicated to the sport.

In addition to arguably the most successful career in the IFBB, Coleman was recognized for his near superhuman strength. In Coleman’s latest endeavor, however, he’s taking a look at some of Jujimufu’s craziest feats of strength.

For Jujimufu’s first display of strength, he balanced a weighted barbell on the top of his shoulders while mowing the lawn. Afterward, Jujimufu charged forward with a weighted sled before grabbing what looked like Thor’s hammer. The lawnmower sequence left Coleman so impressed he had to rewind to watch it again.

In the next maneuver, Jujimufu performed box jumps before hitting two backflips. Once he finished, the bodybuilder dumped a jug of water on his head. Jujimufu followed that up by demolishing reps on the high-row machine with several weight plates attached to each side.

Using a different row machine, Jujimufu performed reps in the snow with shorts and no shirt.

“No Juji, not in the snow!” Ronnie Coleman said.

For his next act, Jujimufu hit some kickballs lying face down on a stool and then fired off a few deadlift reps. Then, Jujimufu hopped back on another rowing machine.

Jujimufu returned to lift more free weight. This time it’s a 615-pound load with plates and chains attached to the barbell. Moving on, Jujimufu tested his lifting capabilities with a few deadlifts. His first load totaled 555 pounds for a few reps and then he moved up to 610 pounds.

“Show me what you got Juju. Up up up. Way to go! Get another one. You got it! Way to go. Yeah!” Coleman shared.

Jujimufu switched to another unconventional lift. He used a trap bar with a few plates and lifted a man in an ape costume on his shoulders.

In the spirit of Halloween, Jujimufu’s next lift saw him wear a pumpkin on his head, coupled with pumpkin dumbbells. Eventually, the clip devolved into Jujimufu destroying the pumpkins.

Crossing into the sport of strongman, Jujimufu’s last challenge involved him lifting the ‘The Husafell Stone.’ He managed to lift the stone and walk a few feet.

This wasn’t Coleman’s first time reacting to some wild gym videos. Months ago, he looked at popular influencer Bradley Martyn’s wildest gym stunts. He’s also given a raw reaction to some of Liver King’s wildest stunts.

And in Coleman’s last collaboration, he joined powerlifter Larry Wheels. Wheels tested his squat and deadlift strength in the company of the eight-time Mr. Olympia. By the end of the workout, Wheels was knighted by “The King.” After watching Jujimufu’s gym stunts, Coleman finished the video by inviting him over for a workout.