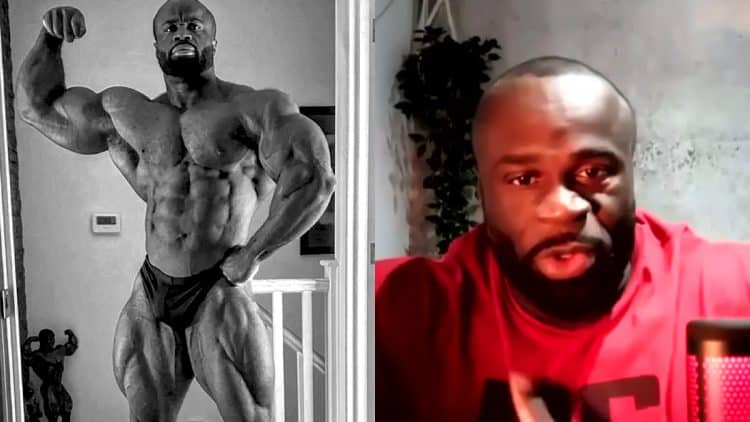 Bodybuilder Samson Dauda is gearing up for his first appearance at the upcoming 2022 Olympia, scheduled for Dec. 15-18 at Planet Hollywood Resort & Casino in Las Vegas, Nevada. In a recent appearance on RXMuscle’s YouTube, Dauda reflected on bulking to over 330 pounds and his goal of placing in the top 10 at 2022 Olympia.

Dauda made headlines in the IFBB for his impressive size and muscularity in the Men’s Open division. He turned in a promising season last year, finishing in the top three at multiple shows. ‘The Nigerian Lion’ put on a stellar performance at the 2021 Arnold Classic UK but narrowly missed out on the top prize to Nathan De Asha. He went on to get third place at the Yamamoto Cup and won the 2021 EVLS Prague Pro.

He was one of the first athletes to secure his entry to this year’s Olympia, but it did not stop him from taking to the stages at the 2022 Arnold Classic and the Boston Pro in March. He ended both shows with a fourth-place finish.

This year’s season is turning out to be one of the most competitive in the last few years. From defending two-time Mr. Olympia champion Mamdouh ‘Big Ramy’ Elssbiay to the surging contender Dauda, the Open division is stacked with talent.

Dauda is determined to make a statement in his Olympia debut. In August, he revealed that he was tipping the scales at a gigantic 330 pounds at the end of the off-season. Dauda followed up with another massive physique update showing off a significantly improved package with sharper conditioning and muscularity last month.

In a recent YouTube video, Samson Dauda shared the uncomfortable truth of bulking up to new weights during the off-season.

“Thing is every time I get to a new off-season weight, the first time we hit it is always uncomfortable. We are always huffing and puffing. This time, hell, I had to walk around with a walking stick it was so uncomfortable. But that’s the first time I’ve hit it. When I go back to it next year, I find it a lot easier, it’ll take a lot less food.

“I’ll be a lot more comfortable at that weight. It always happens the same way each year. First time you hit a new weight, it feels like ‘oh my god! I’m going to die.’ Then you go back to it and go actually it doesn’t feel so bad this time.”

Samson Dauda explained he had to adjust to the new weight after breaking furniture by accident due to his size.

“I broke a lot of things. People don’t understand when you’re that weight you can’t just lean on things, you can’t just sit down anywhere so my armchair in my living room, I broke that in a few weeks. Then I ordered a new leg and that cracked. Leaning on table breaks. I almost broke my friend’s bathroom sink just by leaning on it. You really have to sort things before you just put weight on when you are that size.”

Dauda is targeting a top-10 finish at the 2022 Olympia

‘The Nigerian Lion’ opened up about his ambitions for his first appearance at the Olympia contest.

“Honestly for me, just cracking the top 10 in a lineup this deep. Honestly, being in that top 10 for me is, I will walk away thinking wow! Yeah, that’s a great achievement especially in your first year because as much as it is, you still gotta remember it’s just your first year. You want to be doing this a long time so for me just cracking the top 10 and as well would be the first UK guy to crack the top 10 in their Pro debut or their Olympia debut. I can walk away with that holding my head high.”

Samson Dauda has received major backing from bodybuilding legends, including Dexter Jackson, who predicted Dauda can cause a lot of problems. He added that if Samson comes in shape, he will finish in the top six. Dauda hasn’t been shy about sharing training progress either. In one of his recent workouts, he teamed up with 2021 Arnold Classic champ Nick Walker and former 212 Olympia winner Kamal Elgargni for a brutal training session.

Bodybuilding Hall of Famer Chris Cormier also believes Dauda will be a real threat at the 2022 Olympia. According to Cormier, Samson’s posing, and mind muscle connection make him a versatile threat on the Olympia stage. Time will tell how the debutante performs at his first ever Olympia.