Check out what's in Samson Dauda's grocery cart ahead of 2022 Mr. Olympia 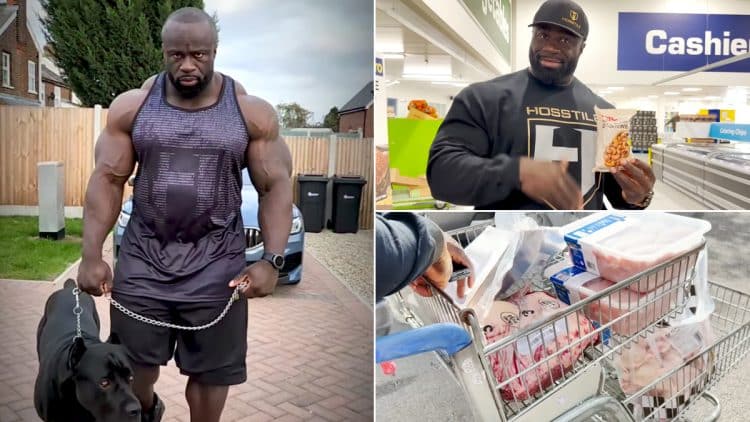 Bodybuilder Samson Dauda is turning up the heat on his preparations as he inches closer to the 2022 Mr. Olympia, scheduled for Dec. 15-18 at Planet Hollywood Las Vegas Resort & Casino in Nevada. In a recent video posted on YouTube, Dauda shared his grocery shopping list as he continues getting ready for the show.

Dauda made headlines quickly as a Men’s Open division standout with his gigantic build. In 2021, he participated in two IFBB pro events and managed to get a spot on the podium in both, finishing second at the 2021 Arnold Classic UK and third at the Yamamoto Cup Pro.

After being edged out by Nathan De Asha at the 2021 Arnold Classic UK, Dauda was determined to win the title at the 2022 Arnold Classic in Ohio. He acknowledged how difficult it would be to face 2019 Mr. Olympia Brandon Curry but believed his lower body would outshine the former champion on the stage. However, Curry dominated the event and earned first place whereas Dauda ended up in fourth. In addition, Samson entered the Boston Pro a week later, but finished in fourth once again.

With just over 11 weeks to go for the 2022 Olympia, athletes are training intensely to bring their best package to the biggest bodybuilding show of the year. Last month, Dauda revealed that he was tipping the scales at a massive 324 pounds in an off-season physique update. Now, he’s making sure his diet is dialed in ahead of the blockbuster event.

In a recent video uploaded to his YouTube channel, Dauda shared his grocery shopping list while in prep for the 2022 Olympia.

Samson Dauda has gigantic caloric intake requirements given his size so he relies on buying large amounts of chicken, steak, and rice, which he believes are very important to his nutritional regimen.

He kicked things off by getting two big bags of sweet potatoes. He then proceeded to purchase a bag of honey-roasted cashews to help with any unwanted cravings. Next, he moved on to the seafood section, where he bought a whole wild-caught salmon.

With around 11 weeks from 2022 Olympia, Dauda is following a strict diet to dial in his physique. He was careful about the foods he bought and decided against some common foods he enjoys in the off-season, like meatballs.

Dauda continued to purchase more products, buying 11 pounds (4.99kg) of lean skinless chicken breast, a massive portion of steak, and a box of 15 dozen eggs for his protein requirements.

To prepare for Olympia, Samson recently partnered with 212 Olympia champion Kamal Elgargni and fellow Men’s Open competitor Nick Walker for a demanding off-season high-volume back workout. With his diet also in check, Dauda is leaving no stones unturned as preparations heat up for 2022 Olympia.