Clarida is training smart to avoid injuries en route to the 2022 Olympia - "I’m not in here trying to break records, hit PRs" 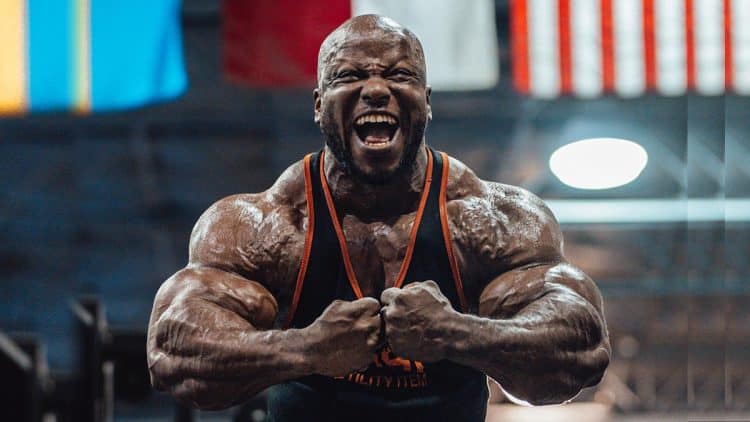 After omitting the arm day from his training routine eighteen weeks out of the 2022 Olympia, Shaun Clarida got back to working the arms recently. Clarida is an American professional bodybuilder competing in the IFBB Pro league. He has called the 212 division his home for the vast majority of his career and climbed to the absolute top, winning the 212 Olympia crown in 2020. However, Clarida lost the title to Derek Lunsford at the 2021 Olympia and finished second.

The 40-year-old made a bold move to the Men’s Open division the same year. In spite of his unusually short 5ft-2in frame for that division, Clarida destroyed the competition at the 2021 Legion Sports Fest Pro and walked away with a win. This victory also qualified him for the 2022 Olympia where Clarida intended to compete in both Men’s Open and the 212 division to make history. However, The Giant Killer recently confirmed that he is ‘coming back for his title’ in the 212 division.

With the 2022 Olympia weekend now closer than ever, Clarida is working on his physique to bring the best version of himself on stage. His training split in the training camp did not have a separate arms day. But two weeks out of the show, Clarida trained his arms and posted the video of this session on his personal YouTube channel. So without further delay, let’s see how Clarida annihilated the high-volume workout.

“If I do a hard set for triceps, right and I use all my mind, all my expenditure blown out in that one set or three to four sets, for me to go into another triceps movement after that, I feel like I won’t be a hundred percent. So if I do a hard set of triceps, I go to the biceps to give them a break.”

Clarida kicked things off with this triceps isolation movement. Apart from working the triceps, the triceps pushdowns are an effective movement for warming up the elbows and getting them primed for the heavy compound movements as the joint is crucial for most of the arms movements. The 40-year-old did this exercise for warming up and took to a biceps exercise next.

Preacher curls are arguably the most potent biceps isolation exercise. Since the triceps rest firmly against the pad, biceps have to engage in the movement without compensation. Clarida cranked out a few solid sets to warm up the biceps with this exercise and took to the first heavy exercise of the day next.

“I only did two exercises and I am f***ing pumped already!” Clarida said after doing the preacher curls.

Clarida took to this exercise as the ‘first official triceps movement’ of the day. The overhead triceps movements put more emphasis on the long head of the triceps and hence it is necessary to incorporate them in the training routine. While explaining what he expected from the training session, Clarida said:

“Two weeks out. I’ve gotta be smart. I’m not in here trying to break records, hit PRs. I’m gonna get a good stretch, a good contraction at the top Still keep the weight moderately heavy to where I feel like I’m working but at the same time be smart and not risk injuries.”

After warming up with a couple of sets, Clarida did a feeder set followed by a few working sets and moved on to the next exercise.

Clarida next performed this exercise to stimulate the biceps muscles. Spider curls emphasize the short head of biceps more than the long head and hence they are useful for complete development of the biceps.

“(Spider Curl) is definitely an ego checker. I’m not gonna be able to go crazy heavy on this, we don’t need to. The goal is to force blood into that muscle and strictly so!” Clarida explained.

After pushing through a few solid sets of spider curls, the Giant Killer went back to working the triceps next.

Supine triceps extensions, more commonly known as skull crushers, are an exercise that primarily works the medial head of the triceps and has carryover benefits to increasing the bench press strength. Clarida got a few sets of this exercise under the belt with slow and controlled motion to add stimulus to the triceps.

The 2021 Legion Sports Fest Pro winner took to the incline push-ups next and did a few sets.

Stability in the shoulder joint, full elbow flexion and joint alignment are three important criteria for rating a triceps exercise. The reason? When these three things are in order, triceps receive the most stimulus. Cross body cable triceps extensions are one such movement. Clarida performed this exercise unilaterally and did a few sets to failure.

Clarida worked his biceps with the one arm cable curls using the cast grip handle next. The handle has a larger diameter towards the thumb and index finger while the other end towards the pinky has a smaller diameter. This shape enables a more natural and firm grip. While explaining the technique employed for this exercise, The Giant Killer said:

“It’s almost like a drag curl. I am keeping the weight behind me, pulling up. As you can see I am bracing the chair (with the free hand) just in case to make sure I don’t jerk too much or use too much lower back or rocking motion. This keeps me locked in place.”

The New Jersey native went back to working the triceps next and performed this overhead movement to target the long head of triceps. Clarida used the rope attachment to do the exercise and cranked out some solid sets before taking up the final exercise for the day.

Clarida calls this superset a ‘two for one special’ superset as the exercises in this superset target the forearms and the brachialis muscles. Clarida performed the overhand grip EZ bar curls to work the brachialis and forearms and superset this exercise with an old school forearm blaster grip machine. This superset served as the finisher to Clarida’s arms training session as he called it a day after blasting through all the sets in rapid succession with minimal rest periods.

2022 Olympia will take place from Dec. 15 to 18 in Las Vegas, Nevada. The reigning 212 Olympia champ Derek Lunsord has received a special invitation to compete in the Men’s Open division. As a result, 2019 212 Olympia champ Kamal Elgargni and Keone Pearson will be Shaun Clarida’s biggest challenges at the 2022 Olympia. However, predicting the outcome is tricky as pointed out by 4-time Mr. Olympia Jay Cutler recently.

One year he was eighth in the rankings and the very next year, he came close to winning the title. Veteran bodybuilder Samir Bannout is also backing Pearson for winning the 212 Olympia crown. While Shaun Clarida has all the tools to become the champion again, he has to stay focused and maintain the intensity until Dec. 18 to rewrite history.