Two-time Ms. Olympia Andrea Shaw will look to defend her title but will have to fend off 19 contenders who plan to steal her status as champion. 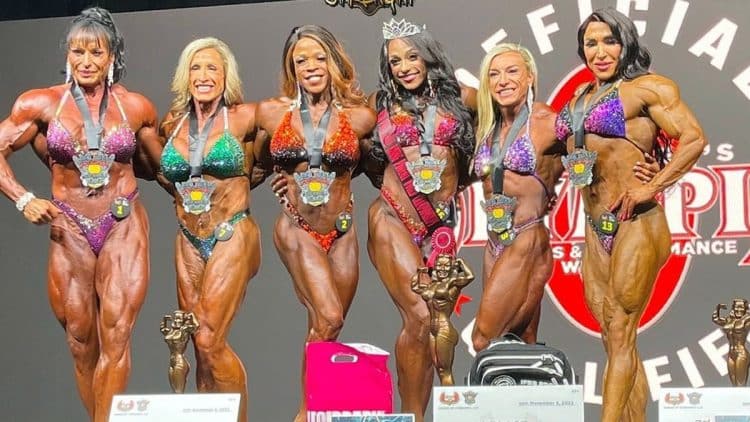 This year’s Olympia is almost here. To commemorate Joe Weider’s 58th annual Olympia contest, a total of 20 Women’s Bodybuilders will wage war in hopes of securing the sport’s most prestigious title. Competitors will meet from December 15 – 18 in Las Vegas, Nevada at the Planet Hollywood Resort & Casino venue. This article will break down and predict the top five finishers of this year’s Ms. Olympia contest.

The Ms. Olympia contest debuted in the Olympia back in 1980, 15 years after the Mr. Olympia contest came to fruition. In 2014, the contest was discontinued after fanfare demand was brought into question. And for a while, they competed under the Rising Phoenix promotion, which is now one of the premiere organizations for female bodybuilders in the IFBB.

In 2020, Rising Phoenix promoter Jake Wood assumed control over the Olympia brand and again implemented Ms. Olympia as an integral part of Joe Weider’s Olympia Weekend. With physiques that rival their male counterparts in the Men’s Open, Women’s Bodybuilding has never been more popular. For the last two years, Andrea Shaw has left a path of destruction in her wake. After back-to-back Olympia victories in 2020 and 2021, Shaw plans to reinstate herself as champion in just a few days.

However, the reigning champion will be tasked with facing a number of familiar faces. Runner-up at 2021 Olympia Helle Trevino as well as third place finisher Margie Martin and fourth place Mona Poursaleh are both eager to exact their revenge. Additionally, Shaw will be pushed by fifth and sixth place 2021 Ms. Olympia finishers Irene Andersen and Michaela Aycock.

Find a full list of Women’s Bodybuilding competitors expected to compete at 2022 Olympia below.

Michaela Aycock’s consistency in the IFBB makes her a dangerous opponent on any stage because she’s accustomed to the pressures of performing in front of judges. Last year, she placed sixth at Ms. Olympia, and showcased some of the best conditioning in the lineup.

Instead of taking time away from the sport to build her physique, she remained busy throughout the 2022 season. Her hard work paid off too. In May, she dominated at the Atlanta Pro and earned first place. She used that momentum at the 2022 Rising Phoenix Arizona Pro but faced a deep lineup of talent, including Andrea Shaw. In the end, Michaela finished third, respectively.

Given her ability to come in shredded combined with her last few performances, we predict Michaela Aycock will improve her position from last year and finish fifth at 2022 Olympia.

Irene Anderson is on a mission to win her first Ms. Olympia title this year. She led a busy season competing at two shows during the most recent season. At the 2022 Lenda Murray Savannah Pro, she brought an impressive package, but the competition featured a number of top-tier competitors. She finished the contest in ninth place as a result.

A few months later, Anderson brought her talents to the 2022 Romania Muscle Fest Pro, and while she found success at the show, she ultimately placed third. Many fans hold her in high regard due to the overall balance of her physique. That is one of the many weapons she’s using to combat some of the best Women’s bodybuilders in the world next week.

In November, Irene made an appearance at the most important Women’s Bodybuilding event outside of Ms. Olympia and placed sixth at the 2022 Rising Phoenix Arizona Pro. Considering the steady improvements she’s made all season along with her most recent performance, Fitness Volt believes she has the tools to secure fifth place at 2022 Olympia.

Mona Poursaleh has been inching her way up the Women’s Bodybuilding ladder for some time now. She’s made noticeable improvements to her physique over the past few months, and many fans believe this might be the year she breaks into the top two. She is an elegant poser and used that as a weapon at her last few shows.  At the recent 2022 Rising Phoenix Pro, she placed fifth.

Poursaleh finished fourth in her debut at Ms. Olympia last year. Taking her 2021 Olympia performance and Rising Phoenix shows into consideration, we believe she has the potential to move into forth place in Las Vegas next week.

A post shared by Margie The Marvelous One (@marvelousv)

This will be Margie Martin’s fourth Ms. Olympia appearance and she’s on track to make it one to remember. Her lower body is arguably one of the best in the IFBB’s Women’s Bodybuilding division. A veteran of the sport, Martin has been competing at a high level since 2014. In 2020, Margie registered her best performance on the Olympia stage when she placed second to Shaw.

Martin finished third at last year’s Ms. Olympia contest. The only two athletes who surpassed her on the scorecards were Helle Trevino (who recently suffered a shoulder injury) and two-time Ms. Olympia winner Andrea Shaw. Instead of competing at IFBB events during the season, Martin took the time to build her physique in hopes of challenging the reigning Ms. Olympia, Andrea Shaw.

We believe the momentum Martin gained from placing in the top three at Olympia for two years in a row will guide her to a 2nd place finish at 2022 Ms. Olympia.

Heading into 2022 Olympia, many fans predict Helle Trevino could possibly challenge Shaw for the title. After all, at last year’s Olympia, she managed to finish second. In addition, Trevino placed runner-up to Shaw at last year’s 2021 Rising Phoenix Pro. Having narrowly missed out on a few titles to Shaw, Trevino would like nothing more than to upset the dominant champ this weekend.

As arguably the most well-rounded Women’s Bodybuilding athlete on the planet, it’s going to take a herculean effort to knock Andrea Shaw off her throne. She has won the Ms. Olympia crown for the last two years. In addition to that achievement, she’s a three-time Rising Phoenix Arizona Pro champion.

Shaw’s aesthetics and overall muscularity is a dynamic combination she’s used to find success on stage. She is a crafty veteran and doesn’t get tired even during longer posing routines. Shaw has a sterling résumé, which we believe she will add to in just one week.

The Fitness Volt team predicts that Andrea Shaw will hold onto her status as champion this year at the 2022 Ms. Olympia show. Our decision is supported by her proven track record, impressive physique updates, and past Olympia victories.

For more information on past Ms. Olympia winners, a comprehensive breakdown of the division’s history can be found below:

READ: All Ms. Olympia Winners — Bodybuilding Queens & The History of the Show

For Joe Weider’s 58th annual Mr. Olympia Weekend, fans can expect extensive coverage, breakdowns, analysis and more from the Fitness Volt team. Before the show takes place, let us know who you believe will walk away with the prestigious Ms. Olympia crown!