Bodybuilder Shaun Clarida Confirms Plan to Compete in 212 at 2022 Mr. Olympia: ‘I’m Coming Back for My Title’

After tons of speculation, Clarida has announced he will compete in the 212 division at 2022 Mr. Olympia: 'I've Got Unfinished Business' 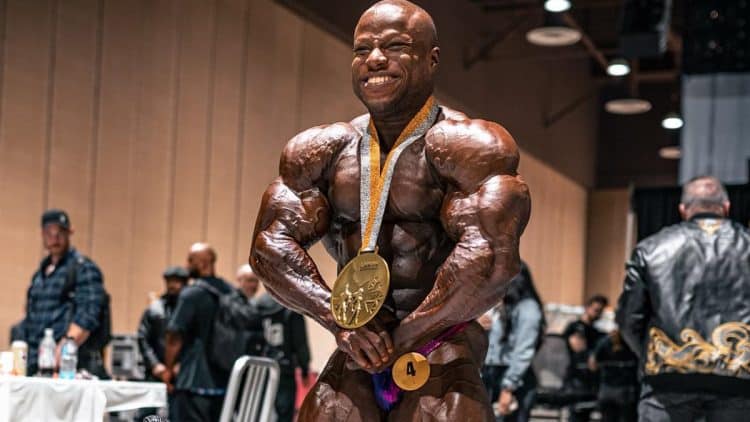 “As much as I would have loved to battle it out with the big boys in the open, that’s going to have to wait for now. I’ve got unfinished business in the 212!” Shaun Clarida shared.

In 2020, Clarida reached the pinnacle of his career when he won the 212 Olympia title. In the process, he defeated divisional mainstays like former 212 Olympia winner Kamal Elgargni, the late George Peterson, and reigning 212 Olympia Derek Lunsford.

While Clarida lost his title to Lunsford last year in second place, he didn’t let the unfavorable outcome affect his confidence. He used the loss as fuel to build an even mightier physique and earned the nickname ‘Giant Killer’ after winning his Men’s Open debut in 2021. En route to the impressive victory, Clarida defeated bodybuilders who towered over him at the Legion Sports Fest Pro like Canada’s Regan Grimes and Sergio Oliva Jr.

All season long, Shaun made no mention of which division he would pick despite having qualifications for both. Initially, his hope was to compete in the Open and the 212 at 2022 Olympia. However, Olympia brass specified that he would have to pick one.

In August, rumors swirled about his decision. Iain Valliere suggested Shaun’s chances of competing in the Open stood at a ’92 percent.’ Once Shaun heard of the gossip, he pleaded with his fans that unless it comes from his mouth directly, it’s ‘fake news.’ Well, the time has come. Shaun Clarida himself has made it crystal clear that he intends to regain his 212 title in just four weeks.

After careful consideration, Shaun has decided to pursue his second 212 Olympia title instead of competing against the biggest bodybuilders in the IFBB.

I’M COMING BACK FOR MY TITLE!” Shaun Clarida wrote.

During the video, Shaun Clarida had the following to say about his recent announcement to compete in the 212 at Olympia:

“The Olympia title is something that I cherish close to my heart. The goal is to win multiple championships. I stay tunnel visioned and I’m ready to fight whoever is there. This is not just about winning titles but creating my legacy in this sport.

Losing my title in 2021 was the fuel and motivation I needed to come back this year bigger, better, and more determined than ever. I’ve got unfinished business and I’m coming back for my title. I’ll see you in December,” Shaun Clarida said.

At this year’s Olympia in 212 Bodybuilding, Clarida will face a number of surging title contenders. Lunsford took Shaun’s title in 2021, but after accepting a special invitation for the Open class, it remains unclear which category Lunsford is planning to compete in. All signs would suggest the Men’s Open division, but he and his coach have not yet specified with 100 percent certainty what their plan is.

Aside from Lunsford, Kamal Elgargni is also slated to compete next month. As a former 212 Olympia winner, Elgargni understands the sacrifices necessary to reach the top of the sport. He attempted a pair of Men’s Open Pro shows earlier this year but was outsized at both contests in Tampa, Florida and Texas, respectively.

Known for throwing around heavy weight, Clarida’s training habits have garnered comparisons to eight-time Mr. Olympia Ronnie Coleman. Regardless of the body part, Clarida attacks each training session relentlessly. One of his latest workouts saw him crush his chest/delts and just this week, Clarida shared a demanding glutes and hamstrings training session in the middle of contest prep.

RELATED: Bodybuilder Shaun Clarida Pulverizes His Arms To Get a Massive Pump

Given his history of success, many fans have labeled Shaun Clarida as a frontrunner to win the 212 Olympia title again. In just four weeks, fans will find out if Clarida is capable of regaining the 212 title he lost to Derek Lunsford last year.