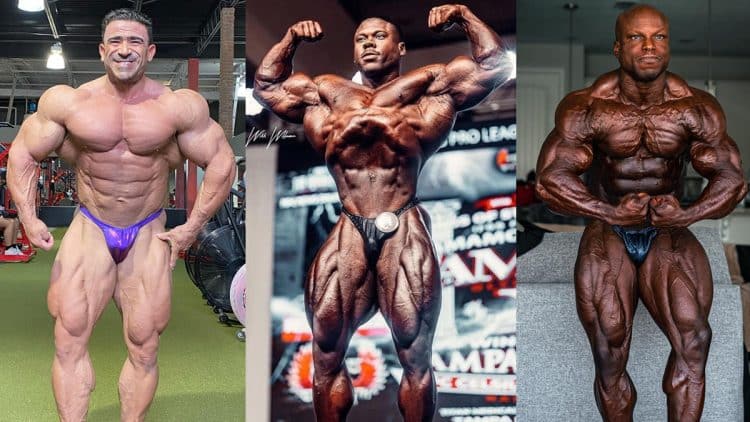 Former Mr. Olympia Samir Bannout may have retired a long time ago but maintains a strong presence in the sport with his analytical skills. In a recent Old School Labs video, Bannout shared his thoughts on the competition in the 212 division at the upcoming 2022 Olympia.

Preparations are heating up for one of the most competitive and exciting seasons in Olympia. While the mass monsters of the Men’s Open division tend to get the most attention, 212 competitors are rising in popularity as well. From powerhouse Kamal Elgargni to returning former king Shaun Clarida, this year’s showdown will feature multiple champions.

Derek Lunsford showcased an incredible package in a guest posing appearance at the 2022 Pittsburgh Pro and earned a special invite for the Open class at the 2022 Olympia. It remains unclear which division he’s chosen to compete in but all signs point to the Open. He held his own against the Open standouts like Hunter Labrada, Nick Walker, and former Mr. Olympia Brandon Curry without appearing undersized.

Seasoned bodybuilding veteran Kamal Elgargni is a prime frontrunner to get a second trophy in the 212 division. Elgargni made his maiden Olympia appearance in 2018, where he placed third to conclude an impressive season. He returned the next year to win his first Olympia trophy in 2019. Although he dropped his title, Elgargni managed to reach the podium in his next two appearances, grabbing second place at the 2020 Olympia and third place at the 2021 Mr. Olympia.

Last month, he teamed up with Men’s Open competitor Nick Walker for a high-intensity workout focused on enhancing chest and bicep muscle development. The duo shared tips while motivating each other for Olympia. Lunsford later teamed up with Elgargni and Walker a few days later to demolish a heavy back workout. However, according to Bannout, Elgargni will have trouble when he battles against Keone Pearson.

In a recent video on the Old School Labs YouTube channel, Samir Bannout sat down with John Hansen and Nick Trigili to give his breakdown of the competition in the 212 division for the upcoming 2022 Olympia, scheduled for Dec. 15-18 at Planet Hollywood Resort & Casino in Las Vegas, Nevada.

In addition to Samir Bannout, Trigili and Hansen discussed the possibility of Kamal Elgargni winning the 212 championship this year.

Hansen: “I think Shaun will beat him. Kamal is a great bodybuilder but when he won he wasn’t going up against Shaun and Derek was way off that year.”

Elgargni will face intense competition from another returning former champion, Shaun Clarida. About a week ago, Clarida announced his decision to compete in the 212 division at the Olympia instead of competing with the biggest athletes of the Open category. He found new motivation after losing his title in 2021 and stated he needed to come back for some unfinished business.

Along with Clarida, bodybuilder Keone Pearson has emerged as a favorite to win his maiden trophy at the Olympia. After starting his professional career in the Classic Physique category, Pearson made the switch to the 212 division in early 2020. He won his divisional debut at the 2020 Chicago Pro and secured a direct qualification for the Olympia. Pearson ended up withdrawing from the event due to personal reasons. He followed up with a dominant victory at the 2021 Chicago Pro and earned qualification for the 2021 Olympia, where he placed 14th.

Keone proved his consistency time and time again. He took home the top prize at the 2022 Tampa Pro earlier this year to secure his third straight direct qualification to the Olympia. In September, he gave fans a sneak peek into his preparations for the nearing event while smashing past a grueling chest workout.

According to Bannout, Pearson boasts the best combination of mass, density, and aesthetics. For these reasons, he believes Keone will defeat Elgargni and Clarida at the show.

Bannout: “Keone is very dangerous. In my opinion, probably Keone would be the biggest threat at 212. Not to say Shaun Clarida isn’t also dangerous. If you put them next to each other, Keone is a little bit bigger, don’t forget he’s very symmetrical, has an incredible rib cage, small waist, beautiful shoulder to hip ratio. Clarida has roundness to his muscles but it’s really hard to say. If you put a 210 pound guy next to one who’s 180lbs, and the 200 pound guy has a better flow, we will see. It won’t be a walk in the park for Clarida.”

“Honestly his physique is probably the best, he will have the best physique for sure. I don’t really see weaknesses on Keon. He’s unbeatable in that double biceps so I can see him winning the show.

“Physique wise, he has the edge. If they are both the same quality, both shredded, I say Keone will take it. All I need from Keone is to come sliced to the bone and he should be able to take it based on the natural structure he has.”

“For the pretty muscle, I would go with Kamal but for the gnarliness and freakiness and hardness, then Shaun Clarida. For overall mass, class and beauty, I’ll go with Keone.”

Keone Pearson is confident he is at the peak of his powers, biggest and leaner than ever. ‘The Prodigy’ recently shared a high-volume arms workout that he utilized to add more definition to his muscles in prep for the 2022 Olympia. He was already at a low body fat percentage and will look to dial things in further as the competition gets closer.

It will be interesting to see how the former champs look next to each other on stage at the 2022 Olympia. As mentioned by Bannout, the judges will likely have a hard time choosing the 212 champion based on how close the top three competitors are.