Clarida says that impending fatherhood is giving him an extra push to work hard. 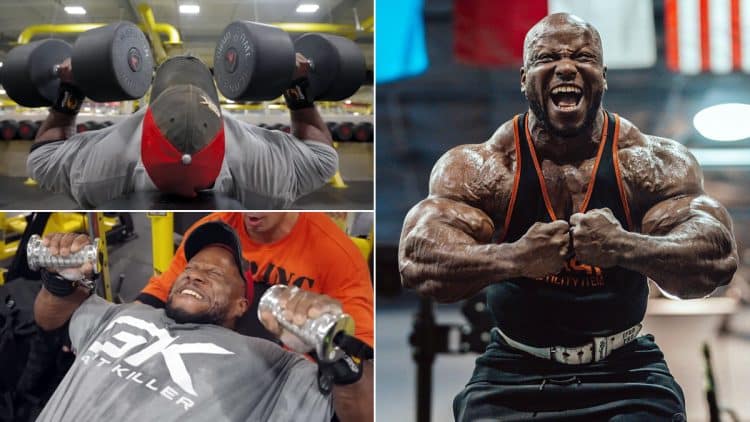 Soon-to-be-father Shaun Clarida is putting work in the gym with added motivation. The IFBB Pro bodybuilder has competed in the 212 division for the majority of his career. Winning the  212 Olympia crown in 2020 marks the high water mark of Clarida’s bodybuilding career. In spite of losing the top spot to realigning champion Derek Lunsford at the 2021 Olympia, Shaun Clarida is still a top contender in the division.

The 40-year-old surprised the bodybuilding community by transitioning to the Men’s Open division. Even with a short 5ft-2in frame, Clarida went up against the big guys at the 2021 Legion Sports Fest Pro and emerged victoriously. The win earned him a direct qualification to compete in the Open division at the 2022 Olympia.

If 212 Olympia winner Derek Lunsford competes in the men’s open division at this year’s Olympia, as he was invited to do a month ago, former champion Shaun Clarida will probably try to win back his title. To make progress in that direction, Shaun Clarida recently demolished a chest and delts workout in the gym.

The 40-year-old returned from a trip to Nevada state recently and went through the training session. So without further delay, let’s see how Clarida worked his chest and delts.

Clarida stated that the energy levels eight weeks out of 2022 Olympia are ‘so-so’ but his progress is ahead of schedule. He is six to eight pounds heavier compared to the same time last year.

“So all those improvements have been made… I would say those poudages are put more from the legs and definitely in the back I believe,” Clarida added.

The former champ will welcome their child a couple of weeks after the 2022 Olympia which is a motivating factor for him. With that extra push, Clarida finished the dynamic warm-up routine and jumped right into the workout.

Clarida started the training session with this chest exercise. However, the bench was kept at a very slight incline that could be easily mistaken for a flat bench.

“Eight weeks out of Olympia I am trying to be smart, trying to be safe. But at the same time, I believe in pushing the weight if you still can push the weight. That’s just how I have kind of always trained.”

While many competitors prefer to reduce the loads and switch to using machines more at this stage of the prep, Claria has always stuck to more compound free weight movements. That is exactly what he is doing in this prep camp as well.

“Machines definitely have their place and you can definitely see me use them out today. But what built my base, maintained that muscle and on stage gave that dense, hard granite-like Dorian, Ronnie look is the heavy poundages,” Clarida added.

Clarida performed two heavy working sets of this movement with 150lbs dumbbells.  He then used a generous amount of chalk to perform the top set of 160lbs for eight to ten reps. A back-off set of 110lbs followed the working sets and Clarida took to the next exercise.

Clarida is a huge Smith machine fan and loves that he can focus on the actual movement rather than worrying about balancing the bar on this piece of equipment.

Incline bench press or any free weight movement for that matter can potentially increase the chances of injury.

“I want to make sure I am safe but at the same time I still want to push the weight. I feel like I can still get the equivalent of a barbell with the Smith machine.

The 40-year-old did a few working sets of Smith machine incline bench press with incrementally heavier loads. Following this, he performed a double drop set. Clarida started with three plates on either side and performed eight to ten reps. For the first drop, he removed a plate from both sides and repeated the same rep range. The former champ then performed as many reps as possible with one plate on each side and took to the next exercise.

“The focus has always been the upper chest for me. That’s a kind of area that really needs to come up,” Shaun Clarida said before taking up the next exercise.

Shaun Clarida learned this exercise from watching Men’s Open division bodybuilders Iain Valliere and Brett Wilkin. He tried it for the first time a couple of weeks before this video was recorded and liked the way it felt. Clarida stated that it is not wise to join the dumbbells together while performing dumbbell presses. However, when you do it with cables, it can give a really good contraction in the upper pecs.

Clarida used Prime Fitness Cast handles for this movement. These handles are shaped like a tapering cylinder which facilitates a more firm grip, ergonomically. The former Olympia 212 champion did some explosive sets of cable chest press and took to the next exercise.

This movement served as a finisher to Shaun Clarida’s chest exercises. The barbell floor press is similar to the barbell bench press. However, the person doing it lifts the bar while lying on the floor instead of a bench. Clarida believes that it is an excellent mass gaining exercise and hence prefers to include it in his training routine.

“It also helps people who have shoulder issues because you’re not coming all the way down. So obviously the movement is going to stop at the shoulder width here because triceps hit the floor. So you’re driving up the movement keeping constant tension the whole time,” Shaun Clarida added.

Clarida wrapped up the chest exercises after a few sets of this movement and jumped into the shoulder workout.

Clarida stated that his shoulder workout will mainly focus on the posterior and Lateral deltoids. Since he already performed a chest workout, the anterior delts also got a good amount of work. Therefore the shoulder routine did not include overhead pressing movements.

Shaun Clarida started the shoulder workout with this rear delt movement. The rear delts / posterior delts are difficult to activate with most shoulder exercises like lateral raises or overhead presses. Therefore it is worthwhile to include rear delt specific movements in the shoulder routine for complete development.

“I feel like people neglect the rear delts. They want to get right into shoulder presses, laterals and then they’re wondering why when they turn their back and they got no rear delts,” Clarida said.

After a few solid sets of reverse pec deck flyes, Shaun Clarida took to the next shoulder movement.

Clarida next targeted the lateral deltoid muscles with standing dumbbell lateral raises. He performed a few good sets of this exercise and moved on to the next one.

Clarida used a selectorized machine for this exercise to work the lateral and anterior deltoid muscles.

“This is probably my favourite pressing movement in the gym so far. This machine is similar to that old Hammer Strength plate loaded machine…” Clarida said.

The 40-year-old got a few solid sets of this movement under his belt and jumped right into the next shoulder exercise.

This was the next shoulder movement in Clarida’s shoulder workout. He did a few sets of this movement with a rope attachment to work the rear delts and took to the next exercise.

The 40-year-old wrapped up the training session by doing some more lateral deltoid work and performed the seated lateral raises on a selectorized machine.

With Lunsford’s potential move up to Open division, 2019 Mr. Olympia 212 winner Kamal Elgargni is Shaun Clarida’s primary challenge at the 2022 Olympia. Additionally, The Giant Killer wants to make history by competing in both Men’s Open and the 212 division. While he is yet to get confirmation from the Olympia management for the same, it can be a moment of special importance in bodybuilding history.

How To Do Reverse Nordic Curls – Muscles Worked, Benefits, and Alternatives