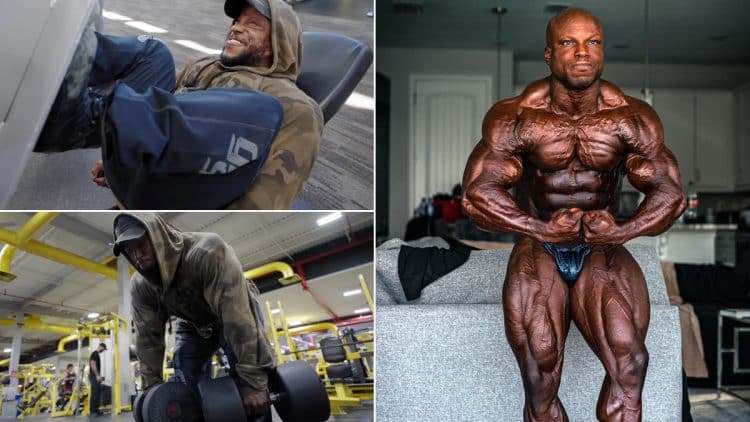 Shaun Clarida is working hard to maintain the size and density in his legs six weeks out of the 2022 Mr. Olympia, scheduled for Dec. 15-18 in Las Vegas, NV. Clarida is an American IFBB Pro bodybuilder that has competed in the 212 division for the vast majority of his career. Winning the 2020 212 Olympia title has been the highlight of the 40-year-old’s bodybuilding career. After getting dethroned by reigning champion Derek Lunsford at the 2021 Olympia, Clarida made a bold move up to the Men’s Open division in spite of his relatively short stature compared to the other Open Pro bodybuilders.

While this was not a highly anticipated affair initially, Clarida shocked the bodybuilding community with a dominant win in his Open division debut at the 2021 Legion Sports Fest Pro. The victory earned Clarida a direct invitation to compete in the Men’s Open division at the 2022 Olympia.

Clarida intends to make history by competing in both Men’s Open and the 212 division at the 2022 Olympia. But at the time of writing, it is not clear whether he will compete in both or one of the two divisions. The 40-year-old recently went through a lower body workout in prep for the 2022 Olympia. The video of this session was uploaded on Clarida’s YouTube channel. So without further delay, let’s look at the detailed account of this session and some of the tips shared by Clarida.

Shaun Clarida goes through a punishing hamstrings and glutes workout

At the beginning of the video, Clarida explained that retaining as much muscle as possible is his priority. He said:

“The priority here is obviously to grow into the show, try to keep as much size and density on the legs as possible. As we all know, when you’re doing cardio, the legs deplete a little bit. So in my mind, I was going to keep banging the legs hard and keep them nice and full. So that’s what we can do today,” Clarida stated.

Clarida’s current workout routine includes three days of training calves. He clubs the calves exercises with other muscle groups and prefers sticking to basic movements like donkey calf raises and standard seated or standing calf raises. On this day, the 40-year-old did the seated calf raises on a plate-loaded machine. This exercise works the soleus muscle that lies underneath the more visible gastrocnemius muscle. Clarida performed two to three heavy working sets and one drop set of this exercise.

After ‘absolutely smoking’ the calves with the previous exercise, Clarida targeted the front part of the calves with this movement. While speaking about the importance of working this muscle, especially from a competitive bodybuilder’s perspective, Clarida stated:

“One part I know a lot of guys neglect is the tibia – the front part of the calf muscle. So when you see a front shot like a double bicep… I want to complete that calf off. Over the years, I’ve done it the old way using a dumbbell, sitting on a bench, and curling up.”

However, Clarida is now using a specialized machine that solely focuses on working the front of the calves.

“This completes the calf all around… Got your gastrocnemius, got your soleus and then you got your tibia. You want to complete that all around. You don’t want to half a** anything,” Clarida added.

After doing a few sets of tibia raises on the machine, Clarida took to the next movement.

After getting a considerable amount of work for the calves in, Clarida took to this hamstring isolation movement next. The Giant Killer stated that he has been doing this exercise every week and sometimes even twice a week to fire up the hamstrings. Clarida has had a weak back for a while due to herniations. As a result, other hamstring-focused exercises are challenging for him to perform on a regular basis. Therefore seated leg curls are a go-to hamstring movement as they put the stress ‘exactly where it needs to be’ in Clarida’s own words.

“Seated leg curls have probably been the bread and butter of my hamstring growth,” Clarida said.

Clarida explained his approach for maintaining the muscle and having a thick grainy look heading into the contest and said:

“If you want to have that grainy, hard, dense look… You’ve got to keep the compound movements hard and heavy. I don’t believe in going like four to six rep range. Sometimes I’ll be happy but I like to keep my reps anywhere between eight to twelve reps.”

After performing some heavy sets of seated leg curls, Clarida moved on to another variation of this movement.

The seated leg curls are proven to be more effective in hamstrings development due to a greater range of motion. However, it is important to include different variations of an exercise to emphasize different parts of the same target muscle. Clarida next took to the lying leg curl to fire up the hamstrings further and performed solid sets.

While the dumbbell RDLs are effective in strengthening the entire posterior chain muscles, they are one of the best movements for hamstrings development. Clarida explained the correct way to get the most out of this exercise and said:

Clarida did a few sets of this exercise with incrementally heavier dumbbells and took to another compound movement next.

The leg press is a compound movement that works almost all lower body muscles, but the main emphasis lies on the quadriceps. However, placing your feet higher on the pushing platform can make this exercise more hamstrings-focused. Clarida took to the high leg press to work the hamstrings further and performed a few solid sets. He used incrementally heavy weights in each consecutive set and went on to do some glute work next.

Clarida started the glute work with barbell hip thrusts. While explaining the importance of this exercise in his training routine, the Giant Killer said:

“Probably I would say the bread and butter of glutes. So when you pack on that size, that glutes like sculptures give you that thick, full, hard, and round glute look.”

Clarida did a few heavy sets of this exercise maintaining an eight to twelve-rep range and took to the next movement.

Clarida prefers to keep his exercises simple and perform basic movements for the most part. To work the glutes further, he took to the cable step-ups and performed solid sets of this exercise. Following this, Clarida did a few sets of bodyweight step-ups & glute kickbacks and wrapped up the training session.

Clarida has taken a cautious approach to his training throughout his bodybuilding career, which has helped him enjoy competitive longevity. At 40 years of age, The Giant Killer is still a 212 Olympia title frontrunner. Reigning champion Derek Lunsford has received a special invitation to compete in the Men’s Open division at the 2022 Olympia. In the event of Lunsford moving up, the 2019 212 Olympia champ Kamal Elgargni will be Clarida’s biggest challenge in the 212 division. Given the possibility of Clarida competing in both divisions simultaneously, we might witness a historic moment when the Olympia weekend kicks off on Dec. 15 in Las Vegas.

You can watch the full workout video below, courtesy of Shaun Clarida’s YouTube channel: