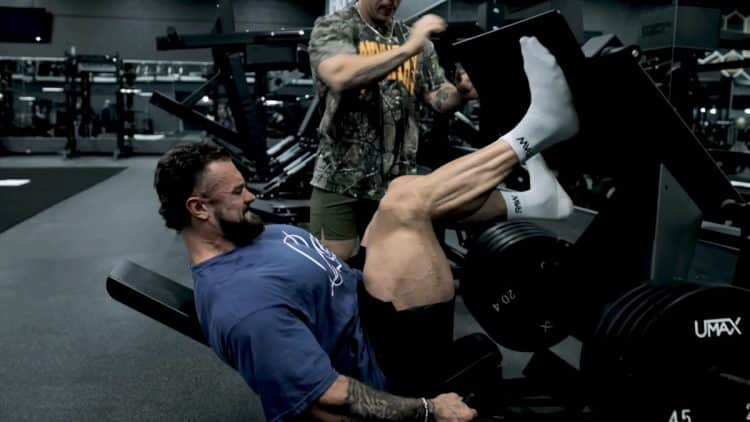 The hard work Chris Bumstead is putting into the gym will allow him to maintain a lead over his competition at the prestigious Olympia contest next month. The Canadian bodybuilder has arguably gained the most popularity and success among professional bodybuilders worldwide. Since capturing the Classic Physique Olympia title from the former champion Breon Ansley at the 2019 Olympia, CBum has retained it at the 2020 and 2021 Olympia in dominant fashion. The 27-year-old will attempt to create history by making it four in a row at the 2022 Olympia.

Bumstead is currently in his competition prep and has persevered through some challenging situations so far. After hurting his knees during the early stages of prep while playing basketball, the 27-year-old suffered a quad injury. However, Bumstead has refused to slow down and employed unique ways to keep making progress.

CBum recently traveled to Nashville, Tennessee for the grand opening of his friend’s Carbon Culture gym. He annihilated the workout at the same gym after a long day of work that included a Q&A session with over a thousand people. The video of this workout was uploaded on Chris Bumstead’s personal YouTube channel. So without further delay, let’s see how Chris Bumstead fired up his hamstrings.

Bumstead warmed up his lower body with lying hamstring curls and walking lunges and filled up his muscles with blood. Knee joints are crucial in performing most lower body movements. Hence it is of utmost importance to sufficiently warm them up before every lower body workout. Hamstring curls are an effective way of achieving this without putting a lot of stress on the knees.

Bumstead got the party started with this compound movement to work the lower body muscles. While the dumbbell RDLs are effective in developing the entire posterior chain, hamstrings are one of the muscles that benefit the most from it. CBum did the first set with 100lbs dumbbells. Applying the progressive overload principle for added resistance, CBum used incrementally heavy loads and did the next two sets with 120lbs and 150lbs dumbbells, respectively. He did the fourth set of 150lbs to failure and moved on to the next exercise.

While both lying and seated leg curls are effective in working the hamstrings, studies have shown that the seated hamstring curls are more efficient in developing the hamstrings as they provide a greater range of motion. The reigning Classic Physique Olympia champ performed a few sets of this exercise and jumped into the next movement.

While the standard leg press is more quad centric, placing the leg higher takes the stress off the quads and engages the glutes and hamstrings to a greater extent. Bumstead performed a few sets of hamstring-focused leg presses unilaterally and took to the next one.

Bumstead next worked the hip abductor muscles. This group of muscles includes gluteus medius, gluteus minimus, and tensor fasciae latae (TFL). Collectively, they are responsible for moving the leg away from the body and also to help rotate the leg at the hip joint. After doing a few sets of this movement on the machine and took to the most intense phase of this workout.

CBum finished the workout with this superset to absolutely fire up the hamstrings and get the most out of his training. He first performed the seated calf raises to work the soleus muscle (inner calf) that lies underneath the gastrocnemius muscle. He superset this exercise with arguably the most effective hamstring isolation movement – standing leg curls. The quadriceps are firmly pressed against the pad during this exercise. As a result, they cannot compensate during the movement and hamstrings do all the work. In principle, standing hamstring curls can be seen as the ‘preacher curls of the lower body’.

Bumstead did all the sets in this superset in rapid succession with minimal rest periods to increase the aerobic intensity of the workout. He performed a set of donkey calf raises at the end and wrapped up the hamstring training session.

Back and Quads Exercises

After wrapping up the hamstrings routine, Bumstead sprinkled some pull-ups, pulldowns and some quads exercises in the workout and wrapped up the training session.

Chris Bumstead is the champion of arguably the most stacked division of the IFBB Pro League. While he does have plans to retire in near future, the reigning champion is not letting that prospect meddle with his competition prep. Bumsted has also ended his coach-client relationship with Iain Valliere for the latter to be able to focus on his own bodybuilding career.

Famed bodybuilding coach Hany Rambod is Bumstead’s new coach for the 2022 Olympia. While all these changes and injuries might seem like big hurdles, Bumstead has dealt with some difficult situations in the past and still emerged victoriously. Additionally, he has looked amazing in some of his most recent physique updates. It will be interesting to see how he manages to maintain the lead over the rest of the division on Dec. 15 in Las Vegas.