Despite some recent predictions, Tia-Clair Toomey will not be retiring just yet. 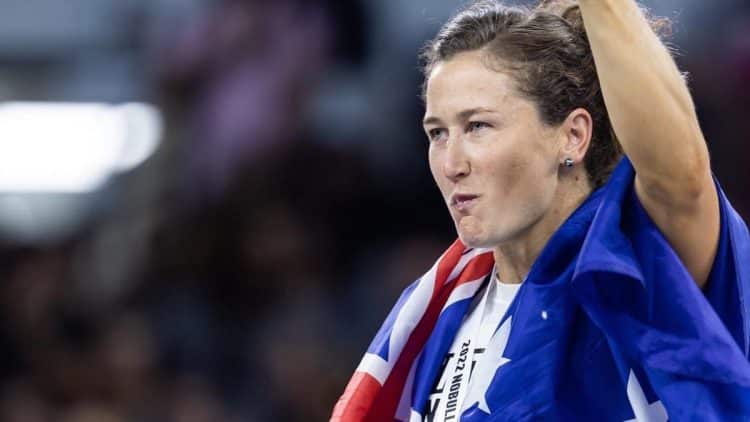 Tia-Clair Toomey made history at the 2022 CrossFit Games, as she became the first Individual athlete with six Fittest On Earth titles. Having eclipsed the previous record of the 5x CrossFit Games winner, Mat Fraser, many fans thought that this would be enough for Tia-Clair to retire. The rumors spread fast and wide, so it seemed like it was just a matter of time before Tia-Clair would announce the news herself. The good news comes from Toomey, which goes in the opposite direction of what was previously hinted at.

Ever since Tia-Clair Toomey had her winning speech at the 2022 CrossFit Game, she managed to maintain some tension. Well, the official Instagram account of CrossFit Games has now revealed that Tia-Clair will be coming back for her 7th title at the 2023 CrossFit Games. The source for this news is apparently Tia-Clair’s interview with a local news station in Nashville, where she was asked if she will compete at the CrossFit Games again.

““Yeah, that’s the plan, you know. Actually, coming up at the end of October is the Rogue Invitational which is held in Austin down in Texas. And then next year the season starts around February. And then it’s just getting ready and prepared for the 2023 season.”

Related: Tia-Clair Toomey Talks Recovery From Back Injury Going Into the 2022 CrossFit Games

Although she mentioned the 2022 Rogue Invitational, which will take place on October 28-30, in Austin, TX, Tia-Clair Toomey will not compete there. Instead, she will be there to enjoy the show and meet some fans. However, Tia-Clair will be back to competing very soon, but in a quite unusual manner. She will compete in the Teams division at 2022 Down Under Championship, which will take place on November 18-20, at the WIN Entertainment Centre in Wollongong, New South Wales. Tia-Clair recently had her first training with Brooke Wells in preparation for this contest.

Before starting her 2022 CrossFit season, Tia-Clair Toomey also ventured into other sports. Most notably, she wanted to secure her place in the 2024 Olympics through bobsled. She was not successful in doing so and the added bodyweight made it harder for her to come back to CrossFit. However, apart from coming second at the 2022 CrossFit Open, Tia-Clair managed to win every following stage of the season.

If Tia-Clair Toomey managed to qualify for the Olympics, it would be her second time doing so. She also appeared at the 2016 Olympics, where she competed in Olympic weightlifting.

Here is a video insert from Tia-Clair’s recent interview:

Related: Check Out Tia-Clair Toomey’s 4000+ Calorie Diet That Led Her to Victory At the 2022 CrossFit Games

Clearly, Tia-Clair Toomey’s reign has been the greatest era of CrossFit so far, so it’s a blessing she’ll continue for at least one more season. Her success is unlikely to end in the near future, since no one has been able to beat her in the past six years. From this point onward, anything Tia-Clair accomplishes will just cement her legacy in CrossFit.