The 292-pound mass-monster is dialing in preparations as he eyes his Pro card at the upcoming Amateur Olympia Italy contest. 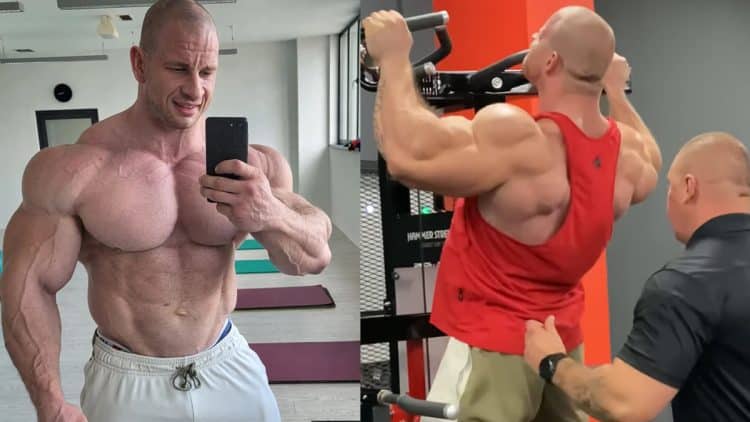 Bodybuilder Michal Krizo is ready to make a statement in the IFBB Pro League despite having yet to earn his Pro card. In a recent YouTube video, Krizo shared a high-volume back workout in preparation for the upcoming 2022 Amateur Olympia Italy contest.

Michal Krizo, 32, recently made the switch from the IFBB Elite Pro League to the NPC a few months ago. After making the transition, fans were counting down the days until he got the chance to compete against Men’s Open competitors in the IFBB Pro League. But first, the promising standout must earn his Pro card, and he plans to do that at the 2022 Amateur Olympia Italy contest.

Weeks ago, he went on a legends tour in North America, with his first stop being Las Vegas, Nevada to see decorated bodybuilding coach Milos Sarcev. The first impression left “The Mind” impressed, explaining that the pictures online aren’t doing Krizo justice. Moreover, Milos said that if he improves his back, then Krizo will be a top Olympia contender.

In addition to Sarcev, Michal visited four-time Mr. Olympia Jay Cutler. After posing in front of the bodybuilding legend, Cutler predicted Krizo will be very ‘dangerous’ when he makes it to the 2022 Olympia stage, assuming he’s able to win his next show in two weeks. Cutler added that muscle fibers like Krizo’s are rare nowadays and mentioned that he saw similarities between him and seven-time Olympia Phil Heath.

Krizo made it clear earlier this month that he would like to place in the top 10 at 2022 Mr. Olympia later this year. He specified that he would also like to finish in the top six at Olympia in 2023. With his next show scheduled to take place on October 8, 2022, Krizo gave fans a taste of what preparations are looking like at this stage.

After his high-volume back workout, Krizo practiced posing. His coach was impressed with his leg development roughly two weeks out from his scheduled contest.

“You got to come in there [confident] and be like, ‘thanks guys’, bye,” says Krizo’s coach (Alexander “Šaňo” Hlobik).

Krizo said that his upcoming show is a waste of time and labeled it an “unnecessary detour” to 2022 Mr. Olympia.

Before wrapping up the video, Krizo looked at his abs, and then performed one more set of dumbbell pullovers. Since his switch to the NPC, Krizo has been an open book, revealing his diet, supplement stacks, and training sessions to his fanbase. One of his latest workouts saw him tackle a brutal chest training session.

Many in the bodybuilding community believe Krizo has a bright future in the sport. Chiefly among them is 1983 Mr. Olympia winner Samir Bannout. He suggests that Krizo has the physique and tools to not only qualify for 2022 Mr. Olympia — but win the contest. Bannout added that even rising Olympia contender Andrew Jacked would not have the firepower necessary to stand against Krizo.

Krizo is maintaining his weight of 292 pounds as preparations heat up. With plans of being as big as possible for the Olympia stage, Krizo is looking forward to facing some of the sport’s most popular bodybuilders as soon as he gets his Pro card.

Watch the full training video below: