In a revealing interview, "The Quadfather" reflected on his minimal bodybuilding cycle of two compounds: 'I took the very minimum' 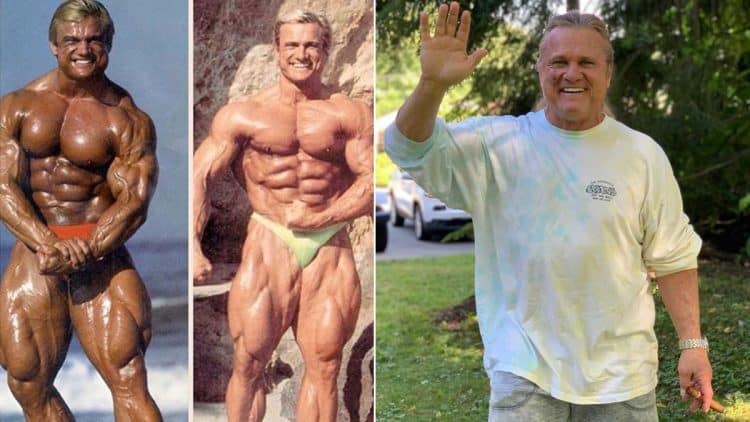 Tom Platz is a Golden Era bodybuilder known for having some of the most defined legs of his generation. In a recent interview, Platz revealed his ‘minimal’ career cycle of two compounds and gave his thoughts on steroid regimens being used by active bodybuilders today.

A Mr. Universe winner, Tom Platz developed a reputation for his strength and persistence in the gym. He competed mostly from the 1970s to the 1980s, where he graced the Mr. Olympia stage a number of times. During his tenure in the sport, Tom has shared the stage alongside bodybuilding legends like seven-time Olympia winner Arnold Schwarzenegger.

Despite never winning a Sandow trophy, Tom was respected in the community for his wild feats of strength, especially when it came to squatting weight. Even at the age of 65, Platz has proven to the masses that his lower body strength isn’t going anywhere, anytime soon.

Apart from his accomplished career as well as his impressive quads, Platz has also established himself as a pioneer in the field of leg training through his unique methods and ideologies.

Tom Platz and Fred Hatfield engaged in a less well-known squat contest in February 1992 to determine who was the strongest man at the WBF. Fred Hatfield won the contest, which was described as being very close. Therefore, a second squat-off was decided to be held in Germany.

Among the fitness industry, the second squat off is remembered as the Great American Squat Off.

Steroids and drug regimens in bodybuilding have become a hot topic. Powerlifters, strongmen, and bodybuilders are often transparent nowadays and don’t mind sharing the details of their cycle with fans and followers.

As of late, the bodybuilding community has been shaken by a number of deaths in the community, which began with Shawn Rhoden passing away last year due to suspected heart complications.

This year saw the concerning trend continue as Cedric McMillan tragically passed away in April, though his wife said details surrounding his death have yet to be made official. Bodybuilder and NPC/IFBB judge Jerry Ward also died last month, and many have suggested a heart attack to be the culprit. In Platz’s opinion, bodybuilders are going to run into problems if they continue to push excessive amounts of gear.

Tom Platz Reveals Lifelong ‘Minimal’ Bodybuilding Cycle of Two Compounds: “That’s All I Ever Did”

In a video published on YouTube, Tom Platz shared that he has only used Winstrol and Deca for the entirety of his life/bodybuilding career.

“I got very strong. I was squatting six plates before I even took a drug.” Tom Platz said. “I gotta tell you though because it’s on my mind — and nobody is going to believes me, they’re not going to believe me when they hear this. 20 milligrams of Winstrol (Stanozolol) a day, the little pills, the little pink pills and one shot of Deca (Nandrolone) a week, 100 milligrams That was my life’s drug cycle. That’s it. That’s all I ever did.” said Tom Platz

According to Tom, he’s never taken testosterone or designer drugs. He ran a ‘minimum’ cycle and clarified that he was taking fewer drugs than female bodybuilders.

“I never took testosterone. I never took any of these designer drugs. I took the very minimum. I took less than the girls would take but it really worked for me. It worked for me. It gave me longevity, a livelihood, to this day. I think a high dosage of drugs can really lead to problems as we’re seeing today.”

Platz compares drugs in bodybuilding to a car show. The bodybuilder’s physique is the car, and the drugs they take are the wax to buff the paint.

“I’m just trying to be authentic and real, and drugs was like waxing the car. I remember I went to the Terry Wogan show in England one time, and said, ‘drugs aren’t going make a Volkswagen into a Ferrari,’ you know. But it’s like taking your car to the car show, the drugs — you get your car a wax job. You gotta be the guy, you gotta be the monster, the muscle guy, the muscle girl first, before you start depending upon drugs to do it for you.”

He added that he’s unsure of the current drugs used by bodybuilders and said it’s become a different world.

“But I see what some of the guys do now with androgens and how they affect sarcoplasm, which is a fluid substance around the muscle, as you know. It’s not really sailor muscle gains, it’s more water being distributed. I’ve come to respect and understand modern day — I think we’re in a pharmacological quagmire.” Platz said.

“It’s a different world. A little sidetrack: for me, when I first got into bodybuilding, I thought I had to stay in my apartment and take a ton of drugs and eat every hour. Platz added. “Bodybuilding to me was about the girls and the beach, bodybuilding and training and the tank tops and stuff.”

Platz believes the bodybuilding lifestyle has changed since his time competing in the sport.

“Abundance and prosperity and living the dream. Now, it’s like, I’m a hermit. I live by myself in a dark apartment and take a shit load of drugs — and I hope I win. Why would any men or woman want to go into that sport.”

Tom isn’t the only veteran or bodybuilder that believes two compounds are most effective. Three-time reigning Classic Physique Olympia champion Chris Bumstead recently shared his steroid cycle. C-Bum is only using two compounds and said he believes his ‘decreased’ cycle is resulting in a better look.

Fellow Golden Era bodybuilder Samir Bannout also gave his thoughts on Bumstead’s cycle. Bannout approved and said that Arnold Schwarzenegger ‘at his best’ was only using two compounds as well.

While Tom Platz has long stepped away from the sport, his opinions on steroid cycles are highly valued given the wealth of experience he has. Despite the differences from when he competed, Tom has come to respect and understand the way in which modern bodybuilders use cycles.

Bodybuilder Blessing Awodibu: ‘It’s Going To Be Crazy In The Olympia Lineup’ With Andrew Jacked