After coming razor close to securing his second Arnold Classic title, William Bonac is adding muscle mass with plans of making a statement at Olympia later this year. 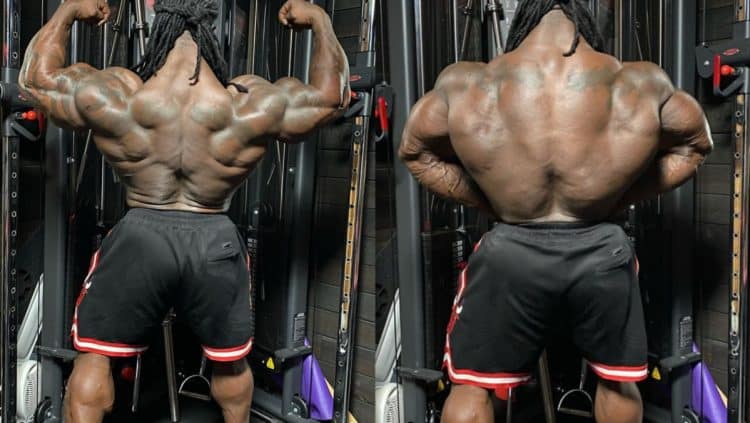 Men’s Open bodybuilder William Bonac is celebrated for his excellent conditioning, which he’s maintained in large part due to his unwavering work ethic. In a rare off-season physique update, Bonac gave fans a sneak peek into the improvements he’s making ahead of the 2022 Mr. Olympia contest.

The Men’s Open landscape in bodybuilding is arguably the most exciting it’s ever been. With names like 2021 Arnold Classic champion Nick Walker, Olympia top finisher Hadi Choopan, and Hunter Labrada in the mix, athletes are attacking preps like never before to combat each other on stage. Though, Bonac will have more than contenders to deal with when he competes at the show. Winter is coming, and two-time Mr. Olympia champion Mamdouh “Big Ramy” Elssbiay intends to defend his title.

William Bonac left quite an impression with his fan base as of late. After his runner-up performance to Brandon Curry at the 2022 Arnold Classic, Bonac is packing on the pounds to ensure he brings his best package to date to 2022 Mr. Olympia.

2022 Olympia is scheduled to take place from December 15 to the 18th, in Las Vegas, Nevada. However, before Bonac felt comfortable entering the most prestigious show of the year, he made it clear that he planned to fix his Gynecomastia, which held him back from a victory at the Arnold.

Before going under the knife, Bonac earned his qualification to compete at Olympia when he won the 2022 Boston Pro, defeating the likes of Justin Rodriguez who took second and third place finisher Steve Kuclo. Vowing to fix his Gynecomastia and abs during his victory speech, Bonac said he won’t be making any excuses when he competes at Olympia later this year.

In a recent post made to Instagram, the 2020 Arnold Classic winner revealed that he’s currently pushing the scales at a staggering 260.8-pounds.

“Was not supposed to post my recent pic, but im so excited with the improvements I made in a few months, that I felt like sharing it with my IG family, fans , & supporters.

Went from 105kg to 118,3kg since I started my off-season prep with my coach @thedietdoc & trainingspartner @candrick29

I have 2kg more to go 2 reach our goal!
Brick by brick, leaving no stones unturned in December @mrolympiallc 2022👑” William Bonac wrote.

The Boston Pro champion showed off an insane back double bicep shot, which is one of his strongest poses. Judging by his latest update, Bonac has managed to add muscle mass without sacrificing conditioning.

Bonac’s loss at the 2022 Arnold Classic triggered controversy among top figures in the sport. Bodybuilding veteran Lee Priest was surprised that Bonac’s Gynecomastia prevented him from winning the title in Ohio. Priest believes that plenty of other bodybuilders have won shows with washed-out abs and gyno.

The Australian bodybuilder used eight-time Mr. Olympia, Ronnie Coleman, as a prime example, suggesting that “The King” won the Olympia crown with Gynecomastia and a bloated midsection that was more evident than Bonac’s.

Renowned coach Milos Sarcev and four-time Mr. Olympia Jay Cutler also chimed in on the discussion. Sarcev said that Curry’s shape and balance attributed to his success but thought Bonac outmuscled the former Mr. Olympia in many poses.

Cutler argued that Bonac refused to hit a traditional ab and thigh pose, which he believes played a role in the loss. The bodybuilding legend supported his claim by comparing when seven-time Olympia winner Phil Heath lost to Shawn Rhoden in 2018 for similar reasons.

During his time away from competing, Bonac has kept busy coaching fellow Boston Pro winner and Classic Physique star Urs Kalecinski. They worked together to build their hamstrings and Bonac offered the “The Miracle Bear” tips anywhere he could.

With redemption on his mind, Bonac plans to enter 2022 Olympia with the best package of his career. If his recent update is any indication of his current progress, Bonac is on track for an explosive winter.