Is Reolly Winklaar hanging up his posing trunks? The veteran recently coached William Bonac in preparation for 2022 Olympia with a brutal shoulder workout. 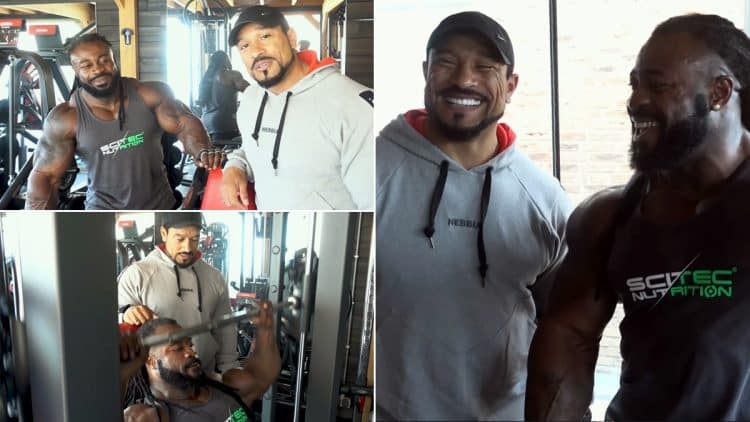 Dutch bodybuilding sensation Roelly Winklaar quickly established himself as a threat in the IFBB Pro League with a jaw-dropping upper body. It’s unclear if Winklaar is still competing actively, as he recently trained Men’s Open standout William Bonac in preparation for 2022 Mr. Olympia.

Roelly Winklaar’s full chest and popping biceps were some of his best attributes on stage. His relentless work ethic guided him to success in the Open class for over 20 years. During his time competing, Roelly was a consistent top ten finisher at the prestigious Mr. Olympia contest. Known for his activity levels, Winklaar made a career out of competing often.

“The Beast” turned in his best performance at the 2018 Mr. Olympia contest, where he came in third place behind seven-time Olympia champion Phil Heath, and winner, Shawn Rhoden. His bronze performance also earned him the first-ever People’s Champ award. Returning the next year, Roelly took on four IFBB Pro League shows, which included a fifth place finish at the 2019 Mr. Olympia before earning gold at the Yamamoto Cup.

After taking time to rebuild his physique, Roelly took on another handful of shows in 2021. He reached the podium twice — securing second place finishes at the 2021 Europa Pro Championships and the Yamamoto Cup. His last show came at 2021 Olympia, which resulted in an 11th place performance.

As time passed, it appeared Winklaar was stepping away from the sport because he was sporting a downsized physique. However, it remains unclear if that is the direction he’s looking to go at this point in his career. The 45-year-old is now coaching other Open competitors with his spare time though, one of which is a former opponent in 2020 Arnold Classic winner William Bonac.

Bonac has made a considerable impact on the Open class as of late. He earned the 2020 Arnold Classic title before finishing in fifth at the Olympia contest months later. After dropping to sixth place at 2021 Olympia, Bonac vowed to bring improvements at his next show. This year, Bonac nearly won the 2022 Arnold Classic title, but, Brandon Curry was crowned champion in the end. Despite the unfavorable result, William returned a week later and won gold at the 2022 Boston Pro show.

Note: Sets and reps were unavailable based on the footage provided

“We’re just going to do a couple workouts with you, shoulders. I know you already have enough but it’s never enough in the world of bodybuilding right? I’m here now in the Netherlands.” said Roelly Winklaar.

“If there’s someone that you can learn from, especially with the workouts and training, it’s gotta be Roelly. He’s got the biggest shoulders and the biggest arms in the world. Let’s go man. I’m going to warm up. I’ve been skipping my shoulders for two weeks now so I’m going to feel it definitely.” William Bonac said.

After firing off the first set of dumbbell lateral raises, Bonac says that he’s going to try to remember to speak English for his YouTube audience instead of Dutch.

In between sets Roelly, explained that everyone is different when it comes to taking rests in between exercises.

“When I train, I don’t take rests. But, I have to care about everybody [else] because they are different. Other people need their rest.” Roelly Winklaar said. “Today you feel like me because you train with me. Let’s go.”

After a few sets, Winklaar spots Bonac to ensure adequate range of motion.

“What we could do now is just dropset six times, four times, dropset, six times.” He’s going to do six reps for four sets.” Roelly explained.

“I think when we go too heavy with this, we have to watch out for injuries because we are going too deep on this.” Bonac warned.

During this particular exercise, Winklaar told Bonac to make sure to stretch the recruiting muscles as much as possible.

Bonac moved on with standing dumbbell front raises next and Roelly helped count his reps.

After wrapping up the workout routine, Bonac shared his final thoughts.

“Pumped up man. My arms man, I can’t feel it no more. You know, thanks Roelly. I won’t invite you no more. I’m kidding man. Thank you brother. I appreciate it. We always got love for each other. Wish we could see this more in bodybuilding. Bonac said.

Bonac is leaving no stone unturned in preparation for 2022 Olympia. In addition to his intense training with Roelly, Bonac gave fans a glimpse into the calculated bulking diet he’s using to bring the best physique of his career. The strictness of his preparations looks to be paying off as “The Conqueror” checked in with his followers recently, clocking in at a staggering 260.8-pounds.

RELATED: Roelly Winklaar Owns Up To Having A Bad 2021: ‘Next Year You Will See A Different Roelly’

With 2022 Olympia on the horizon, preparations are heating up for everyone. Winklaar’s tenacity in the gym will assist Bonac when he’s back on stage later this year. As of this writing, it remains unclear if Roelly Winklaar plans to compete anytime soon, but he is embracing his role as a prep coach.