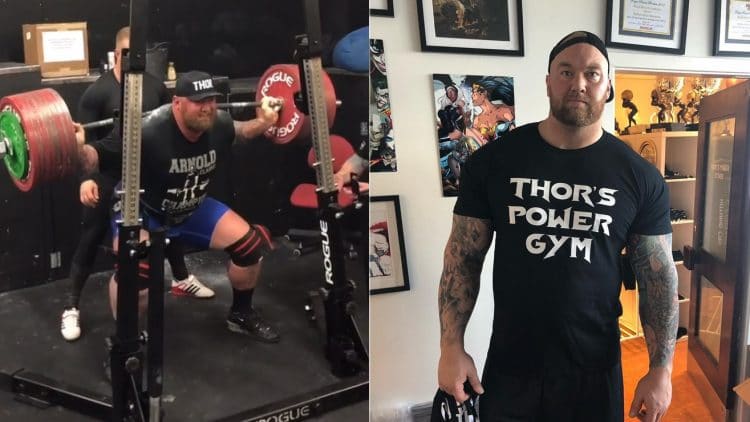 It’s not often we see such a superhuman talent such as Hafthor Bjornsson but his monster-like strength never ceases to amaze.

“Thor”… “The Mountain”, The Icelandic Strongman has some impressive nicknames but what’s even more impressive is how freakishly strong he is. The current World’s Strongest Man Champion and actor on HBO’s “Game of Thrones” (The Mountain) can add another impressive accomplishment to his resume.

A week after bench pressing 245kg/539lbs, he set a personal record by completing a squat of 445kg/980lbs (With knee wraps only) and the crazy thing is… it looked as if he got it up without a struggle. Could this mean he could break the 1,000-pound barrier to join the elite “squat record holders” of the world? It seems entirely possible at this point considering he has so much more in him.

After all, he will go down in history as one of the strongest men ever, so for him to reach these numbers should be a no-brainer.

Bjornsson announced he would be competing at a powerlifting meet on December 15, which is called “Thor’s Powerlifting Challenge”, and it will take place at the Iceland Open Expo in Laugardalshöll, Reykjavík, Iceland.

With his impressive numbers so far, it could be anyone’s guess as to what his total will be. If he keeps lifting like this, well… he will surely exceed the 2,000-pound mark but can he break 2,500? Who knows. There’s no doubt he could, eventually (If he doesn’t at the upcoming meet).

Bjornsson could be closing in on Andrey Malanichev’s record total of 2,513 pounds, and we want to see him accomplish the feat of surpassing that number.

Could 2018 be the year where Hafthor Bjornsson breaks the all-time “lifting total” record?

Thor Bjornsson's record-breaking and 'highly controversial' 501kg deadlift attempt is just around the corner. In another, unrelated news, "Giants Live"...

As Hafthor's potentially historic deadlift world record attempt approaches, the controversy and drama around it gets bigger.  First, this was...

Even when the entire planet is fighting a common enemy and everyone is locked away inside their homes, The Mountain...

These days the entire world is one giant lockdown and everything is looking like a Mad Max movie.  The streets...