Men's Open standout Jacked says he wouldn't be where he is today without the help and guidance of powerlifter Larry Wheels. 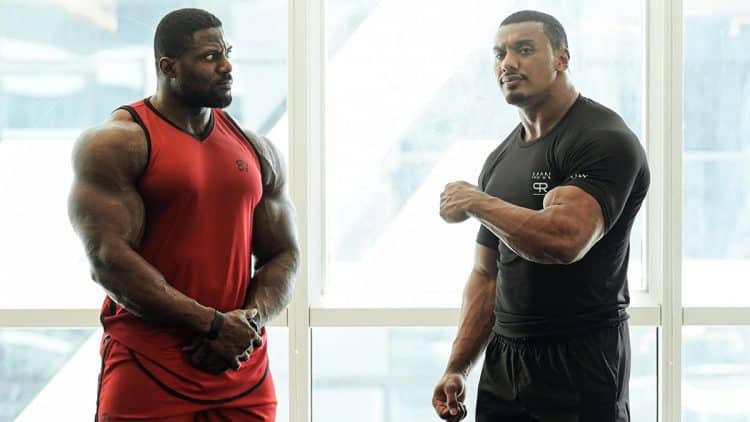 According to Open class bodybuilder Andrew Jacked, powerlifter and strongman star Larry Wheels has had a considerable impact on his blossoming career. In a recent interview with retired legend Flex Lewis, Jacked revealed how Larry Wheels helped get his bodybuilding career started.

“He was surprised to see me taking up his challenges. That’s why we’ve established that brotherhood,” said Andrew Jacked.

Andrew Jacked emerged as one of the most promising rookies this year after earning his pro card in a dominant fashion at the 2022 Arnold Amateur Bodybuilding contest. His ability to retain muscle mass and conditioning all while sporting a slim waist makes him a dangerous opponent for anyone. Jacked has trained alongside elite-level talent in preparation for his campaign as a pro bodybuilder.

Before making waves in Ohio, Andrew attracted a lot of attention training and posing alongside four-time Arnold Classic champion Flex Wheeler. In addition, Andrew has been putting in work at the Dragon’s Lair Gym in Las Vegas, NV., pumping iron next to seven-time 212 kingpin Flex Lewis and bodybuilding guru Milos Sarcev. Jacked’s training continues to intensify as he is expected to compete at the 2022 Texas Pro, scheduled for August 12th-13th.

Before rocketing in popularity as a Men’s Open competitor, Jacked remembered Wheels encouraging him to start an Instagram account after the two trained together for the first time.

“I was training with a friend of mine, a client of mine, at one of his friend’s gym and I saw Larry Wheels there doing a video. I didn’t know him because I didn’t know who was popular on social media. As a guy who sees another guy, we did the eye stuff, and he’s like okay cool.

So, I think the next day I was about to train the guys, it’s 8 A.M. In the parking lot, Larry just got out of his car, and I got out of my car and we connected.” Andrew Jacked shared on ep. 12 of Straight Outta The Lair.

Jacked said Larry didn’t believe he wasn’t on Instagram until after their training session.

“He’s like, hey man, you training? And I’m like yeah, I’m training with my friend here. I’m like, ‘cool we should have a training session.’ I say, ‘you’re training alone?’ He said, ‘yeah I don’t have a partner.’ I’m like, ‘me too.’ So we connected and started to train. Even after the session, when he said what’s your Instagram, I told him ‘I don’t have.’ He’s like, ‘no.’ He didn’t believe me until after the session.”

Andrew said it was actually Wheels’ assistant who came up with the Instagram handle Andrew Jacked.

“Shout out to Larry Wheels for creating this monster.” Flex Lewis told Andrew.

“From first sight, we connected. We went straight to his hotel room. Thinking about the Instagram name, I told him, ‘hey man, I don’t have any idea what to say.’ I was bringing up all my names, and the assistant said, ‘Andrew Jacked is good. You just Andrew Jacked.’ Jacked told Lewis.

After the account was created, Larry made a story featuring Jacked, and the bodybuilder said it resulted in an avalanche of around 20,000 followers.

“That’s how it started. I think the first time he made a story and I got like 20-something thousand [followers]. I was even asking him, what do I post, what do I use as a caption? Sometimes, I put a picture up, and I’m like what do I say and I look at it two or three days. Andrew said. He says, ‘come on bro, it’s Instagram.’ Every other day, every two days, put something there and I’m like, ‘ah come on man.'”

Jacked Reflects on Training with Larry Wheels: “Larry Has Played a Big Factor in My Life”

Jacked revealed that he didn’t know how strong he was until training with Larry Wheels.

Andrew says the time training with Larry has improved his mentality. He called Wheels a ‘wonderful’ person who was sent by God to help him.

“I still call him the big bro because he’s someone that will push you past your limits. You train with Larry Wheels, you’ll mentality automatically [goes up]. He’s a wonderful guy. People have said some bullshit about that guy but he’s a very genuine guy.

He’s an open book. A wonderful human being. I think that is a person whom God sent to take care of me. To put me where I am now.” Jacked explained.

Grateful for the guidance, Jacked will make his pro debut in Texas in just under one week. Meanwhile, Larry Wheels has seen some setbacks lately. After injuring one of his hamstrings, the powerlifter took 21 days of rest. Returning to the gym, Larry sustained a back injury, which resulted in the strongman competitor withdrawing from the 2022 Middle East’s Strongest Man roster.

If his latest shredded physique update is any indication of his potential success, Andrew Jacked is on track for a successful 2022 season. With his first pro show on the horizon, Jacked believes training with powerlifter Larry Wheels will give him a physical and mental edge when it’s time to perform on stage.