Mamdouh ‘Big Ramy’ Elssbiay is highly confident ahead of his title defense: 'I'm Mr. Olympia and I'm working to keep that [title for] many years.' 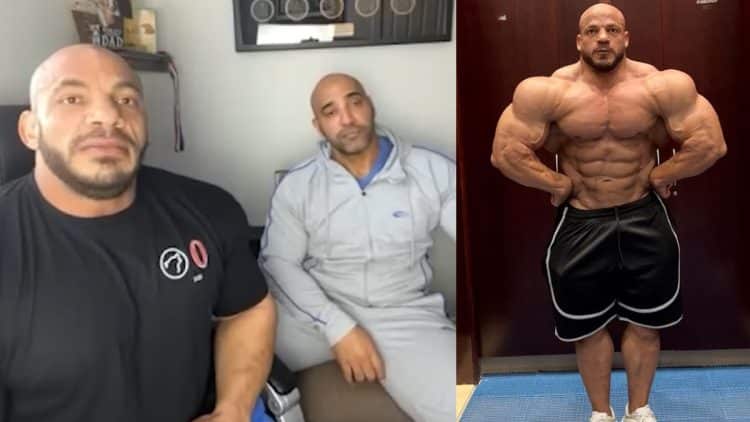 The reigning two-time Mr. Olympia Mamdouh ‘Big Ramy’ Elssbiay is on a mission to secure his third Men’s Open title in just two weeks. During a recent interview, Ramy and coach Dennis James laid out his career goals and walked fans through a day of contest prep.

Questions surrounding Ramy’s commitment to bodybuilding swirled after he couldn’t attend Jim Manion’s 2022 Pittsburgh Pro. He later apologized and mentioned he was unable to fly. The reigning champion didn’t take long to change the public’s opinion though. He took part in a phone call with Olympia President Dan Solomon, who mentioned that Ramy was more motivated than ever to win a third Sandow.

The Egyptian mass monster issued several physique updates throughout the year. He ended the off-season at a colossal 337 pounds. Of course, muscularity and size will only take him so far. To become a three-time Mr. Olympia, Elssbiay identified conditioning as his biggest obstacle. In the past, he hasn’t minced words and said William Bonac, Brandon Curry, or Hadi Choopan could ‘fu**’ him up if he doesn’t bring a superb package.

With just two weeks to go, Ramy decided to finish his preparations in the U.S., led by his coaches Dennis James and Chad Nicholls. James, who promised Big Ramy will be at his ‘best ever,’ continues to push him in training sessions. In their latest interview with Muscular Development, Ramy shared his confidence level for 2022 Olympia and walked fans through a day of prep.

Big Ramy Confident Ahead of Title Defense: ‘After 2021 Olympia At My Worst, Nobody Can Stop Me This Year’

Speaking with Ron Harris, Big Ramy discussed his bodybuilding ambitions. He hopes to retain his title for many years to come.

“After that [2021 Mr. Olympia] I believe nobody can stop me anytime because when I have the [worst] time in my life, I still did that [won].”

According to Dennis James, Ramy’s confidence level is palpable this year. James specified that he’s never seen Ramy motivated like this before a Mr. Olympia competition.

“The day after [2021] Olympia he went to the gym to train,” said James. “Like I said, I’ve known him from 2013 and he was never that confident person — he always looked for something that’s not good or not good enough, so he knows he has to work on [it]. And he’s always been like this.

From the last two Olympias in 2020 and 2021, I’ve never seen him this motivated and so willing to do everything he has to do to get on that stage. He’s doing everything. We trained legs yesterday. I tried to kill him, and I knew his energy level wasn’t the best yesterday because I felt it already before the gym but he pulled through,” says Dennis James.

Unlike years prior, Dennis says Ramy is the first to wake up in the early morning (around 5 a.m.) and wastes no time before starting his cardio training. Dennis believes at this stage of prep, the most important thing a bodybuilder can do is practice posing.

“He’s up first in the morning. He makes the coffee, and he does his cardio. When he does cardio and I hear the machine, that’s my wake-up call. I get up and as soon as he’s done with his cardio, he finishes in an hour. And then we pose before we do anything, we pose. That’s the most important thing right now. We pose, we go through the rounds.”

The reigning champ maintains that posing with Dennis James is the hardest part of his day.

“You know what [you’re getting] posing with Dennis James. That’s the hardest time of the day,” says Big Ramy.

James reiterated how often Ramy practices posing. Dennis stated with confidence that Ramy could go through 10 comparisons without fading on stage. In addition to training/posing, Ramy is eating a meal every two hours, napping, and receiving deep tissue massages regularly.

“We’ll pose two to three times a day. But it’s different. He’s going to be different. They can throw at him 10 comparisons back-to-back-to-back-to-back, he will not fade. Then, he has a meal every two hours. We go to the gym at one. We train, he comes back, every now and then he naps in between.

We now have someone who can do deep tissue who comes here everyday [for Ramy]. At night, we talk with Chad because pictures is pictures and videos is videos. I always tell them, he [Ramy] doesn’t come across in pictures and videos,” says James. “Wait till you see him in person.”

Before wrapping up the discussion, James specified that Ramy’s upper body will now match his signature massive quads.

“He still has his huge quads but now he’s so much bigger on top that it looks symmetrical. That changes his physique. And the way he poses this time… he has a few new poses. They’re not new, but he just hits them differently now, where you’ll see how much beautiful shape he really has when he hits certain shots,” James added.

In November, Ramy came under fire after fans noticed ‘holes’ or dents in his quads. His coach elaborated on the issue in a recent podcast. Dennis said the holes in Ramy’s quads are from little to no blood supply and have nothing to do with injections. While some perceived the dents as an imbalance, James is adamant it won’t affect his client’s placing at 2022 Olympia.

Regardless of how many comparisons he goes through, James believes Ramy is ready for anything. Elssbiay plans to etch his name in the Olympia history books with another victory while derailing new talent and previous contenders.