The reigning Mr. Olympia discussed a number of issues, including his top threats at 2022 Olympia, his diet, training schedule and what he sees as his biggest weakness. 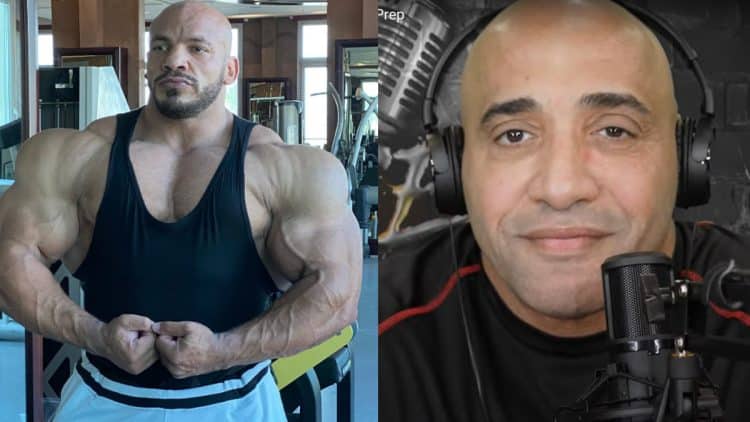 There are less than 14 weeks until 2022 Mr. Olympia and reigning champion Mamdouh ‘Big Ramy’ Elssbiay‘s training intensity is ramping up. In a recent podcast with Dennis James, the defending Men’s Open champion discussed his top threats, training, diet, and his physique’s biggest weakness.

Big Ramy’s 2022 bodybuilding season has been filled with highs and lows. Months ago, he made headlines after failing to appear for a guest posing obligation at Jim Manion’s Pittsburgh Pro show. As a result, he issued an apology, but his actions left many top Men’s Open competitors doubting his commitment to the sport. These concerns snowballed after Ramy announced his plan to retire following one more Olympia contest at 38.

Olympia President Dan Solomon spoke to Ramy on the phone to gauge his passion for bodybuilding. Despite ongoing speculation, Solomon clarified that Ramy is fully committed to the sport and finalizing his strategy to win a third straight Sandow trophy. Thus far, Ramy’s coach, Dennis James, has ensured fans and followers that the reigning champion’s training schedule is going ‘according to plan.’

During his tenure in the sport, Big Ramy hasn’t been known for sharing his physique progress via social media. However, that all seemed to change for this year’s season. The champion has been forthcoming with his improvements and shocked everyone with a 337-pound lean physique update. Many were surprised by his condition given that he’s still far out from competing at Olympia.

In one of his latest physique updates, fans accused Ramy of shooting Synthol or site enhancement oils into his delts/shoulders. A week later, Ramy fired back with another update, showcasing a similar pose, though his shoulders appeared far less inflamed/pointy. Suffice to say, Ramy has already dealt with adversity months out from the biggest show of the year.

With the 2022 Olympia contest quickly approaching, Ramy sat down with his coach Dennis James and bodybuilding veterans Chris Cormier and Milos Sarcev to discuss details about his current season.

While Ramy prefaced the discussion by naming himself as his biggest rival, he clarified that there are three Open contenders that he has his eye on.

After getting a look at Ramy, albeit, by video, Dennis James and Milos Sarcev agree that he almost looks photoshopped.

“Look at Ramy sitting there… it looks like he needs a sports bra. Look at that,” shared Dennis James.

“Look at Ramy right now… doesn’t it look like someone photoshopped or stretched the picture?” asked Milos.

“Yeah, and you know what, people are accusing us of photoshopping and shit. He’s got this pea head. Look at that. Just what you explained Milos, what you saw. This is what I saw, I saw today and a couple of days ago. When we go into the locker room, and he takes his shirt off…” Dennis James shrugs.

Ramy on his Best Lifts: ‘I Want to Have Lifts like Ronnie Coleman’

Ramy hopes to start lifting as heavy as eight-time Mr. Olympia Ronnie Coleman did throughout his career.

“Because [we] don’t have dumbbells like that, but I had the chance one time when I was in the off-season. I had the chance to make a dumbbell press in a gym in New York, I forget the gym. Maybe, I have the shooting. I’m excited to have one like Ronnie [Coleman] when he lifts that one.”

Milos asked Ramy about his best squat. Ramy couldn’t identify an exact number but confirmed he can squat/bench with six or seven plates.

“I’m not thinking I have to get 15 reps in a way. If anything, I bought it, I would lift it but if I have a strong barbell that’s it.

“So, you could do six or seven plates?” asks Milos Sarcev.

“Yeah. I did that. I did that many times. Every day, every week, but with Dennis, he doesn’t like me to train with squats,” Ramy said.

Sarcev encouraged Ramy to grow his legs even though it’s already one of his best body parts.

“Ramy has the genetics to grow everywhere, even more. People want to see,” says Sarcev.

In James’ opinion, Ramy’s main concern should be detail and conditioning.

“You have to go by the judges feedback. If the legs are overpowering… listen, he doesn’t have to squat, and grows. I swear. Heavy leg presses, heavy hack squats — his shit… he reminds me of Dennis Wolf when it comes to that,” says James. “After we finish with leg extensions, which is basically the warm-up, his legs are full-blown.”

Big Ramy: ‘My Weakest Point is My Condition’

According to the reigning two-time Mr. Olympia, he doesn’t have a weak body part — but said conditioning is his Achilles’ heel.

“I think my weakest point — I try all the time to break it, it’s not a muscle. It’s not a muscle to break in. I need to get the condition. I tried every year for that. I’ve lost many times from that. I don’t know. I respect all the coaches I’ve worked with. All of them tried to make [it] a good point.

But my weakness, my weakest point, it’s not a muscle [even] from the beginning. It’s not back, shoulders, arms, like chest, my legs are bigger, only my calves I try every time and they never grow,” Ramy laughs. “I always try to get them conditioned. Maybe I killed myself for the cardio sometimes. I get three hours a day. I slept some time, but I don’t do the stair master.”

Dennis James on Big Ramy’s Diet and Training: ‘He Gained 4 Pounds in One Night’

Ahead of 2022 Mr. Olympia, Big Ramy isn’t taking chances and has hardly cheated on his diet.

“I have to tell you one thing, from Columbia until now. I broke my diet maybe two or three times.” “No, no [I don’t eat junk food]. This year especially, I don’t like to break my diet.” “With Chad [Nicholls] I’m ready for my body — the fat is not too much. Just water and that’s it.”

Ramy says his favorite meal is fish, which is fitting considering he was a fisherman before starting in bodybuilding.

“That’s why I say he’s one in a billion. I seriously believe he has a myostatin deficiency,” says Dennis James. “Just from yesterday to today, he gained a kilo and a half. We’re talking three or four pounds just over night.” “I think he will grow in the next four weeks. That’s why we even started on cable cross overs already. That’s something normally at this time, he wouldn’t even do.

We start always early [this year]. You see us doing drop sets, holds, squeezes – all of it. We only post the sets that are most impressive. If you watch it, you want to be impressed or you want to see some density. But some of the sets we do before, we squeeze and hold, especially for his back. Now, he feels it. He understands. He literally does the exercises, and you can tell it’s working,” says Dennis James while discussing Ramy’s preparations for 2022 Mr. Olympia.

One challenge that Ramy has been tasked with this season is activating certain areas of his back. In a prior episode of James’ podcast, he clarified that the Egyptian native is struggling to tax his trapezius muscle. Though, the elite-level bodybuilder still has plenty of time to shore up that issue in the coming months.

With James in his corner, it’s evident Ramy is pushing the limits as he continues preparations for 2022 Olympia. Judging by the latest admissions from his coach, the reigning champion plans on winning a third title when he storms Las Vegas, Nevada later this year.