Jamal Browner is working hard to become the next person to deadlift half a ton in a competition. 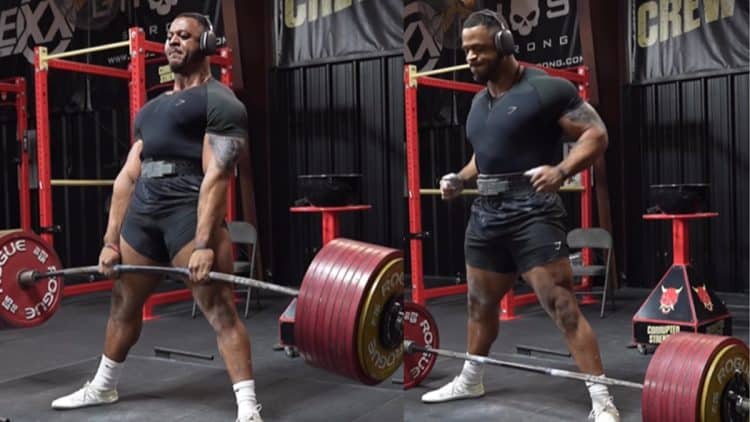 Despite being a highly accomplished athlete for many years, Jamal Browner appears to have made significant progress in his career to become arguably the greatest raw deadlifter in the world today. Browner found what works the best for him, which enabled him to progress further than anyone expected. However, his recent lift is indescribably impressive and is definitely one of the most amazing feats of strength he has ever accomplished. Jamal shared the video to his Instagram account and displayed a 1,003-pound (455-kilogram) deadlift two-rep PR.

Jamal Browner completed the lift with his typical technique, which consists of a relatively narrow sumo stance and a hook grip. Browner also only used a lifting belt, as straps are prohibited in powerlifting. So, his new two-rep PR is raw.

It should be pointed out that Jamal Browner did not struggle for one second throughout the lift. He also made a remark regarding this in the caption of his post, having implied that he could have done more.

Jamal Browner has scored another deadlift PR this week, as he completed four paused reps with 410 kilograms (903.9 pounds). However, that exact weight was his last warm-up in the recent training session where he scored the 1,003-pound (455-kilogram) two-rep PR.

Even some of the strongest guys in the world were impressed by Jamal’s two-rep PR, and they commented on his post. Russel Orhii, powerlifting World champion and record holder, left it simple:

One of the greatest deadlifters in the sport of Strongman, Asko Karu, also admired Jamal Browner’s new achievement.

Another strength freak who specializes in upper body strength, Daniel Ryjov, wrote what many people believe and stated that Jamal is the greatest athlete in history.

It’s not clear if Jamal Browner is going to take part in a competition any time soon or if he plans to take some time to build his strength up even further. So far, he has won ten out of the 16 sanctioned powerlifting competitions and currently holds two All-Time World Records.

*Jamal set all of his PRs at the 2022 USPA Pro Raw Championships.

Jamal Browner deadlifted 500 kilograms (1,102.3 pounds) two months ago, but he did it in training and with lifting straps, so it was unofficial. However, it’s obvious that his grip strength is getting better with each training session, so he might just become the third person, behind Strongmen Eddie Hall and Hafthor Bjornsson, to pull half a ton in a sanctioned event in the near future.