Life and accomplishments of Bill Pearl 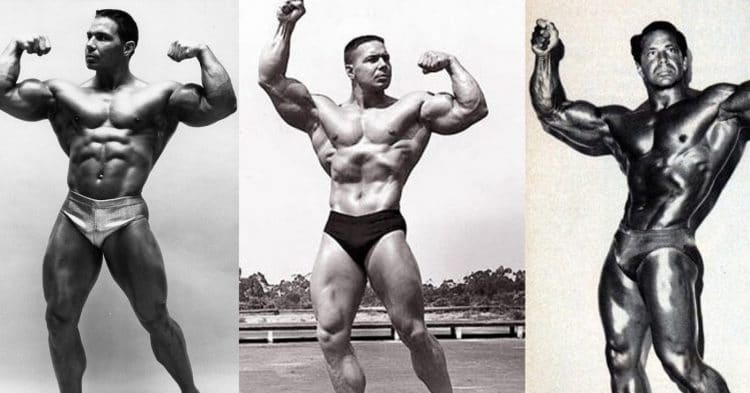 Bill Pearl is a retired former IFBB professional bodybuilder from the United States. He was a five-time Mr. Universe winner and was also named “World’s Best-Built Man of the Century”. He also won many bodybuilding titles during his career. This is his complete profile, biography, training regimen, diet plan, and more.

William Arnold “Bill” Pearl was born in Prineville Oregon in 1930.

His childhood was rough, having moved around with his family during the Great Depression that lasted from 1929-1939. Money was hard to come by but his family eventually settled down in Washington.

Pearl was very intrigued by muscular physiques at a very young age and before his teenage years, and it became an obsession of his to build his body. But after his friend showed him the magazine ‘Strength and Health’ featuring big names such as John Grimek, Clancy Ross and Steve Reeves; he had big aspirations… like to one day be on the cover.

By the time he and his two friends were able to save up and purchase a barbell set, it would take two years for it to arrive because iron was being utilized for more pressing matter during the current war (World War 2).

Before he received his weights, Pearl would use gallon cans of corn and green beans as dumbbells, from his father’s restaurant, and would take on tough jobs that will develop his muscles.

He took inspiration from Eugen Sandow and Louis Cyr; both Strongman legends.

While Pearl was a great athlete in high school; receiving several scholarships to play football and compete in wrestling, he opted to join the navy after graduation, of which he was stationed in San Diego, California. It was there that he joined Leo Stern’s gym, of which he’d develop a strong friendship with Stern. He also trained Clancy Ross, whose physique he’d first seen in the magazine ‘Strength and Health,’ that his friend showed him years earlier.

But it was at Stern’s gym where Pearl would develop his physique and learn as much as he could, taking his development to a champion-caliber level. And by 1952, he had placed third in his first contest; Mr. San Diego. It was at this moment he knew he had a future in the sport and went on to win several other shows. Although he was determined to be the best well before this.

Pearl was done with his service in the Navy by 1954, of which he took $2,800 in war bonds to relocate and open up his own gym in Sacramento, California. There he’d eventually expand to nine fitness clubs and had the opportunity to train a future Mr. Olympia winner Chris Dickerson.

After taking time off from competition to pursue his gym endeavors, Pearl returned and won the 1956 Mr. USA competition.

Bill Pearl had a rather impressive competitive bodybuilding career. He was also a pioneer in many ways; having been the first bodybuilder to pose to music. Not to mention, he was known to do a Eugen Sandow inspired posing routine where he’d dress up in a fake mustache, wearing leotards and a fig leaf, with a late-19th century backdrop to really provide the feel of Sandow’s time.

His most notable and impressive victory came when he defeated three legends in Frank Zane, Sergio Oliva, and Reg Park to win the 1971 N.A.B.B.A., Mr. Universe, Professional. This was also his last competition of which he retired at age 41 weighing 242 lbs/109 kg. He won the Mr. Universe four times and the Amateur Mr. Universe once.

He planned to retire after competing at the 1967 Mr. Universe of which he won. And ironically, this win would get him the attention of Oscar Heidenstam who owned the British equivalent of the magazine ‘Strength and Health,’ which was called ‘Health and Strength’.

But it definitely wouldn’t be the last time he stepped on stage, returning one last time in ’71. Although he sold his LA gym and relocated to Pasadena where he’d open up another fitness club.

But after his return and Mr. Universe victory in 1971, Pearl said the following about his decision to come back.

“My main reason for entering the 1971 Mr. Universe contest was to prove a point and I did. The trophy or the title meant very little to me. I wanted it forgotten and over. I actually felt strange onstage and felt I should have been there as a consular or a judge rather than a competitor. It reminded me of an old man trying to act like a kid. I felt I had my day and enough was enough.”

Pearl was also very interested in Strongman feats which wasn’t surprising seeing as who his inspirations were in Eugen Sandow and Louis Cyr. But he was also very popular and would receive many requests to guest pose at various shows.

He’d do Strongman acts in addition to his posing routines. To entertain the crowd he’d tear license plates and phone books apart, blow up hot water bottles, bend penny spiked nails, break horseshoes in half and he’d lift big weights. In fact, he’d bench press up to 450lbs (205kg) press 310lbs (140kg) from behind his head, military press 320lbs (145kg), squatting 605lbs (275kg), and even front squat 500lbs (225kg). He was incredibly strong for his time and received plenty of well-deserved recognition for his amazing feats.

It was after his success in this time that he’d make enough money to close his fitness club in Sacramento and open a gym up in Los Angeles, California where he’d focus on training others.

Pearl had an incredible physique due to both his genetics and hard work in the gym. Below we’ve provided a few of his workout routines from back in the day.

“Make one point clear, it’s an all-important detail to me. Regardless of my desire to gain weight, I always endeavor to train regularly, and very hard.”

He’d do a full-body workout routine for developing power on Monday, Wednesday, and Fri, then he’d rest the other four days out of the week.

Before the working sets, he’d 1-2 warmup sets and then would use 75-90% of his one-rep max for each lift. He rests 2-3+ minutes between sets. Pearl didn’t train to failure with this routine; he’d stop when the reps began to slow down.

The following split was the legend’s best workout routine for all-around muscular development.

He’d do chest, shoulders, triceps, and abs on Monday, Wednesday, and Friday, and back, biceps, and legs on Tuesday, Thursday, and Saturday.

He’d choose a weight that would allow home to stop a few reps short of failure and would rest 1-2 minutes between sets. If he could perform more than 5 sets of 6 or 8 and 10 reps, he’d increase the weight by 5-10% to continue progressing.

“Everything you do in the gym has to be done on a positive note. You must condition your subconscious mind to think that you are getting bigger and training with more intensity, and your body will have to respond accordingly.”

In his earlier years of competing, Pearl would eat five meals per day and he’d drink lots of milk (4-5 quarts per day). He’d also eat lots of meat, baked potatoes, and vegetables, and would either bake or broil his food because it was easier for him to digest.

But at 39 years old, Pearl became a vegetarian, or lacto-ovo vegetarian (can eat eggs and dairy but no fish) after learning his health was declining following a blood test. His blood pressure, uric acid, and triglycerides were at unhealthy levels and he knew that he’d have to cut down on his meat consumption.

Pearl was a big proponent of maintaining a small waist in comparison to the size of his muscles, which is what classic bodybuilding is all about.

“It is not sensible to increase your chest three inches and have your waist increase along with it. My aim is to always add good firm muscular size and with hard training, good food, and plenty of protein.”

Bill Pearl was known as the first bodybuilder to produce training booklets and guides. He has written several books including Getting Stronger: Weight Training for Men and Women, that has sold more than 350,000 copies.

He has deservingly received various awards and accolades, as well as having entered the Hall of Fame of several organizations.

He currently resides in Phoenix, Oregon with his wife.

Bill Pearl is and forever will be a legend in the sport of bodybuilding. He had one of the most impressive physiques to ever step on stage and was well-deserving of the “World’s Best-Built Man of the Century” accolade. After having a rough childhood; living through the Great Depression, it’s safe to say he did amazingly well for himself. Pearl is the ultimate example of how hard work, determination, desire, and visualization can help one to achieve what would seem impossible to many.