"The Boogieman" goes through an intense pull day workout as the 2022 Olympia prep continues. 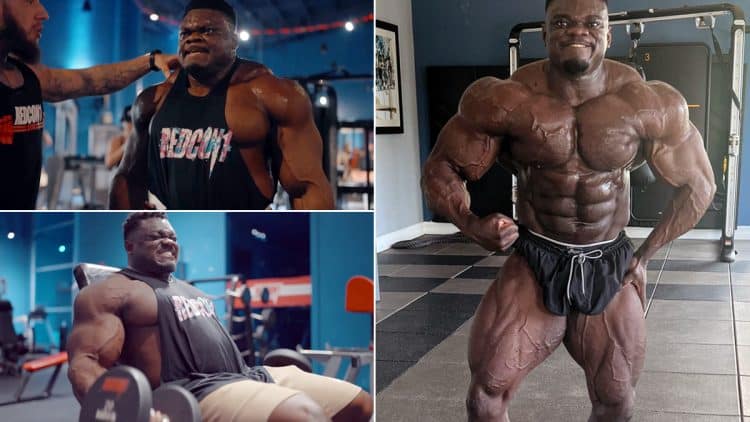 Bodybuilder Blessing Awodibu is an Irish professional bodybuilder and a social media star. He competes in the Open division of the IFBB Pro league. Before he became a serious contender in the Open division, Awodibu was a social media star. At the time of this article’s publication, he has close to two million Instagram followers. The Boogieman turned to bodybuilding after his dream to get into the college of his choice was shattered. He then competed at numerous shows, eventually earning his IFBB Pro card in 2017.

However, the 30-year-old made his professional bodybuilding debut much later at the 2021 Indy Pro and placed third in the Open division. He returned at the 2021 New York Pro, where he developed a fierce rivalry with fellow prospect Nick Walker. Awodibu finished sixth at the show and decided to take an extended break from competition to improve his physique. The Irishman eventually made a comeback with two stunning victories at the 2022 Indy Pro and the 2022 New York Pro. With these wins, Awodibu secured his invitation to compete at the 2022 Olympia, scheduled for Dec. 15-18 in Las Vegas, NV.

The Boogieman is training with dogged determination to bring his best version at his Olympia debut. 14 weeks out of Olympia, he went through a back and biceps or a pull day workout at the Redcon-1 gym. The video of this session was uploaded on Awodibu’s YouTube channel.

Blessing Awodibu’s Back and Biceps Workout

Awodibu started the back training session by targeting the upper trapezius (traps) muscles with shrugs. While traps are the primary muscles activated with shrugs, they also recruit the rhomboids and forearms.

“We’re still focusing on that upper part of the back. We just finished traps, and now we’re going to isolate rear delts for one exercise,” Awodibu said.

After a couple of trapezius exercises, the 30-year-old took to the rowing machine and worked the posterior (rear) deltoids. Awodibu lowered the seat all the way down so that his arms were moving at a higher level, and his focus remained on the rear delts. He got a few good sets of this exercise and shifted his focus to working the back.

Seated rows are an excellent compound movement to increase upper body strength and improve posture. This movement works the lats along with the trapezius, rhomboids, and biceps.

Awodibu performed this exercise on a FreeMotion Dual Cable Cross machine with its arms set at the lowest setting and used D-handle bars to target his lower lats.

Awodibu next took to the barbell row and started with a single plate in the first set. He worked his way up in weight and performed the top set with four and a half plates on either side and wrapped up the exercise after a back-off set with a single plate.

The barbell row is a compound movement that targets multiple muscles, including the back and arms. Depending upon the intensity, variation, and volume, barbell rows can have excellent carryover strength benefits for other lifts. As a result, they can very well be perceived as one of the best lifts for the back besides deadlifts.

While vertical pulls like the lat pull-down and pull-ups are amazing for building back width, the horizontal rows impart thickness to the back. The T-bar row is amongst the most effective of all the rowing exercises available. It is a compound movement that engages the entire posterior chain.

While many perceive it to be a lat-specific exercise, T-bar rows also engage the arms, deltoids, rhomboids, lower back, and core. The Boogieman performed a few sets of this exercise and jumped to the last movement of his back workout.

Seated Row on a Plate-loaded Machine

Awodibu shared a valuable tip for building back strength after wrapping up the back session and said:

“I would advise you guys to always use your straps, especially on back days. Because when you’re using the straps—the goal is you want to eliminate your grip and your forearm. You want to use your full back for any exercise that you’re doing. If you’re not wearing straps and you’re too focused on your grip, or too worried… You’re gonna be using 50 percent back and 50 percent forearms…” Awodibu said.

The 30-year-old subsequently performed a biceps workout that included variations of biceps curls. Blessing first took to the EZ bar curl. The EZ bar puts less pressure on the wrists and forearms and is more effective at working the brachialis and brachioradialis muscles than the straight bar. Awodibu performed a few sets of this exercise and took to the dumbbell incline curl. He wrapped up the biceps workout and eventually the training session after a few sets on the Icarian selectorized bicep curl machine.

In the video, The Boogieman shared details about his prep for his Olympia debut. Awodibu revealed that his caloric intake is still very high, and he is doing about 20 minutes of cardio every day. He will slowly increase the cardio to 60 minutes and pull the plug on it six weeks out of the Olympia.

“I get in shape pretty quick. The goal for me is to maintain this fullness, this roundness. And that’s what I did in the last prep – to maintain the mass and make sure that we’re not gonna be losing any muscle mass…”

Blessing Awodibu is confident that his best physique is the most dangerous for his opponents. Legs are admittedly the weakest part of his physique. It is also one of the factors that cost him in his first two Pro shows. However, the 30-year-old has proved that he has the tenacity and determination to go back to the drawing board and fix all his flaws. His involvement in the 2022 Olympia is certainly an intriguing affair.

Nick Walker has his eyes set on the 2023 Arnold Classic, taking place from March 2-5 in Columbus, OH. Walker shot to fame...