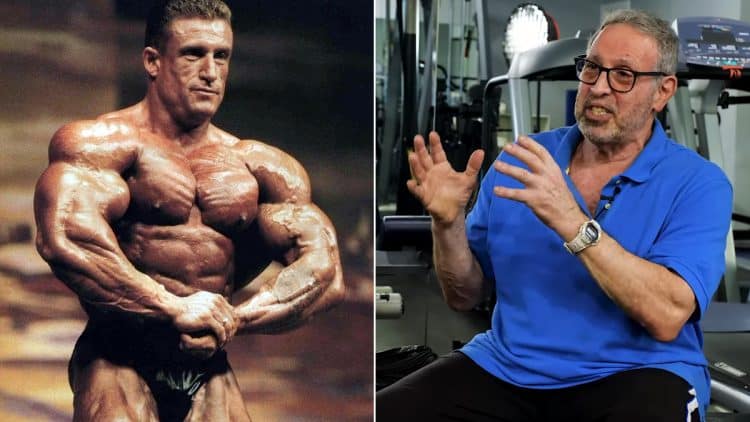 Bodybuilding aficionado and Muscle & Fitness and Flex Magazine editor/writer Jerry Brainum has accrued a wealth of knowledge while covering the sport. In a recent YouTube video, Brainum tackled bodybuilding drug myths, rampant steroid use in sports, and Dorian Yates taking the ‘dangerous’ compound Anavar 50 during his career.

The sport of bodybuilding for most athletes is a balancing act. It demands a combination of training, strict dieting, supplementation, and drug protocols. In today’s landscape, especially in the Men’s Open division, athletes have continued to find new and inventive ways to build muscle mass and add size.

In the 1990s, six-time Olympia winner Dorian Yates ushered in a new era with his massive physique. Up-and-coming talent followed in his footsteps as some of the most notorious mass monsters emerged in the 2000s, like four-time Mr. Olympia Jay Cutler and “The King” Ronnie Coleman.

Achieving an Olympia-caliber physique is no easy feat and athletes have paid the price in the past. In one of the latest Escape Your Limits podcasts, guru Brainum discussed the hidden truth behind steroids, common myths, and one of Yates’ more dangerous bodybuilding compounds.

Jerry Brainum: “Contrary to Popular Belief, Steroid Use Is Universal In Sports”

During the video, Brainum opened the discussion by sharing that competitors cannot succeed in sports, including bodybuilding, without PEDs or steroids.

“If you’re a high level elite athlete whether it’s sports or bodybuilding and you want to compete at a high level. It’s [performance-enhancing drugs] absolutely necessary. There’s no other way. Years ago, let’s take bodybuilding for instance, I was just talking about this yesterday,” Jerry Brainum said.

Over the past few years, athletes continue to seek bigger physiques. The current Men’s Open two-time Mr. Olympia champion Mamdouh ‘Big Ramy’ Elssbiay pushed the scales at almost 340 pounds at the end of the off-season. For Brainum, he says steroid use isn’t just rampant in bodybuilding, but present in all professional sports.

“Unfortunately, the way bodybuilding has transmogrified in the past couple of years — we have these 300-pound monsters on the stage. It’s just impossible [not to use steroids].

Now that’s just bodybuilding, but other sports, I can tell you: contrary to popular belief, steroid use is unversal in sports. Even chess players, don’t ask me why, even chess players take steroids.”

Brainum Dispells Myth About Injectable Steroids Being Safe: ‘Everything Winds Up in The Liver’

According to Brainum, injectable steroids are harmful despite those who believe they bypass the liver.

“There are certain drugs that are far more dangerous than others. For example, right off the top, oral anabolic steroids, all of them. Even the ones that are considered safe like Anavar and Winstrol — two trade names, it depends on any drug, it depends on time and dosage, any pharmacologist will tell you.

“A great myth among athletes and bodybuilders is that injectables are safe because they bypass the liver. Not so. What they have to realize is everything winds up in the liver.” “Initially, if you take a testosterone or anabolic steroid, an androlone, it will bypass the liver but it eventually has to be degraded in the liver.”

During his career, Yates used Anadrol 50 and remembers adding a significant amount of muscle mass. However, Brainum suggests that the compound is liver toxic despite its powerful nature.

“Dorian [Yates] used a drug called Anadrol 50. He’s mentioned this publicly so I’m not betraying anything. I’ve seen him talk about it a couple of times. He talked about how it gave him tremendous size and shape. It does. It’s a very powerful drug Anadrol 50 it’s called. Oxymetholone I believe is the generic name, but it’s also extremely hard on the liver.”

He added that if someone takes Anadrol 50 for more than six weeks, harmful side effects could come as a result.

“If you take it more than let’s say more than six weeks, you’re going to start to break down your hepatocytes, your liver cells. That can lead to scarring, cirrhosis, liver damage, liver cancer, blood cysts in the liver, a horrible thing to have, that’s an example.”

When discussing SARMS (Selective androgen receptor modulators), Jerry said to steer clear of these compounds because they cut off natural testosterone production.

Despite his success, Yates believes many bodybuilders nowadays are ‘ticking time bombs.’ This sentiment was also shared by bodybuilding legend Arnold Schwarzenegger recently, who suggested that Open bodybuilding is the most dangerous sport in the world.

In Jerry Brainum’s opinion, athletes from all sports are using performance-enhancing drugs, not just bodybuilders. While some athletes were able to get away with being drug-free years ago, Brainum now believes that’s impossible to do in sports today.

You can watch the full  video here, courtesy of Escape Fitness YouTube channel:

RELATED: Samir Bannout on Kamal Elgargni and Steroids for Older Bodybuilders: ‘You Don’t Want to Push It at That Age’