Some of Classic Physique's best bodybuilders are closing in on their 2022 Mr. Olympia preparations. 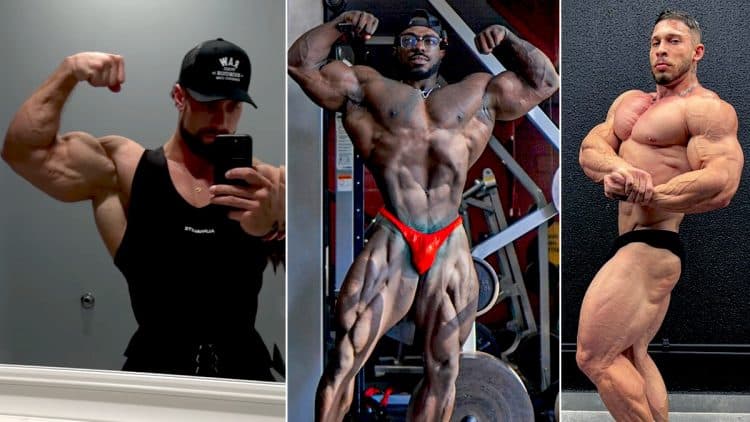 The Classic Physique lineup expected to compete at 2022 Mr. Olympia has arguably never been stronger. In a series of physique updates, Chris Bumstead, Terrence Ruffin, and Ramon Rocha Queiroz shared their latest progress photos via Instagram.

In 2019, the Classic Physique title changed hands when Bumstead took it from Breon Ansley. The following year, Bumstead proved himself again on the Olympia stage and walked away as the 2020 champion. Last year, Bumstead succeeded in picking up his third title.

“Ruff Diesel” pushed Bumstead on stage with back-to-back runner-up performances in 2020 and 2021 at Olympia. Throughout the season, Ruffin has been open about his diet and workout regimen. He even trained with a fellow competitor and rising star Urs Kalecinski recently. Earlier this year, Ruffin became a two-time Arnold Classic winner when he defeated second-place finisher Ramon Rocha Queiroz.

Queiroz, who finished fifth at last year’s Olympia, is gaining momentum as a Classic Physique competitor. His size and fullness could present challenges for the current champion. Queiroz promised Bumstead a big ‘surprise’ when they square off in their second encounter. With just a few weeks until the sport’s most celebrated event, Bumstead, Ruffin, and Queiroz are showing off their physiques in the heat of contest prep.

Two weeks from Olympia, Bumstead shared a brief albeit impressive clip of his arms.

Unlike previous seasons, Bumstead and Iain Valliere won’t be training together. To fill the void of not having a coach, Bumstead teamed up with Hany Rambod.

A number of training videos have surfaced since they started working together. One of the most recent training sessions saw Bumstead and Open competitor Hadi Choopan annihilate their quads with a heavy workout. Bumstead also joined Hany and Hadi for a brutal back workout.

In a recent post on Instagram, Ruffin gave fans a sneak peek of his conditioning a few weeks from taking to the stage.

In addition to an intense training regimen, Ruffin is recognized for his artistic posing abilities. He took part in an extensive dialogue with bodybuilding veteran Lee Labrada. Labrada shared his concern with Ruffin that symmetry, balance, and proportions are being ‘tossed to the side’ in Open bodybuilding today.

Courtesy of Chris Aceto’s Instagram, Ramon Rocha Queiroz gave an update on his overall conditioning from the front.

This isn’t the first time that Queiroz and Bumstead have issued physique updates around the same time. At the seven-week mark prior to this year’s contest, they both highlighted their progress. Given the star power of Queiroz and Bumstead, fans hope to see them go through several comparisons before the show is over.

The Classic Physique division is by far one of the more prevalent bodybuilding categories today. Months ago, the division was featured last at the 2022 Boston Pro. The show was won by Urs Kalecinski who will also challenge for this year’s Classic Physique Olympia crown. Since then, many in the sport have suggested that Classic Physique’s popularity may one day overshadow the Men’s Open.

There are well over 60 Classic Physique bodybuilders slated to compete next month at 2022 Olympia. Ruffin and Queiroz plan on bringing their best to stop Bumstead from securing his fourth-straight title.