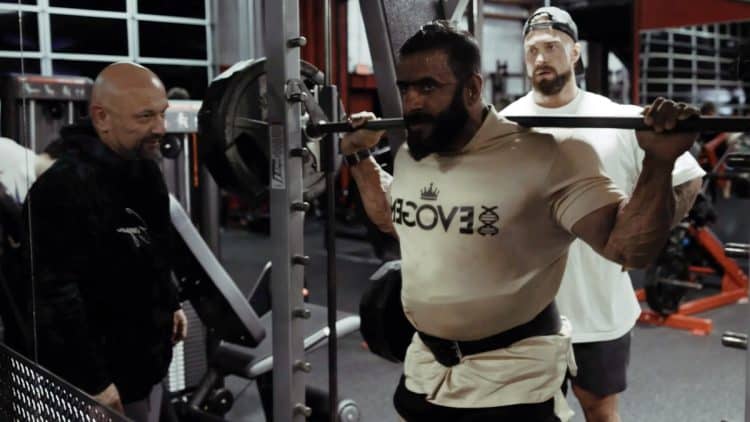 Chris Bumstead recently trained with Hadi Choopan to be stronger and ‘not be a skinny b**ch’. Bumstead is one of the most successful competitors in the Classic Physique division of the IFBB Pro League. The Canadian phenom won the Classic Physique Olympia title by dethroning former champion Breon Ansley at the 2019 Olympia. He then went on to defend it at the 2020 and 2021 Olympia. CBum has dealt with a number of challenging situations in his preparation for the 2022 Olympia, and he is one of the favorites heading into the competition. Iain Valliere, an open-division bodybuilder, and close friend has been coaching Bumstead so far. However, the duo announced the end of their ‘coach-client relationship’ a few weeks back. Although difficult, both men understood it was a wise decision for Valliere’s career.

Bumstead is now training under famed bodybuilding coach Hany Rambod and recently partnered with Hadi Choopan, who is also training under Rambod. Choopan is a top contender in the Men’s Open division. He last competed at the 2021 Olympia and finished third behind champion Mamdouh ‘Big Ramy’ Elssbiay and runner-up Brandon Curry. ‘The Persian Wolf’ has managed to pull off excellent performances in spite of travel restrictions and language barriers. Choopan arrived in the USA seven weeks out of the 2022 Olympia to train with Rambod. He will attempt to dethrone the reigning champ and stake claim at the Mr. Olympia title in 2022.

Chris Bumstead and Hadi Choopan went through the legs workout in Southlake, Texas on November 19th under Hany Rambod’s guidance. The video of this session was posted on Bumstead’s personal YouTube channel. Let’s check out how the duo nailed leg day.

CBum and Choopan started the workout with leg extensions to isolate the quads and warm up the knee joints. While it is one of the most common quad isolation movements, leg extension can be harsh on the knees if not done properly. It is advisable to avoid locking out the knees completely during this movement. The duo got a few sets of this exercise under the belt and took to the first heavy compound movement of the day.

The quad-focused workout continued with Smith Machine squats. Weights on the Smith machine move along a fixed trajectory and this reduces the need to control the weights significantly. Coach Rambod instructed Hadi to do the front squats while CBum did the back squats.

“Because I want you to work on your hips a little bit and we’re going to do back squats… Because that’s going to be easier for you and that’s how your biomechanics are dialed in,” Rambod told Bumstead.

The duo performed all the sets under Coach’s watchful eye with slow and controlled movement and jumped into the next one.

CBum and his Persian friend worked the quads further on the hack squats machine. Hack squats are a compound movement that works all the major muscles in the lower body. However, quadriceps are the primary focus while hamstrings and glutes take up a more supporting role. After doing a few warm-up sets, they increased the load on the machine and cranked out heavy working sets of hack squats to fire up the quads.

“This is the point in my prep where I’m still moving heavy weights but I’m trying not to kill myself. Hany is really trying to stress not to kill myself here. It’s trying to control the reps and not go super heavy. I’m going like a plate or two lighter than I normally would…” Bumstead said.

While speaking about how training with Hadi Choopan feels, CBum said:

“I trained my whole life with Iain (Valliere). So I always train like an Open bodybuilder. I’m training for the Open as always. But training with Hadi reminds of training with Iain who’s stronger than me. So they’re actually doing the same weight on front squat as I do on the back squat. So it really pushed me to actually be stronger and not just be a skinny b**ch!”

Coach Rambod then took his pupils to the leg press machine and instructed to perform a few heavy sets to stimulate the quads. Hany explained the mechanics of the machine used here and said:

CBum and Choopan worked their quads with the walking lunges. Being the bigger and stronger of the two, Choopan did lunges with barbell while Bumstead did lunges with dumbbells. After doing a few sets of this exercise, the duo did some hamstrings, quads, and adductor muscles work.

The Persian Wolf and Bumstead took to the seated leg curls to work the hamstrings next. Seated leg curls offer a better range of motion and are thus more effective for inducing hypertrophy compared to lying leg curls. The duo did a few sets of this movement and took to another movement.

Choopan and Bumstead sprinkled a little bit of calf work in the mix and did the standing calf raises. This exercise works the gastrocnemius muscle in the calves. After performing some quick sets, the duo took to the final exercise of the day.

The adductor muscles are a group of muscles that adduct (bring together) the thighs. Some of the adductor muscles also extend or flex the hips and stabilize the pelvis and trunk while standing on one leg. The duo did a few sets of this movement and wrapped up the training session.

Chris Bumstead and Hadi Choopan have a similar goal at the 2022 Olympia but their path to victory and the stakes are completely different. CBum will attempt to create history by winning the fourth consecutive Mr. Olympia Classic Physique title. He has to defeat formidable opponents like Terrence Ruffin, Urs Kalecinski, and Ramon Rocha Queiroz to achieve this. However, Bumstead is looking absolutely jacked in his recent physique updates and experts believe he will be the biggest guy in the division at the 2022 Olympia.

On the other hand, Choopan has to beat veteran bodybuilders and hungry up-and-comers to wear the 2022 Olympia crown. Irrespective of how the results turn out, it is going to be fierce competition to reach the top spot.