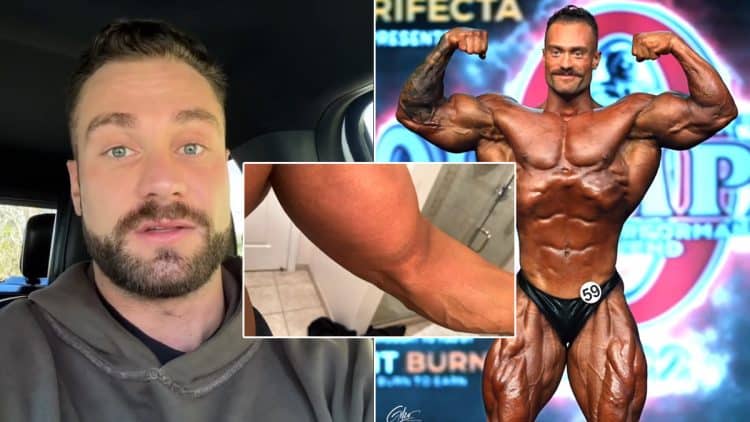 Canadian bodybuilder Chris Bumstead is one of the most popular Classic Physique competitors of all time. In a recent video posted on Instagram, Bumstead opened up about competing at the 2022 Mr. Olympia with a torn bicep.

Chris Bumstead started competing in 2016 and quickly established himself as one of the most hyped talents ever in the Classic Physique division. He turned in a stellar season in 2017 that saw him score back-to-back victories at the 2017 Pittsburgh Pro and 2017 Toronto Pro Supershow. He wrapped up the year with a runner-up finish in his Olympia debut.

Bumstead continued to go up against a slew of new talents, such as Classic Physique standout Terrence Ruffin and extended his dominant run each year since first winning the Olympia competition.

In 2022, Bumstead put an end the ‘coach-client’ relationship with his longtime mentor and Open competitor Iain Valliere. Given their separation, some were doubtful of the success he would have on the Olympia stage.

When all was said and done, ‘CBum’ reigned supreme once again as the winner of the 2022 Mr. Olympia Classic Physique. While he came in fantastic shape, there was some criticism regarding his bicep development when compared to other top contenders like Ramon Rocha Queiroz.

Chris Bumstead won the 2022 Mr. Olympia with a torn bicep

In a recent Instagram post, Chris Bumstead revealed that he entered the 2022 Mr. Olympia contest with a torn bicep and explained the mental challenges he overcame to become a four-time Olympia winner.

“It was time I address the elephant in the room; my torn bicep. My beautifully mildly slightly not very kind of torn bicep. I tore my bicep. I don’t know how it happened. Everyone’s always like, ‘did you feel it? Did it pop? What did you do?’ I don’t know how it happened. Sometimes, that’s happened to me before with my other bicep I think when I was younger. To go back to the beginning, on Wednesday I first noticed a little bit of pain. That was the day of my weigh-ins, three days out the Olympia. I was kind of pulling water, pulling weight trying to make weight that night at 8 pm. So, I’m super depleted and lean, obviously, your body is more susceptible to injury and I felt some pain. The next day, I felt a little bit more pain when I was posing. I tried not to push it. Friday, it hurt a good amount so I tried not to pose too much. Normally, I would like to pose especially when I’m carb loading but it just hurt so I was kind of holding back.

“Then that night it was a little bit swollen. I was like, ‘f**k, just try not to think about this right now.’ I went to bed, woke up the next day, and it was a little bit more swollen. Obviously, not that bad swollen as in the picture from the pre-judging. But, it got in my head and it stressed me out and I want to kind of talk about the mental side that I battled through. That was prejudging, get tan, try not to think about it. Then, looking at myself, I could just see it and I could just feel it and it was just kind of in my head. So we went on stage for prejudging and I still felt really good and I still felt confident. My physique was great but I kept just thinking that here is this great physique I’ve built, probably the greatest package I ever brought to the stage but my arm. Everybody is going to be seeing me and go like, ‘why does his arm not look right?’ I just couldn’t get that out of my head. It was something that was pulling me out of the moment.”

‘CBum’ discussed living in the present moment and dialing in his mindset throughout Olympia weekend a few weeks ago.

“I’m someone who was super shy, quiet and hated crowds and got anxious being in front of people let alone speaking or posing when I was younger. But I’ve built the skill of being present and really enjoy the moment on the stages of the Olympia. That’s why I love it so much because you can just turn off the world and be on stage under the lights. There is a feeling of absolute presence that I can’t even explain. This kinda took away from that. I was being hard on myself. I also put a lot of expectations and pressure on myself this year having such a good prep and brought my best package to the Olympia. I really wanted to just come in and crush this. With all this pressure and sh*t going on in my head with the torn bicep using my brain’s focus on where I did not want to focus on and not being as confident and present as I like. I get on stage, pose, do everything I need to do and then I get off and I wasn’t in it fully.

“I remember Hany came up to me like, ‘what the f**k are you doing?’ I was like, ‘What? What do you mean?’ He’s like, ‘smile up there man. You look crazy, great, crushing it, just be up there and smile. Enjoy it. This is what you worked for. I was like, ‘f**k you’re so right.’ I washed the sh*t out of my brain; getting in the first callout. I had time to process these things backstage. I went back on stage for the rest of prejudging and was able to be a lot more present and enjoy that.”

Chris Bumstead showed pictures of his swelled arm. He opened up about a personal moment that helped put things into perspective for him.

“Then from that posing and resting a bit throughout the day, my arm got worse, it got more swollen and you can see it in the night show, especially in my routine that it was more swollen at night. It got in my head again and I was stressing about it. I had a headache and the adrenaline dump from the morning, all this stuff going on. It wasn’t where I like being before getting on stage at night. Hany came and gave me another pep talk just putting my head where it needed to be and get laser-focused.”

“Then, I had one of my ‘CBum’ moments in the bathroom crying. I got on my knees in front of this mirror and I looked at myself. I was just like, ‘What’s going on man? All this work you’ve put in, all the effort you’ve put into this, all the love you have for this, the years and many times you’ve done this and you’re stressing about it now? All the fans and friends who’ve supported you, who are excited to be here. You should be excited for that. Not even you should but that you get the opportunity to be here and enjoy this. This is a privilege and a blessing to be here. I’m going to choose to enjoy this.’

“I feel like every year, I’ve had something kind of come up, just some external stress that hit me during prep that I had to battle and keep my mind to get through prep on stage. Then everything comes together for the Olympia and I really enjoy it. This year, everything was really good in my prep and the morning of the show my bicep is swollen. This is my new challenge I had to learn to overcome. It’s another reason why I love bodybuilding. These immediate challenges that we all have the power to overcome.”

“I was able to pull my sh** together. I went out there, did my routine, winged that, I changed the song two days earlier but I was present. We went out there, had fun, crushed it and it was just a proud moment of myself. It’s also why you see that clip of me getting off stage and just balling my eyes out. Because it was all the pressure, expectation, stress, getting on stage, been on my mind all day, battle it, all of the ups and downs all day then I was able to pull it together, be there and enjoy it and bring home the win.”

‘CBum’ shared that he did not pick up a severe injury and expects to recover in under two months.

“My bicep now update. It’s only mildly torn, it’s not off the insertion, just in the muscle belly so it’s really not that bad. They said six to eight weeks to recover. I’m stubborn so I’m going to say five to six weeks on that one. But I haven’t trained back or biceps. I really haven’t trained at all in four weeks. I’m just letting it heal, letting it recover, keeping down inflammation.”

Chris Bumstead stands as the winningest Classic Physique competitor in the history of Olympia contests with four trophies under his belt. He has no plans to slow down anytime soon and declared his goal of winning another Olympia show.