‘CBum’ gave his take on winning the 2022 Mr. Olympia and opened up on a potential move to the Open 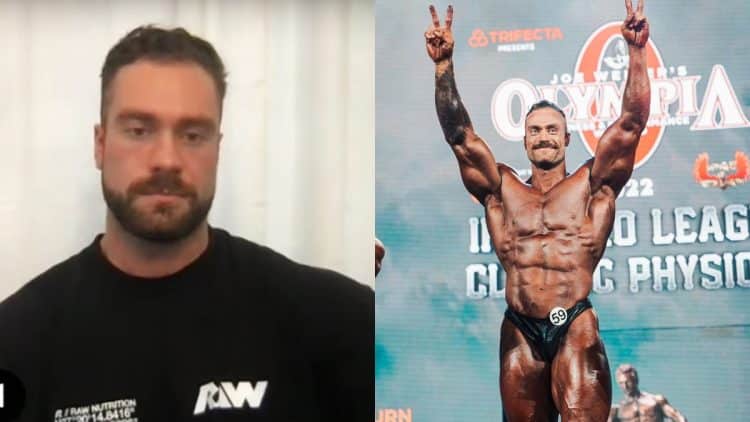 Canadian bodybuilder Chris Bumstead has established himself as the most successful Classic Physique athlete in Olympia history. In a recent interview with OlympiaTV, Bumstead shared his breakdown of the 2022 Mr. Olympia after securing his fourth title.

Reigning four-time Mr. Olympia Classic Physique champion Chris Bumstead rose to popularity in 2017 as a division standout. He dominated the competition at the Pittsburgh Pro contest before securing another win at the Toronto Pro Supershow, which earned him entry to the most prestigious fitness showcase in the world. The Olympia debut went well for him, and he placed second. Bumstead returned to the Olympia stages in 2018 and retained the runner-up finish behind two-time victor Breon Ansley.

2019 would be the year when ‘CBum’ finally won his first Sandow trophy by dethroning Ansley. He proved to be a commanding champion as he warded off the next generation of Classic Physique competitors and held on to the title each year since first winning it.

During the build-up to Joe Weider’s 58th Olympia Fitness & Performance weekend, ‘CBum’ revealed that he would no longer work with his longtime coach and Men’s Open competitor Iain Valliere as the latter wanted to focus more on his own bodybuilding career. Bumstead teamed up with renowned bodybuilding guru Hany Rambod just eight weeks out of the show.

Coach Rambod recently shared his experience of working with Bumstead. He disclosed that getting to know Bumstead on a personal level was the biggest hurdle he faced. Considering the many achievements of Bumstead, Rambod did not try to start from scratch and focused on building up the foundation Valliere had built.

Eventually, Chris Bumstead was declared the winner of the 2022 Mr. Olympia Classic Physique competition. He brought a stunning package to the show and handily got the victory over the likes of Brazilian bodybuilder Ramon Rocha Queiroz and German sensation Urs Kalecinski.

In a recent interview with OlympiaTV, Chris Bumstead shared his analysis of his performance after winning the 2022 Mr. Olympia Classic Physique division.

When asked if it was the most dominant win of his career, Bumstead gave his take by comparing it to 2020.

“I think this is the best package I brought for sure progressing slowly over the years. 2020 I mentally felt like it was the most dominating but that’s also because 2019 to 2020 is when I made the biggest jump to my physique. That’s when I felt the most dominating. This year, I’m so focused on myself I always think it’s tight and I push myself hard so I don’t really feel like I’m dominating because I don’t want to give myself any excuse to let off the gas.”

He explained why he prefers to lean back further to balance out the shape of his back muscles.

“I have everybody watch how far I lean back and they tell me not to. A lot of my career I kept leaning forward. A lot of bodybuilders lean too far back. It’s a habit, people tell other people posing not too lean too far back. But I found my physique at least. It brings out my lower lats and as the taller guy, it adds depth and shrinks the length of my back because I’m so tall so it helps.”

Following the win, Chris Bumstead revealed that he competed with a torn bicep. He further elaborated on how he managed the injury while staying in the right head space for competition.

“It comes with experience and time being on the Olympia stage is something I’ve gotten used to and worked on. I used to be nervous and show those nerves on stage having no injuries. Now I’ve done it for enough years that I can have an injury and push it off, kinda do what I need to do.

“I was backstage telling myself, ‘you just got out there, you still look good, gather yourself, get your head together.’ Hany came backstage and gave me a wake-up call so when we went back for comparisons, confidence was full and I was present.”

“It wasn’t a serious tear. I’m beyond lucky that it wasn’t a serious tear and that it didn’t happen a day earlier. It didn’t get too swollen until the Sunday after the show. I got an MRI done on Monday. It’s only a muscle belly tear. It hasn’t retracted at all, no shrinkage or anything in the bicep. I don’t need surgery, just time to heal.”

“Luckily, you can’t actually see the inflammation or tear on the outside of my arm. It was on the inside portion of my bicep so from the outside you can’t even tell.”

‘CBum’ shared the experience of working with coach Hany Rambod for the first time.

“The peak week was definitely a lot more intensive. Hany is very meticulous with everything; everything that went in my body to everything that came out. What time I went to the bathroom, just everything was calculated and meticulous. We only started working together 16 weeks out so there wasn’t a lot of learning my body. So the prep was relatively the same, consistent. He spoke with Iain about following a similar game plan. He was super on it.”

Chris talked about the future of the Classic Physique category at the Olympia and backed Ramon Dino and Urs Kalecinski to battle it out for the top prize after his departure.

“In my opinion, Ramon and Urs are just going to be back and forth in the years to come. Urs is a little younger and I think he’s just finding his path as a bodybuilder and understanding how much of a full time job it is. When he does that, he’ll catch up to Ramon and they’ll battle it out.”

Bumstead is down to try the Open class for fun

While he has no title ambitions in the Open category, Chris Bumstead expressed his willingness to step on the stage next to the mass monsters of the Open class for fun.

“I will never push my body to chase Mr. Olympia in the Open. I might step on stage for fun at the Open. It won’t be at the Olympia it will be after the Olympia. I’ll try it maybe one day.”

“I’ve always been so clean, little, subtle, just to make sure I’m tight because that’s the look for Classic. But for me to come in full that would be fun for myself. The Arnold was three or four weeks after the Olympia, I would do that.”

Bumstead extended his support for Derek Lunsford as a potential future champion.

“Who I’m looking most forward to seeing coming in perfect and growing, it’s Derek Lunsford. He really impressed me this year on stage with his extra weight and seeing him in the Open for a few more years and perfecting that look is going to be absolutely insane. He was one of my favorites on stage.”

As a multi-time champion himself, Bumstead gave his take on the achievements of bodybuilding legends Lee Haney, Ronnie Coleman, and Phil Heath. He revealed that he was not targeting to win as many trophies as them.

“I have a much greater appreciation for what it takes mentally to do that seven times or eight times [like Phil Heath or Ronnie Coleman]. It’s insane. There’s a lot more pressure coming in. It becomes more of a mental game than anything. Same physical process we do but the mental side of it is just different. Being able to mitigate that and focus on what you need to when all eyes are on you and all pressure is on you.

It’s definitely a lot. I’ve gotten a lot better at mitigating that pressure… I don’t think I’m going for eight or nine or 10 for sure. But it’s fun managing it and it creates an experience. It’s fun while it’s here but I don’t want it for a long time or for the rest of my life.”

Although Chris Bumstead stood out as the clear winner, there was speculation about the shape of his arm muscle development. He came clean about the issue with his arm earlier this week, confirming he participated in the Olympia with a torn bicep. Having not made the injury public beforehand, Bumstead opened up about overcoming the mental challenge the injury presented. He added pictures of the swollen arm and expects to recover fully in the next six to eight weeks.

Following his fourth consecutive Olympia win, Bumstead put an end to the rumors of his retirement. He declared his goal of winning a fifth title and ensured he would continue competing.