Valliere and Krizo exchanged some heated words after Krizo got compared to 'Big Ramy' ahead of his first Olympia appearance. 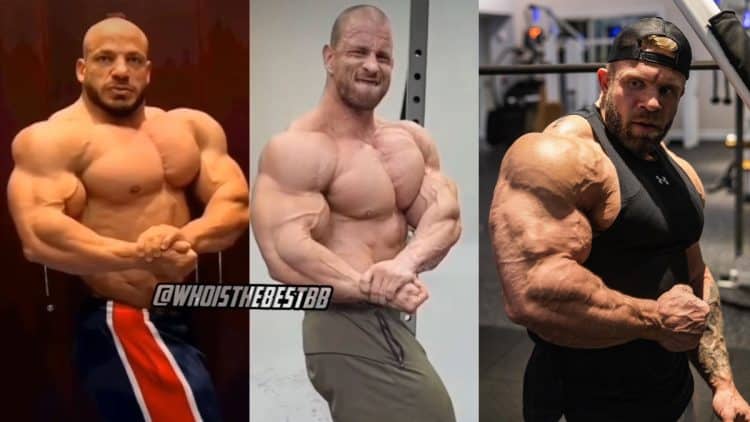 Rising sensation Michal Krizo has emerged as one of the most exciting talents for the upcoming 2022 Olympia, scheduled for Dec. 15-18 at Planet Hollywood Resort & Casino in Las Vegas, Nevada. In a recent Instagram post, Krizo was compared to defending champion Mamdouh ‘Big Ramy’ Elssbiay. This prompted an argument between Iain Valliere and Krizo.

Krizo first gained attention during his run in the IFBB Elite Pro League. After weeks of speculation, Krizo announced his highly anticipated switch to the NPC. The announcement had fans excited to see the Slovakian bodybuilder line up against some of the freakiest mass monsters in the Men’s Open division.

Last month, Krizo earned his IFBB Pro card with a dominant win at the 2022 Amateur Olympia in Rome, Italy. Krizo followed up with another win at the 2022 EVLS Prague Pro in the Czech Republic recently. He managed to get his first Pro victory in the IFBB Pro League and earn his Pro card in the same month. Krizo’s Prague Pro victory punched his invitation to 2022 Olympia, where he will battle against Valliere.

Men’s Open standout Iain Valliere is determined to improve his placing from last year. He recently ended his longtime ‘coach-client’ relationship with three-time Classic Physique winner Chris Bumstead to focus on his own career. Last week, Valliere showed off his impressive glutes and massive back lat spread in a physique update just six and a half weeks out from the Olympia.

This year’s season is turning out to be one of the most exciting and competitive. Reigning two-time Mr. Olympia champion Mamdouh ‘Big Ramy’ Elssbiay goes into the contest as a favorite to retain his title and secure a third Sandow trophy. Valliere believes Ramy could easily outsize his competition at the show but argued that judges could penalize him for having a noticeable ‘hole’ in his right quad.

In a recent Instagram post, Michal Krizo and Big Ramy were compared in a side pose. Valliere took issue with the early comparison and received a fiery response from Krizo in the comment section.

“lol right into the show and being compared with the champ,” wrote Valliere.

Krizo responded, “Ian is still cry baby . In Olympia i show him what is bbding.”

Valliere commented on a photo of the interaction between Krizo and him shared by user bisandtris, “Well he certainly has the longest neck and smallest head! That’s a win!”

Michal Krizo has received major backing from numerous bodybuilding legends. The 1983 Mr. Olympia winner Samir Bannout is so confident in Krizo he believes a top-three finish is almost destiny.

He encouraged Michal to ‘torture himself’ with posing, similar to that of iconic bodybuilder Frank Zane. Four-time Mr. Olympia Jay Cutler believes Krizo will be a real threat at the show as well and suggested he could make first callout in his debut at Olympia.

RELATED: Bodybuilder Michal Krizo Discusses Training and 2022 Olympia Campaign: ‘The Plan is to Be as Big as Possible’

Iain will face intense competition from Krizo, who has a lot of momentum going into his Olympia debut. Krizo recently showed off his insane physique while crushing a chest workout just six weeks out from the Olympia. Given the sport’s latest rivalry, excitement surrounding 2022 Olympia continues to grow.