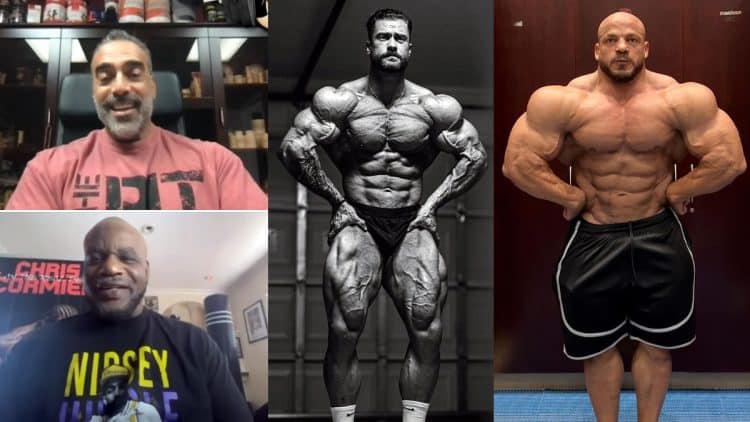 Bodybuilding Hall of Famer Chris Cormier has established himself as a revered analyst after moving on from professional competition in 2007. In a recent YouTube video uploaded to Muscle and Fitness’ channel, former IFBB Pro Jimmy Mentis joined Cormier to predict the top six for the upcoming 2022 Mr. Olympia and discuss who could potentially outsize Chris Bumstead in the Classic Physique division.


Things are heating up in the Classic Physique division. Chris Bumstead, a three-time Classic Physique champion, won his first Olympia in 2019 after defeating two-time Classic winner Breon Ansley. He has retained his throne since and has the chance to create history by getting his fourth trophy in a row. He shared a physique update flexing his insane v-taper and slim waist with just under seven weeks out from the Olympia.

From powerhouse Mamdouh Big Ramy’ Elssbiay to rising sensation Andrew Jacked, real name Chinedu Andrew Obiekea, this season is turning out to be one of the most competitive in years.

Reigning two-time champion ‘Big Ramy’ enters the contest as a favorite to defend his throne. Chad Nicholls, Ramy’s coach, guaranteed that this would be the best version of Ramy ever at 325 pounds. Last week, he shared a massive physique update showing off his crazy back development just six and a half weeks out from the Olympia.

Men’s Open standout Jacked will look to prove himself on the sport’s biggest stage. He earned his Pro card with a commanding showing at the 2022 Arnold Classic Amateur in March.

In August, Jacked made a statement win in his Pro debut at the 2022 Texas Pro, where he dispatched veteran Steve Kuclo and budding prospect Martin Fitzwater to take the top prize home. Then he picked up the victory at the 2022 Arnold Classic UK show.

Mentis shared his predictions for the top six at 2022 Olympia, scheduled for Dec. 15-18 at Planet Hollywood Resort & Casino in Las Vegas, Nevada.

He wouldn’t be surprised if Bonac surprised some people at the show later this year.

“There’s something about Bonac this year that feels that he needs to, I wouldn’t doubt that he’s pulling a Kevin Levrone and sleeping the floor every night.”

“Jacked is good but I don’t have him in the top six.”

In a recent video uploaded to the channel Muscle and Fitness, Jimmy Mentis and Chris Cormier shared their thoughts on the dominance of defending champion ‘CBum’ in Classic Physique.

“I think Hany got a style about him when it comes to building a physique and I don’t know if it’s the classic style that I was talking about,” added Cormier. “But it’s probably going to be a little different. He’s going to look different.”

This will be Bumstead’s first Olympia without longtime friend and coach Iain Valliere. Last month, ‘C-Bum’ revealed that the pair were ending their ‘coach-client’ relationship as Valliere wanted to focus on his career instead.

Cormier and Mentis both agree that Chris Bumstead will likely outsize his competition again. Although Bumstead is already huge for the division, Cormier believes he could still add a few more pounds to fill out his physique.

As of late, Chris Cormier gave his take on the timeless debate between aesthetics and size. He argued Akim Williams was a hybrid of both mass and aesthetics. He backed him as the dark horse for the Olympia. According to Cormier, former Mr. Olympia Brandon Curry could also get the title back if he ‘puts it together.’ Suffice to say, this year’s Olympia competition is loaded with talent.