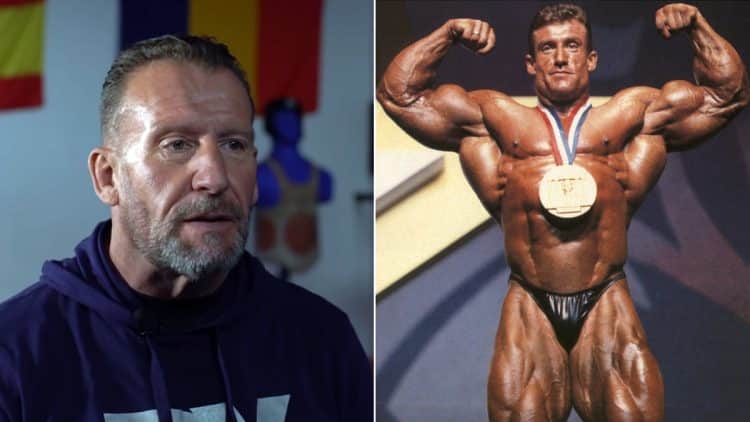 Legendary bodybuilder Dorian Yates developed a reputation for himself with high-intensity training methods throughout his career. He dismissed the regular bodybuilding approach to training that used a set number of reps and sets. Instead, he focused on reaching near failure every time he worked out. In a recent video posted on YouTube, Yates opened up about his workout regimen and revealed what he would change if he could go back in time.

Yates has long moved on from his days of competition but maintains a strong presence in the bodybuilding community. During his prime, he went head-to-head with legends such as the eight-time Mr. Olympia Lee Haney, Chris Cormier, Flex Wheeler, and Shawn Ray. Despite the intense battles, Yates managed to come out on top and won the Mr. Olympia title six times in a row from 1992 to 1997.

He was renowned for keeping a low profile in the off-season. He would stay away from the spotlight and keep working hard in the gym to bring improvements to the stage. This habit earned him the nickname, ‘The Shadow,’ as he worked in silence and let the results do the talking.

Yates collaborated with fitness model Mike Thurston recently for a brutal leg day training session. Thurston utilized the mentorship of Yates who guided him through his signature philosophy of ‘pushing to failure.’ The pair started with warm-up sets before using all-out sets to failure.

In a recent video posted on the YouTube channel of Muscle and Fitness, Yates opened up about never working out for more than an hour during his prime.

“I never trained more than an hour. Every day for me was like, this day is a winner. This workout is a winner, this day, I’m going to hit every meal, sleep, everything. Not like I might miss that occasionally, no, it was non-negotiable.”

Yates expanded on the motivation behind filming Blood & Guts, an old training video where he commonly shared his workouts.

“The idea when I made the blood and guts training video as it was at the time, I never saw anything of people training in the gym that was really inspiring for me. I heard about Tom Platz’s training and stuff like that but I never saw it. Usually, they’re filming the guys just before a contest or they film some training but it’s with the correct lighting, and multiple takes to get the perfect shot. It was made from the perspective of the people making the movies, which is technical.

“So I said, ‘I want to make a real training video. I want somebody to film me as I’m training. No lights, no talking to me, no getting in the way, I’m just going to do what I always do and we’re going to get that on film. That’s what came out and it was just a normal training week. I always trained like that.”

Yates has no regrets from career, but he would change his high-intensity training to avoid injuries

When asked if he had any regrets about his past, Dorian Yates had the following to say.

“Ultimately, no because I am where I am and I am happy and everything that happened before brought me to this place so it’s like, one of those movies, if you went back and changed time, it would change everything. One little change would change everything. I can tell you things that I learned that maybe I could have done differently but I don’t like to look back with regret and say, ‘I should have changed this I should have changed that’ because everything worked out the way it did but definitely I could have been a bit easier on myself.

“I could have been a bit more easier on the people around me, a bit more time, a bit more flexible, enjoy the process a little bit more, but I was in a tunnel. When you’re in the tunnel, you just see the light at the end and you’re just going to keep going and going. That was my mindset.”

If he could go back in time, Yates admitted he would taper down his training near bodybuilding shows to avoid injuries.

“With what I know now, I could have avoided my injuries. Because this type of heavy high intensity training is great to build muscle but you’re not in a position to build muscle the last six to eight weeks before a contest because you don’t have the sufficient calories. Your body fat’s getting lower and maybe slightly dehydrated, and you’re not getting in as much sleep. I suspect also the anti-estrogen drugs that we used, they tend to make tendon injuries more likely I think, that’s my theory.”

Yates won the Sandow trophy six times; he has a good idea of what the judges look for in a winner. Last month, he gave his insight to up-and-coming prospects about how to optimize their posing routines.

While he does not compete as a professional anymore the 60-year-old recently shared his first bodybuilding cycle. He opened up about his favorite steroid, which was Dianabol, and revealed that he is micro-dosing testosterone nowadays. Dorian Yates continues to be an influential figure in the bodybuilding community.