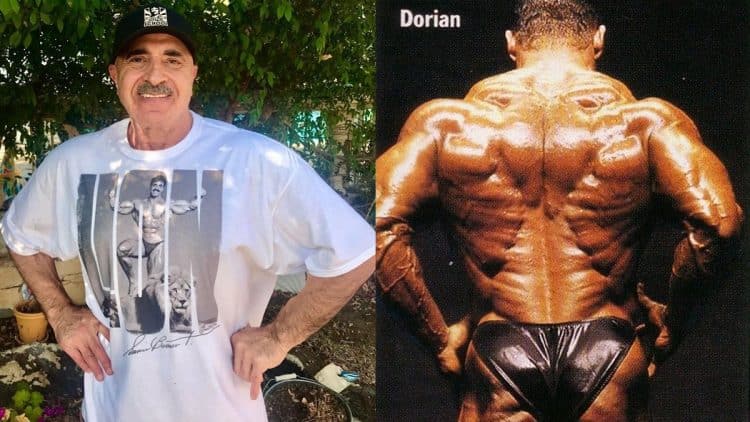 Samir Bannout, a 1983 Mr. Olympia winner, led an exciting career that saw him face a number of high-profile legends in the sport. On the latest episode of the Muscle Maturity Podcast, Bannout reflected on competing against the ‘crazy’ six-time Olympia champion Dorian Yates.

“He really made a living out of his back because his back was his bread and butter.” Samir Bannout shared.

Dorian Yates claimed the Olympia title for six years consecutively throughout the 90s (1992-1997). As a result of his six Sandow trophies, Yates has the fifth highest number of Olympia victories in the history of the sport, behind Ronnie Coleman (8), Lee Haney (8), Arnold Schwarzenegger (7), and Phil Heath (7).

Recognized for his wide and shredded back, Yates’ massive frame made him an imposing champion. Dorian was lauded for his work ethic and the bodybuilder preferred to train in silence so his physique could do the talking when it was time to perform on stage. Given his ability to make improvements in the off-season, the English native earned the nickname “The Shadow”.

Samir Bannout, who faced Yates on the big stage, was inspired by the way the legend trained. From diamond-cut calves, and hamstrings, to a Christmas tree back, Bannout gave his thoughts on some of the attributes that helped Yates reach worldwide success.

During the recent podcast, Samir discussed Yates’ most dangerous weapon and his dedication to the sport of bodybuilding.

“Dorian’s back side was really what won him the Olympia six times. That’s my honest opinion. I mean, his legs were great. His back, his hamstrings, and his calves were incredible. His back was awesome.” Samir Bannout said on the Muscle Maturity Podcast.

Bannout said Yates was able to win the prestigious Mr. Olympia title mostly because of his ‘awesome’ back. In addition, Samir praised the hamstrings and calves of the retired pro. Similar to his own workout regimen, Samir stated Dorian got his legendary back by training bent over rows and chin ups, which he practiced with a ‘vengeance.’

“Do I think Dorian was gnarly with muscle? Hell yeah, he was but Dorian worked his back. Samir Bannout explained. “We trained kind of similar. He did heavy bent over rows. He did chin ups and he trained with vengeance.”

Inspired by Dorian’s exhaustive high intensity training, Samir called the legend a ‘fuc**ng bull’ for his commitment to the sport.

“This kind of training really energized me and made me push a little harder. This is really what activates the deep muscle fibers when you go all out. That was common. I think Dorian… look at some of Dorian’s videos. He was a fuc**ng bull. Dorian was crazy. He was crazy. That’s why he was gnarly because he would train his ass off.”

While Samir wasn’t able to secure multiple Olympia titles like Dorian, he admitted he enjoyed training his back from all angles, nonetheless.

“I think I attributed that [my back] to hard training, intense training, variety of training my back from all angles. My back looked like peanuts when I started. Bannout said. “I loved back training.”

Despite having stepped away from the sport competitively, Bannout still brings a lot of value to the bodybuilding community. He tackles any current events related to the sport, even sensitive topics like steroids.

Samir has warned older athletes about the dangers of ‘certain androgens’, which he says thicken the blood and can cause serious health problems.

Meanwhile, Yates has been enjoying retirement. He is prioritizing his health after 12 years of using steroids. The Open class legend shared a shredded physique update at 60 years old recently.

Just a few days ago, the six-time Olympia titleholder guided fitness model Mike Thurston through a detail-oriented chest and biceps workout. Evidently, Yates approaches the gym in the same way that saw him build one of the sport’s most dominant backs.

During his prime years, Samir Bannout was tasked with facing some bonafide legends of the sport. Looking back on his career, Samir is still shocked by Yates and his ‘crazy’ dedication to improving his physique.