The 8x Mr. Olympia shot down a comparison with Nick 'The Mutant' Walker following a previous episode of Fouad Abiad's Bro Chat podcast. 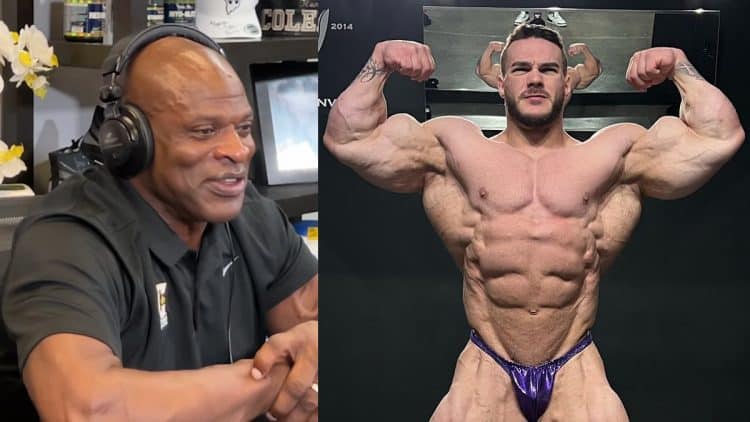 Throughout his career, bodybuilding legend Ronnie Coleman was revered for his shocking size and muscularity. In a recent video, Coleman reacted to having his biceps compared with rising Men’s Open talent Nick Walker.

“Big Ron here. We’re in the office today. I’m doing a reaction video to Nick Walker. He supposedly has some body parts kind of similar to mine… I can’t wait to see this shit. Man. Let’s go,” Ronnie Coleman said.

During his tenure, Coleman’s blend of conditioning and size overpowered his competition. He’s long stepped away from competing but inspired several mass monsters to enter the sport following his departure. One of which was Nick Walker.

It didn’t take long for fans to notice Walker’s freaky size. He led a successful rookie season last year when he won the 2021 New York Pro and Arnold Classic titles consecutively. In his first-ever Mr. Olympia appearance, the 28-year-old walked away in fifth place. His confidence has soared in the last few months leading up to 2022 Olympia. And while Walker indeed sports huge arms, Coleman doesn’t believe they were on par with his.

Related: Top 12 Bodybuilders with the Biggest Biceps in the World

Ronnie Coleman Laughs Off Arm Comparisons With Nick Walker: ‘It’s Not Just About Being Big’

After Abiad said he had no similar body parts to Coleman, Walker gave his thoughts on the topic.

“That’s comical. What the fu** are they talking about!? I shouldn’t be in no way [in] this conversation.”

Iain Valliere, Abiad, and Walker all agreed that Coleman’s bicep peaks made his arms stand out during his career. Abiad clarified that the short peaks made Ronnie’s arms look better. According to Justin Shier, Walker’s biceps were comparable to Coleman’s during his reign. However, the eight-time O winner added that it takes more than size to be the best at bodybuilding.

While Walker thought his biceps were bigger than Coleman’s, Abiad shared that he doesn’t have nearly as much detail as the former Open class king. Valliere specified that Nick’s arms were bigger, but Coleman’s arms were more conditioned with better separation.

“It ain’t about size. We ain’t doing the size show. We’re doing bodybuilding guys,” Coleman said. “He’s [Nick Walker] big now, I’ll give him that. I just don’t see him beating Ramy. I don’t see that at all.”

Ronnie Coleman gave his thoughts on the nearing 2022 Olympia contest before wrapping up the video. The marquee show takes place in less than two weeks. Coleman believes Walker is likely to slide into the top 10 but wouldn’t place him ahead of the reigning champion Mamdouh ‘Big Ramy’ Elssbiay, Bradon Curry, William Bonac, and Hadi Choopan.

Back in October, Coleman gave his official Olympia predictions for this year. He went so far as to congratulate Ramy on his title defense in two weeks. As for Walker, Coleman predicted he will probably finish in fifth again as he did in 2021.

This wasn’t the first time that Coleman was involved in an ‘arms race.’ In their respective primes, Coleman and Jay Cutler compared the size of each other’s biceps. By a fine margin, Coleman’s 23.5-inch guns eclipsed Cutler’s 22.5-inch arms.

Coleman respects Walker’s progress in the IFBB as well as his impressive arms. However, as far as quality is concerned, Coleman doesn’t believe “The Mutant’s’ arms would hold a candle to what he brought back in his heyday.

Read also: Top 18 Girls with the Biggest Biceps in the World