Bodybuilding Legend Flex Wheeler Reflects on Mental Battles and Right Leg Amputation: “I Wouldn’t Wish This on My Worst Enemy”

"The Sultan of Symmetry" shared his arduous battle with adversity and reflected on losing his right leg: 'I’m thankful I’m still here, we’ve lost so many people, especially in the bodybuilding community' 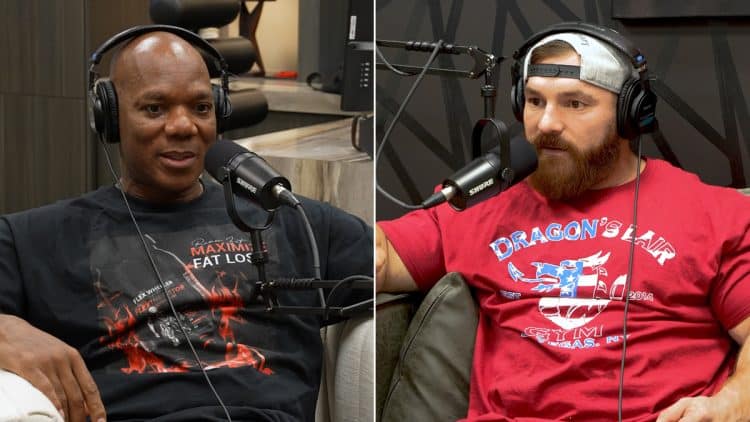 Bodybuilding legend Flex Wheeler sacrificed a lot during his time competing as an IFBB Pro bodybuilder. In an interview with Flex Lewis, Wheeler reflected on battling adversity, his drive to be the best bodybuilder in the world, and the mental battles that followed his right leg amputation in 2019.

“I wouldn’t wish this on my worst enemy. Just, having to put your leg on, looking down there and realizing that it’s not there,” says Flex Wheeler.

Wheeler is considered by many to be one of the best bodybuilders never to win a Mr. Olympia title. His consistency at Olympia contests is marveled today, and he has graced the stage with countless legends, such as six-time Mr. Olympia Dorian Yates, veteran Shawn Ray, and eight-time Olympia winner Ronnie Coleman. He was known for aesthetics, and routinely brought sharp conditioning, slim waist, and even proportions to any contest he entered.

During and after his bodybuilding tenure, Wheeler has unfortunately struggled with a litany of health issues. In 2019, blood clots and kidney failure led to the Open pro finding himself in the hospital. Doctors informed Wheeler that his right leg would require partial amputation. Despite the procedure, he found himself in the hospital again for acute kidney failure last year while fighting a Covid diagnosis.

Since then, Wheeler has continued to fight in spite of his poor health. He underwent back surgery earlier this year, and most recently, a torn rotator cuff procedure on his shoulder, which resulted in an extended hospital stay and excruciating pain.

When he spoke with retired pro Dennis James recently, he told him that his kidneys (which were transplanted into his body after a 2003 car accident) were starting to show signs of failure. These struggles have prompted the legend to reflect and speak about his arduous journey.

In episode 14 of the Straight Outta The Lair Podcast, Wheeler talks about his struggles as a young man and developing the drive to be the best bodybuilder in the world.

“I wasn’t mature enough [to win the Olympia title] mentally. I had such massive issues mentally. I was highly suicidal throughout that whole time. First time I tried to take my life I was just 13 years old, so I had massive issues. Being homeless, being molested, being beat… all that stuff.” Flex Wheeler shared.

Wheeler believes everything happens for a reason and had he won the Olympia title, he’s not sure he would be where he is today.

“I always understood, hey listen, it’s like your daughter, if she’s playing next to a socket — she doesn’t know any better, but you do, your dad. So, he knows better. So as bad as I was, and as hard as I was to handle, I always understood, yeah if I won that title, I’d probably wouldn’t be here right now. I’m pretty confident I wouldn’t be here right now. I’m 100% sure because I wasn’t mature enough. I was so full of myself.” says Flex Wheeler.

Wheeler recounts the relentless drive he felt as a bodybuilder and knew he had to stay immersed in the sport while he was competing. Flex says his rough upbringing factored into his ability to make ‘great things.’

“That was just my drive. I just didn’t believe in anything else that didn’t help me achieve or get better at my craft. Wheeler explained. “I knew that incredible, boring, dull, unhappy environment, I created diamonds. You look at diamonds and they are created in the most hostile environment in the world.

Before adopting a different mindset in 1999, Wheeler remembered entering shows with the expectation that he would take second place to bodybuilding legend Ronnie Coleman.

“I’ve got to stay immersed in this hell and create the best version of me. I knew that’s where I was able to make things happen and I was happy and comfortable with that. Wheeler said. “I literally would tell myself that I don’t deserve to be number one in the world. Listen, if you came to the Iron Man or the Arnold Classic — you’re in my house. You’re going to have to take this from me.”

However, when it came to the Arnold Classic or the Iron Man contests, those shows were different, and so was his tenacity.

“Every time I went to the Olympia up until 99, I’m like, ‘I’m here to take second.’ Oh yeah, I’m here to take second. I understood the business side of it, but I just didn’t believe in myself either. I remember getting into arguments with Shawn [Ray] and Kevin [Levrone], all the time, like, ‘how could you think like that?’ I’m like, why go after something that is unachievable and break myself?” Wheeler shared.

Wheeler realized that Coleman’s look was being rewarded, and said he followed suit but continued to settle for second place.

“They titled and credited his being the look to go after. So, I had to follow suit. So, I ended up chasing him [Ronnie Coleman] trying to get bigger and bigger. I switched gears and said, ‘okay, I’m not going to take Ronnie on.’ I’m just going to try to take second place because I know that’s achievable.”

Wheeler on Right Leg Amputation: “It Was Either That or Die”

Despite his hardships, the 57-year-old is happy to be alive, though he admits his constant pain has become one of his greater challenges in retirement.

“I’m thankful I’m still here, we’ve lost so many people, especially in the bodybuilding community.” Wheeler stated. “It’s been almost three years; it will be two years that I lost my leg in November. It’s been about three years since I’ve been going through pain. I stay at like between a seven and 10 all day long.”

Wheeler remembers the exact moment he gave doctors the okay to amputate his leg as well as his family’s reaction.

“I don’t know why but I know there is a reason and I’m thankful and I remember when I made the decision to let them take my leg. It was either that or die. Before that, I was in a coma for 10 days and my family was actually arguing and fighting whether to allow them to take my leg or they were like, ‘no you guys don’t understand. If you take his leg and he wakes up, we are all paying for this.’

I remember when I had to make the decision, I was like, just take it. It was just something that came over me. I just said, you know, I’m built for this. Everything I’ve been through in life was preparing me for this moment. I just want to be a beacon of light for other people. No matter what, I’m going through this, there’s somebody out there that’s going through worse than I am.”

Even though he’s stepped away from the sport competitively, his presence is still felt in the sport today. Wheeler has helped coach and shape rising Open class newcomer Andrew Jacked (Chinedu Andrew Obiekea). Andrew recently won the 2022 Texas Pro title and earned his invitation to Mr. Olympia. Like his coach Wheeler, Andrew has an aesthetic build with a slim waist.

Wheeler may have hung up his posing trunks but his influence on the sport is as prevalent as ever. Given the countless struggles he’s endured, the bodybuilding legend continues to inspire the next generation of talent.