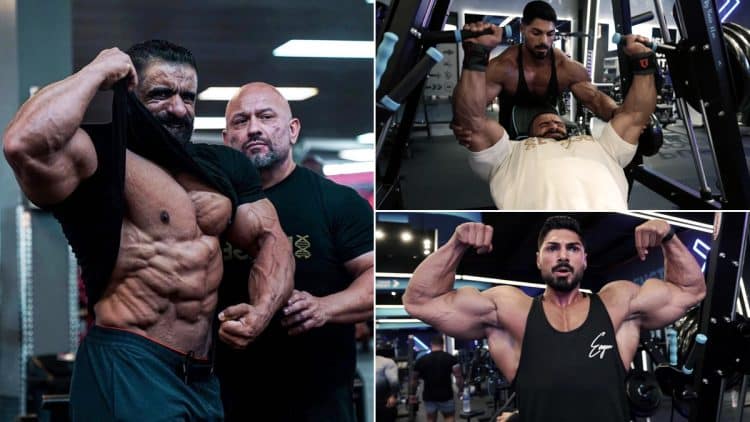 Andrei Deiu is a Romanian IFBB Pro bodybuilder, fitness influencer, and entrepreneur. He is currently traveling around the world to train with the best. One of the most popular Men’s Physique competitors, Deiu is a two-time Mr. Olympia participant. His fifth-place finish at his Olympia debut in 2020 proved that Deiu is a lot more than just an influencer and belongs in the elite bodybuilder club. The 28-year-old finished seventh at the 2021 Olympia. This year, Deiu competed at the 2022 Texas Pro and cemented a second-place finish behind winner Daniel Ammons.

The Romanian bodybuilder is yet to earn a qualification for the 2022 Olympia. He is training under the guidance of famed bodybuilding coach Hany Rambod to improve his physique and prepare for the next show.

Recently, he traveled to Dubai and joined hands with Coach Rambod and fellow bodybuilder Hadi Choopan for a chest workout. Choopan is an Iranian professional bodybuilder in the top echelons of the IFBB Pro League Men’s Open division. The 35-year-old finished in the top three at Mr. Olympia in 2019 and 2021. He will attempt to dethrone the reigning champion Mamdouh ‘Big Ramy’ Elssbiay at the 2022 Olympia to take home the coveted Sandow trophy.

Deiu and Choopan cashed in on a rare opportunity to train together under coach Rambod’s guidance. The video of this training session was posted on Deiu’s YouTube channel.

At the beginning of the video, Deiu spoke about training with Rambod after a long time. He said:

Deiu warmed up on the treadmill and started with lateral raises on the machine to work the shoulders. However, Rambod instructed him to train chest with Choopan, and Deiu obliged. This chest workout consisted of compound and isolation movements performed on selectorized and plate-loaded machines. The duo probably avoided free weights to minimize the risk of injury.

The Romanian bodybuilder adjusted to the change of plans by warming up on the cable incline chest press machine. Deiu stated that he feels cable machines are better at helping him build a mind-muscle connection than plate-loaded machines.

Deiu and Choopan started the chest workout with the vertical chest press machine to work the middle pecs. The bodybuilders performed a few good sets of this exercise and took to the next one.

The bodybuilder duo next performed the incline bench press on this plate-loaded machine to fire up the upper pecs. The weights on this machine move at an angle rather than straight up and down. Deiu opined that this actually makes the weights feel a lot heavier.

Choopan and Deiu got a few sets of this exercise under the belt and moved on to the next one.

Deiu and Choopan returned to the incline chest press machine for their working sets. Following this, they jumped into an isolation movement next to stretch the pectoral muscles.

Rambod instructed Choopan and Deiu to do this isolation movement next. The plate-loaded machine used for this exercise had cylindrical pads for locking the forearms instead of grip handles. This eliminates the grip and forearm strength from the movement and helps concentrate on the target muscles. The bodybuilders performed the incline chest fly on this machine before returning to working the chest with compound movements.

“I think if I can train for three four months with these guys, I am going to f***ing grow,” Deiu said after finishing the sets.

Choopan and Deiu returned to the Power Smith Machine Dual System next. However, they performed the decline chest press on this machine this time. After performing a few sets of this exercise with incrementally heavy weights, the duo took to the next movement.

Deiu and Choopan next performed the flat bench chest fly on a plate-loaded machine to achieve a skin-ripping muscle pump.

One of the most effective movements to activate the pectoral muscles, the cable iron cross is more than just another finisher and deserves a place in every chest routine for making meaningful gains. This isolation movement served as the last exercise of the chest day as the bodybuilder duo wrapped up the session after a few solid sets.

“It’s so good to see everybody and training with them. [Choopan] actually motivated me and pushed me to train even harder,” Deiu said about Choopan.

Choopan, a native of Iran, trains in his home country. Recently, Coach Rambod opened up about the difficulties in coaching the 35-year-old due to travel restrictions and linguistic barriers. However, the Iranian powerhouse is unfazed by the hurdles and continues to impress with his ever-improving physique. Furthermore, Hadi recently arrived in the United States almost seven weeks before the 2022 Olympia. Choopan is focused on winning the prestigious Mr. Olympia title, While Deiu’s Olympia aspirations depend upon the work he does in the coming few weeks to earn a qualification for the upcoming Olympia, scheduled for Dec. 15-18 in Las Vegas, NV. Deiu is doing everything in his power to develop an even more impressive physique, and it will definitely reap fruits when he steps on stage next.

You can watch the full workout video below, courtesy of Andrei Deiu’s YouTube channel: