Bodybuilder Hadi Choopan is preparing his physique in the offseason with intense training and looks massive. 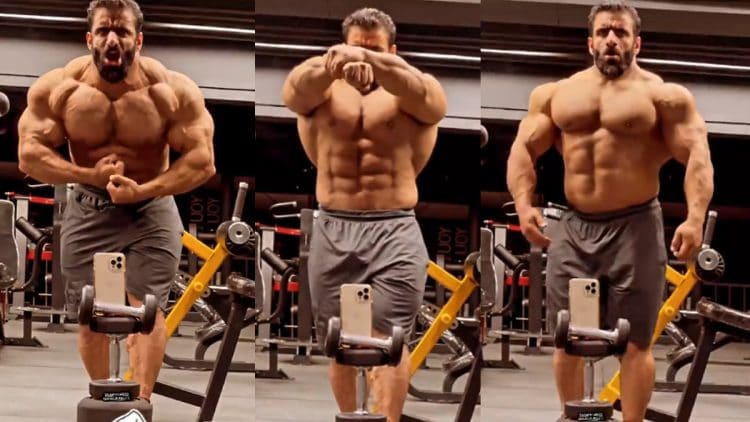 Hadi Choopan is back in the headlines after sharing a physique update during the offseason. Choopan recently showed off his gains and hit a series of exercises on his Instagram page.

Iranian Bodybuilder Hadi Choopan often goes under the radar because he is not one for issuing consistent physique updates. The Iranian native competed at the 2021 Mr. Olympia show and managed to secure third place. However, many pundits and fans thought he should have placed higher. In 2019, and 2021, Hadi was awarded Olympia’s “People’s Choice Award” which highlighted his physique as one of the most elite in the talent pool.

Before competing at the 2021 show, Hadi took part in Mr. Olympia in 2020 and placed fourth. Hadi has proven that if he takes the time to improve his conditioning and size, he’s a force to be reckoned with at any bodybuilding show, and it doesn’t matter who he is standing next to.

Hadi kicked off his career in the early 2000s. He had previously competed in the 212 division however in recent years he opted to take part in Men’s Open division.

Despite being undersized when compared to many Open Men’s competitors, Hadi has proven himself to be a viable threat as he always comes into the top shows with incredible conditioning. After placing third at the 2021 Mr. Olympia, just like in 2019, Choopan is hellbent on coming into the biggest show of the year with a chip on his shoulder.

In a recent physique update on Instagram, Hadi shared his current build, and he looks like he put on some muscle mass and his conditioning is on point. With prep mode starting early, it will be exciting to see what he brings to the stage this Dec.

“The Persian Wolf” looks incredible during the offseason. One of Hadi’s strengths in the sport is his consistent ability to present a well-balanced package. The bodybuilder has a knack for keeping his upper body proportionate with his lower half.

In 2021, Hadi lost to the two-time Mr. Olympia Big Ramy, and 2019 Mr. Olympia and Arnold Classic champ, Brandon Curry. Despite being undersized, his stage-ready physique certainly gave some of the top bodybuilders in the sport a run for their money.

As he dives into offseason prep, Hadi shared a video on his Instagram page. Choopan is seen plowing through a variety of exercises and raised eyebrows with a brutal deadlift session.

Hadi isn’t the only bodybuilder who believes that he can topple Mamdouh Elssbiay AKA Big Ramy. Seven-time Mr. Olympia winner Phil Heath is convinced that he can defeat Ramy. Phil is trained by Hadi’s coach, Hany Rambod, and the pair are convinced that Choopan can take home his first Sandow trophy with proper dedication and preparation this year.

Choopan is well on his way to an exciting season of bodybuilding. With his recent physique update and a corresponding training video, it’s clear Hadi is taking his offseason training seriously despite Mr. Olympia being several months away.