Top names in the Men's Open division share the progress they've made so far for the 2022 season. 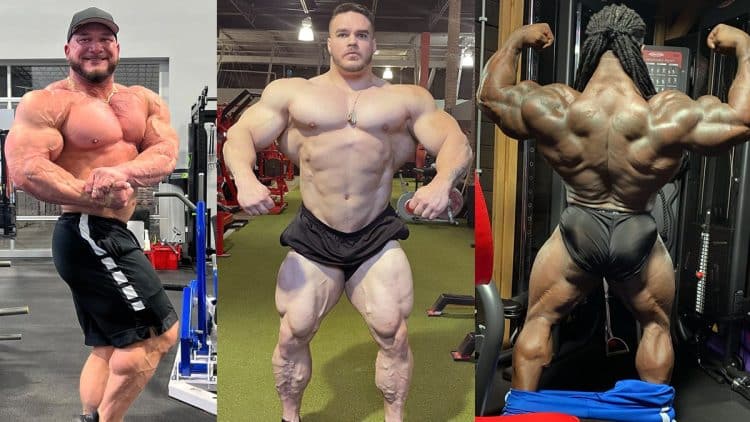 The Men’s Open lineup for 2022 Mr. Olympia continues to strengthen. In a series of posts made to Instagram, Hunter Labrada, Nick Walker and William Bonac show off the progress they’ve made during their current bodybuilding seasons.

The reigning two-time Mr. Olympia Mamdouh ‘Big Ramy’ Elssbiay turned in a physique update last week, which left the bodybuilding community in a state of awe. He tipped the scales at a staggering 337 pounds and sent a warning shot to any Open competitor thinking he may have been slipping this year.

One athlete looking to dethrone Ramy is Hunter Labrada, son of bodybuilding Hall of Famer, Lee Labrada. His roundness and overall proportions make him a dangerous opponent on stage. Last year, Hunter gathered steam as an Open competitor following his 2021 Chicago Pro victory. He earned his 2021 Olympia invitation as a result and finished the prestigious event in fourth place.

In addition to Hunter, Nick Walker is another name eager to topple Ramy in the coming months. Nicknamed “The Mutant,” Walker sports some of the biggest arms in the IFBB Pro League. He won the 2021 New York Pro and Arnold Classic back-to-back. He was pushed on stage at his first Olympia appearance, when he finished the show in fifth place, behind one of his friendly rivals, Hunter Labrada.

2020 Arnold Classic winner William Bonac also plans to make a statement at this year’s Olympia contest. Bonac earned sixth place last year, behind both Hunter and Nick. However, “The Conqueror” has continued to make improvements away from the Olympia stage. He was the runner-up to Brandon Curry at the 2022 Arnold Classic. One week later, Bonac proved himself by earning first place at the Boston Pro contest.

In a series of posts made to Instagram below, top competitors from the Men’s Open division provided physique updates 17 weeks from 2022 Mr. Olympia.

The first update comes from Hunter Labrada, who revealed a fasted weight of 284 pounds. He added that he intends to start issuing weekly updates throughout the rest of this season.

“17 weeks out from the 2022 @mrolympiallc 💪🏻
–
Bringing the weekly checkins back! Looking forward to having y’all follow along with this prep, it’s going to be a special one👊🏻
–
284lbs fasted
–
Nutrition: as of Wednesday I’m am 100% on my meal plan, which is as follows: 305p/830c/80f from whey isolate, chicken breast, sirloin/ground beef, oats, white rice, fish oil, almond butter, and highly branched cyclic dextrin. Aiming to keep food, and subsequently training performance, as high as possible for as long as possible.
–
Training: Couldn’t be going better if I wanted it to! Im pushing the logbook every time I step in the gym, my connective tissue and joints feel incredible, and most important: I’m having fun and looking forward to training! Currently training on a modified push pull split, if you want the particulars be sure to check out my YouTube, as I’ve done several videos going over it in excruciating detail!
–
Cardio: Implemented a 20 minute fasted walk every morning. Next move will be a 20 min night time walk!” Hunter Labrada wrote.

In preparation for bodybuilding’s biggest event of the year, Labrada hasn’t been shy about sharing training footage. The Open class competitor is testing his physical limits and showed as much during a push day training routine.

The next update included Nick Walker, who has worked relentlessly this season to ensure a better placing at 2022 Olympia. Walker has trained alongside a number of top athletes in the IFBB, like Kamal Elgargni and Derek Lunsford. Last month, the former Arnold Classic champion also worked out alongside his rival, Hunter Labrada. Nick and Hunter emphasized that they would both like to face each other at 100% this year.

Throughout the season, Walker has consistently shared updates with his weight hovering around 300 pounds.

Bonac recently updated fans and revealed he’s weighing 260.8 pounds. While preparing for Olympia, Bonac shared the bulking diet responsible for helping him pack on extra muscle mass. More details about his diet can be found here. To prepare for competitors like Hunter and Nick, Bonac has been training with bodybuilding veteran Roelly Winklaar.

The Open class is overflowing with talent this year. While Slovakia’s Michal Krizo has yet to earn his pro card, his entrance into the NPC has caused quite a stir. Legends like Jay Cutler believe he would be in the first call out if he earns an Olympia qualification. In addition, another mass monster arose in the IFBB last week after Andrew Jacked won his pro debut at the 2022 Texas Pro.

RELATED: Nick Walker on Competing Against Big Ramy at 2022 Mr. Olympia: “If He Comes in Shredded, He’s Probably Going to Win Again”

With a number of bodybuilders eager to make a statement this winter, 2022 Olympia is shaping up to be a historic event. Judging by the impressive physique updates of Hunter, Nick, and William, fans are in for an epic showdown at the end of the year.