Nearly a month after 2022 Olympia, Valliere discussed lat injections and how they could have contributed to Big Ramy's fifth-place finish. 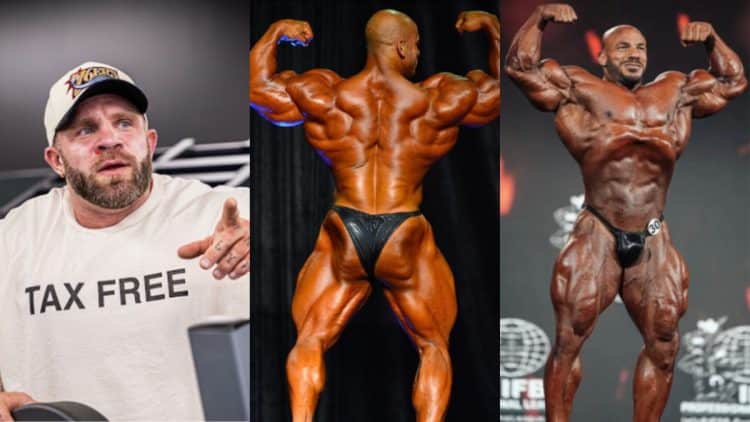 Iain Valliere is the latest bodybuilder to reflect on his performance following the dramatic conclusion of the 2022 Mr. Olympia competition. Speaking with retired pros Fouad Abiad and Guy Cisternino, Iain Valliere also talked about Mamdouh ‘Big Ramy’ Elssbiay falling to fifth place and whether nerve damage played a role in the outcome.

Canadian Men’s Open bodybuilder Iain Valliere quickly made a name for himself in the IFBB Pro League with grainy conditioning and a balanced lower body. In 2020 and 2021, Valliere turned heads after finishing seventh at Mr. Olympia for two consecutive years. Valliere punched his ticket to the 2022 Olympia contest after claiming gold against Antoine Vaillant at the Vancouver Pro last July.

At one of the most competitive Mr. Olympia competitions ever, Iain Valliere was knocked back to 11th place after being pushed by a number of competitors like eighth-place Andrew Jacked and 10th-place 2022 Olympia finisher Rafael Brandao.

Valliere wasn’t the only returning Men’s Open athlete to drop down placings. Big Ramy, the former two-time champion, was dealt a massive blow, having placed fifth on the scorecards. Even though he was a prohibited favorite leading into the contest, many believe, including head judge Steve Weinberger, that Ramy came in off at 2022 Olympia.

Recapping the event, Valliere talked about nerve damage with Abiad and Cisternino. The group also tackled the differences between injecting site enhancement oils versus steroids.

Iain Valliere on Big Ramy’s ‘Disc Degeneration’: ‘Stay Away’ From Lat Injections, They Cause Nerve Damage

According to Valliere, lat injections cause severe nerve damage, especially when athletes pin in the same area for an extended period of time.

“They [Lat injections] cause severe nerve damage and you should all stay away from them because if you look at what happened to me – use me as an example kids,” joked Iain Valliere. “He was making a joke because of my nerve damage in my lats.”

Abiad revealed Ramy is seeking medical attention for ‘disc degeneration’ in his back. Dennis James, a close friend/training partner of Ramy, hinted months ago that parts of Ramy’s physique, specifically, the trapezius muscles, were not ‘activating or firing properly.’

“I think once that muscle is atrophied, I think that’s a long road to get that back bro,” replied Guy Cisternino.

If Ramy and Iain actually have disc degeneration, Abiad and Cisternino agree it will be a long road to recovery.

“It’s not that it’s not a long road, but I think if you have disc degeneration, I think that has something to do with blood flow. I’m way out of my depth right now,” said Abiad.

“I brought up the fact that it’s not just lat injections period. I think that, and it’s my own theory, I think every time you inject a muscle, you run the risk of it atrophying or you damaging it in some way, especially, if you’re repeatedly injecting that same area,” Abiad explained.

Valliere added that he’s injected his lats ‘less than 50’ times during his career, and said the glutes is the safest area to pin.

“I’ve maybe done in my entire life — less than 50 shots in my lats,” Iain Valliere said. “I think glutes [are the safest and best area to inject]. Arms seem more risky.”

“The issues Ramy was having are in his quads and lats. His quads are the biggest quads in the entire planet. If we’re talking about size of muscle being the relevant factor here, then it would take 100 years to for him to get issues there when it would take all of us six months to get it in our fuc**ng delts, and that’s not what’s happening,” Valliere said.

Before ending the conversation, Cisternino touched on the differences between injecting steroids and site enhancement oils like Synthol.

“Is gear versus site enhancement oils different as well [when injecting]. Everything we inject, the body metabolizes. Is it also depending on not the PED you’re injecting, but the actual oil versus, like is it a steroid, or is it Nolotil, or Synthol, or whatever the case may be,” Cisternino added.

After the Olympia contest, one of the biggest storylines was the lackluster backstage conditions. Cutler, who attended the event, said ‘things were a mess,’ and competitors have voiced their dissatisfaction too.

James Hollingshead is among them and said the backstage was poorly lit, crowded, and too cold. Others in the sport have insinuated that these problems caused athletes to come in off. Even coaches complained about the length of the event, as some fell asleep in the audience waiting for the Men’s Open prejudging to start.

RELATED: King Kamali: ‘Flattened Out’ Big Ramy Slipped to 5th at 2022 Olympia From Taking ‘Too Many Diuretics’

Iain Valliere plans to use the recent outcome as fuel moving forward. As for Big Ramy, the former champion made it clear that he hasn’t given up and will return next year in hopes of recapturing his title.