King Kamali: ‘Flattened Out’ Big Ramy Slipped to 5th at 2022 Olympia From Taking ‘Too Many Diuretics’

King Kamali and Jose Raymond explained why Mamdouh ‘Big Ramy’ Elssbiay was off at 2022 Mr. Olympia. 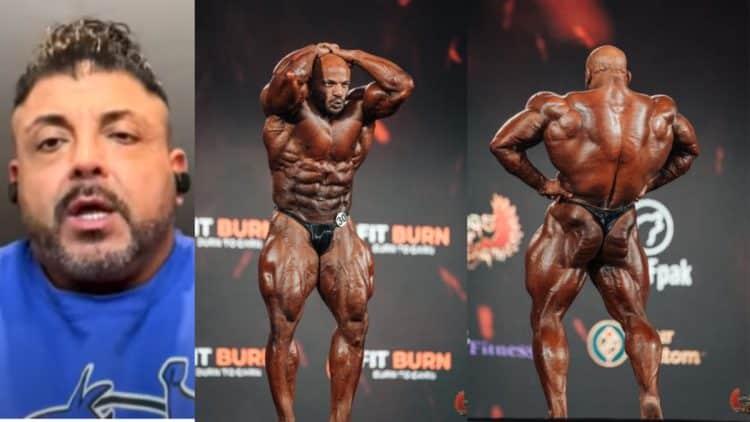 Retired IFBB pros Jose Raymond and King Kamali (Shahriar Kamali) are voicing their opinions on why Mamdouh ‘Big Ramy’ Elssbiay was off at 2022 Mr. Olympia. Speaking in an Rx Muscle interview, Kamali explained that Big Ramy was flat and off at the show due to taking too many diuretics.

On Dec. 17, 2022, the Men’s Open division saw a new champion emerge at 2022 Mr. Olympia. Despite being a massive favorite to win the contest, Big Ramy slipped to fifth place in the biggest shock of the night. Instead, the finals featured an intense three-man battle between Nick Walker, Derek Lunsford, and Hadi Choopan.

After blending size, conditioning, and fullness, Hadi Choopan finally produced a winning package at his fourth Olympia appearance. Former 212 Olympia Derek Lunsford also proved himself on the stage after accepting a special invite for the Men’s Open division back in Sept.

Given the shake-up, many bodybuilding veterans have discussed the results, and especially Big Ramy’s fifth place performance. After all, a reigning champion hadn’t been knocked down that far since Samir Bannout nearly 40 years ago in 1983. Recapping the madness, Jose Raymond and King Kamali discussed what happened to Big Ramy leading up to 2022 Olympia and what is next for the former champion.

King Kamali on Big Ramy: ‘Simple and Easy,’ He Took ‘Too Many Diuretics’ Before 2022 Olympia

Kamali kept his answer short and to the point. He said Ramy used too many diuretics before the show, which can cause bodybuilders to flatten out for 48 hours.

It doesn’t matter if you sit down and eat 16 pizzas and 15 cakes back-to-back when you’re flattening out from diuretics, you’re going to be flat for at least 48 hours. That’s it. There’s no coming back from it. You can’t catch up with it. So, whatever he did those last three days, he could not keep up with it. Then, we can add in the cortisol and the stress and all that stuff,” says King Kamali.

After listening to Kamali, Jose Raymond mentioned that he was surprised Ramy’s close friend/training partner Dennis James didn’t notice problems with his physique leading up to the show.

“I think he got bamboozled by seeing only Ramy every day for so long, and I bet he was in shape. I bet he was lean. His glutes were crazy. He’s huge in person. So, to tell me that he looked like the Olympia champ the day before or the days leading up to it is misleading because how did Dennis [James] whose very smart — not see the missing lats.

How did he not see the 18-inch left triceps and the 23-inch right arm. How do you not see that. I’m not being an ass, I’m just wondering,” says Jose Raymond. “No, he didn’t [have these problems] last year. It was worse this year. There was absolutely no lower lats. He was also not opening up his rear double [biceps pose].”

Days after finishing fifth at 2022 Olympia, Big Ramy confirmed he will make a comeback next year. Dennis James also reacted to the outcome and said he was unsure what happened to Ramy at Olympia. In a later video, Dennis James voiced that Ramy looked flat hours before prejudging.

According to Jose Raymond, Ramy got worse as the show progressed.

“It just made things look worse because he wasn’t as wide as normal and then having wider hips — it just fell apart. Even from the front, like look how much smaller that left arm is,” said Raymond. “He [Big Ramy] looked great just standing there, but each pose he did, it just got worse, worse, and worse. In my eyes, he didn’t look as impressive to me as two or three of the guys that I’ve already seen [while at 2022 Olympia]. When they compared them, my brain was right.”

Jose Raymond Casts Doubt on Big Ramy Comeback: ‘I Don’t Think These Issues Can Be Fixed’

Raymond suspects Ramy could be dealing with nerve issues in his back. He added that four-time Olympia Jay Cutler also lost his lats toward the end of his career.

“To answer your question, can he come back? He’s still the biggest guy on stage. I don’t know. It does appear to be a nerve issue. His arm is significantly smaller, and his lats are definitely gone. There was a good comparison on Instagram that someone posted of a rear double from 2015 to now.

His lats used to come all the way down. No, I don’t think those issues can be fixed. It happened to a lot of people. Jay [Cutler] it happened to; the lower lats disappeared at the end of his career,” says Jose Raymond. “That still looks great to me. When he stands next to guys that are so complete like Derek [Lunsford] and Hadi [Choopan] — that’s going to be very difficult to come back from. I really don’t see it,” says Raymond.

While Kamali and Raymond have their concerns about a potential comeback, Ramy spoke in a long-form interview about his next move. Ramy said he trusts the judges’ decisions and understands he will have to bring a great package next year at 2023 Olympia if he hopes to recapture his title.

After breaking down Ramy’s fall from the top, Raymond and Kamali agree that a number of issues prevented him from success at 2022 Olympia. Given the imbalances, they believe the road back to title contention will be ‘very difficult.’

Should You Work Out While Intermittent Fasting?