Guns so big, they will blow your mind! 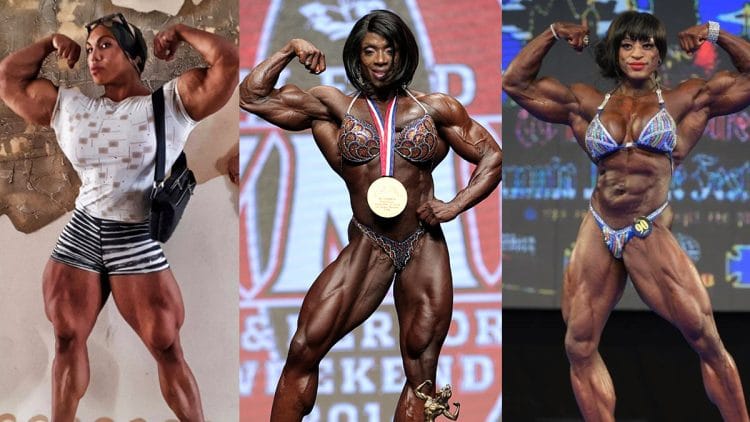 Let’s do a quick exercise before we get into the article, shall we? Don’t worry. It doesn’t include doing burpees or spending a minute on the assault bike.

The Exercise — Close your eyes and imagine a bodybuilder flexing their biceps.

If you’re like most people, you probably imagined a male bodybuilder — possibly Arnold Schwarzenegger — showing off his guns.

However, as any longtime Fitness Volt readers would know, bodybuilding isn’t just for the guys. Female bodybuilders spend as much (if not more) as their male counterparts in the gym.

It’s no secret that times are changing — for the better. People usually have polarizing views about female bodybuilding. They either hate it or love it, but one thing is for sure, they cannot ignore it.

We are already seeing some progress in the department. The 2020 Olympia Weekend saw the return of the Women’s Open division after a five-year hiatus, and the 2021 Olympia featured the inaugural Women’s Wellness division.

Female bodybuilding is finally getting the love it deserves, which brings us to girls with the biggest biceps in the world.

The fact that the 10-time Ms. O winner had one of the biggest and diced physiques in the female bodybuilding space shouldn’t come as a surprise.

Considering the size, shape, conditioning, and separation in her arms, Kyle, at her peak, arguably had the best biceps in female bodybuilding.

Building big arms requires lifting heavy with the correct form for reps. All the girls mentioned on the list are incredibly strong, and Iris Kyle is no exception.

Yaxeni Oriquen is one of the two female bodybuilders to have defeated Iris Kyle on the Olympia stage. She achieved the feat at the 2005 Ms. Olympia, stopping Kyle from winning her second consecutive Ms. O title. Plus, she also won the Ms. International title five times.

Oriquen was born in Venezuela and moved to the United States to make a career in the bodybuilding industry — and make a career she did. Her Instagram page is proof that she loves training her arms and hitting biceps poses.

Oriquen’s sheer bicep size and overall symmetry earn her a spot on the girls with the biggest biceps list.

If there was an award for the best biceps peak, it’d go to Lenda Murray. Murray is no ordinary bodybuilder; she won the prestigious Ms. Olympia title eight times (1990-95, 2002, and 2003), even beating the legendary Iris Kyle after returning from a five-year-long break in 2002.

Lenda Murray did for women’s bodybuilding what Dorian Yates did for Men’s division. She brought never seen before size, symmetry, and conditioning to the Ms. Olympia stage, setting new standards in the process.

Apart from having one of the biggest biceps on a girl, Murray probably has the most vascular arms on this list. She retired from pro bodybuilding in 2004 and was inducted into the IFBB Hall of Fame in 2010.

Besides being one of the most jacked female bodybuilders, Shaw is one of the best ambassadors for the sport. Andrea Shaw has mountain peaks for biceps and sports a well-rounded, symmetrical, and diced figure.

She arguably has the best V-taper in business, which even overshadows some of her male counterparts. Many bodybuilding experts believe Shaw will retain her title for many years to come. Will this turn out to be true? Only time will tell.

Kim Chizevsky is another Ms. Olympia winner on girls with the biggest biceps list. She dominated the biggest stage in bodybuilding for four consecutive years (1996-1999).

At the peak of her career, Chizevsky had 16.5-inch biceps. Although not the biggest, her biceps separation and peak make her stand out on stage.

Kim Chizevsky began her bodybuilding journey in 1988 after starting dating the renowned bodybuilding coach Chad Nicholls. At the time, she was an aerobics instructor, but Nicholls directed her toward bodybuilding, and as they say, the rest is history.

Chizevsky was the first female bodybuilder to win both the Ms. International and Olympia in the same year — 1996.

She retired after winning the 1999 Ms. Olympia reportedly due to gender discrimination guidelines set up by the IFBB that advocated for more “femininity” and less “muscularity” in the sport.

Andrulla Blanchette is the last former Ms. Olympia champ on the list — we promise. She won the coveted title in 2000 and was the runner-up the following year.

The British bodybuilder had 16.75-inch pythons that proved deadly for her competition when she stepped on stage. In her early years, Blanchette was a judo athlete and started lifting weights to add to her combat skills.

However, the former Ms. Olympia champ soon realized her caliber and won an IFBB pro card at the World Games (Netherlands) in 1993.

Brigita Brezovac is a Slovenian pro bodybuilder who was nothing short of a tank during her competitive days. Since her retirement, however, Brezovac has downsized significantly and maintains a Greek-goddess-like figure.

The Slovenian bodybuilder had decided she wanted to be a bodybuilder after looking at pictures of Cory Everson and Anja Langer at the age of 14.

Brezovac won the Tampa Pro and Europa Battle of Champions in 2010, the year of her pro debut, earning herself a qualification for the Ms. Olympia contest in her freshman year in IFBB Pro League. She placed 10th at the 2010 Ms. O. Brezovac improved her Ms. Olympia ranking in 2011 with a third-place finish.

The next entrant on the girls with the biggest biceps list is a world record holder. Renné Toney officially has the largest biceps of any woman in the world. Her biceps were measured at the Arnold Classic Expo in February 2006.

The Brazilian bodybuilder’s right bicep measured 20 inches, and her left bicep was 20.25 inches. Do check out the video above to witness the spectacle for yourself.

Related: The Last Guide for Bigger Calves You’ll Ever Need

Alina Popa is a former Rising Phoenix Women’s Bodybuilding World Champion and a 2013 and 2014 Ms. Olympia runner-up, behind Iris Kyle. She is currently a vice president at Wings of Strength.

The retired American bodybuilder ranks as the third best female bodybuilder in the IFBB Pro Women’s Bodybuilding Ranking List. Laszewski finished second in the 2012 Ms. Olympia behind — you guessed it — Iris Kyle.

Besides her incredibly massive biceps, Laszewski had some of the best triceps in the women’s pro bodybuilding circuit.

Trivia: She started lifting after being motivated by the physique of Linda Hamilton in The Terminator.

Maryse Manios was one of the biggest bodybuilders during her competitive years. Only a few female bodybuilders could match her muscle mass and volume. The front-double bicep was her strongest pose.

A post shared by world of female muscle (@the_femalemuscle)

Jana Linke-Sippl is a female bodybuilder from Austria and a session mixed wrestler. Thanks to her bulging arms and chiseled figure, she won two bodybuilding shows in her career — International Austria Cup (2005) and the Upper Bavarian/Swabian Championship (2003).

The 5’1″ bodybuilder has dense muscle bellies and insane vascularity. Besides her monster muscles, Kashma Maharaj is known for her strength.

If you’re a fan of freaky bodybuilders, you’ll love Colette Guimond. Every time the French-Canadian bodybuilder pulled out her 19-inch guns on stage, her competition ran for cover.

Guimond started working out at 26 and won the 1989 Montreal Championship two years into training. The bodybuilder had to take a long break from competitive bodybuilding in 1997 due to a car accident.

However, she returned with a bang in 2005 to take the first place in the Canadian Women’s Bodybuilding Nationals Heavyweight division, earning herself an IFBB pro card in the process. She won four out of the six contests she participated in during her career.

Isabelle Turell is a podcast host, comedian, and an IFBB Pro. Her thick and grainy arms are big enough to qualify as bazookas and cement her place on the girls with the biggest biceps list.

Aleesha Young is one of the most swole ladies on girls with the biggest biceps list. Her arms and legs looked like they had a life of their own. At her biggest, Young’s biceps measured over 18 inches and quads over 28 inches.

Young started lifting weights at the age of 15 alongside her father, who was also a competitive bodybuilder. The American bodybuilder earned her IFBB Pro card by winning the NPC USA Championships in 2014. Her sole pro show win came in 2019 at the Chicago Pro Championships.

Kuznetsova is a Russian pro bodybuilder. As per her Instagram bio, she is a world deadlift, bench press, and armlifting record holder.

Per Wikipedia, here are her personal bests on the three big lifts —

She speaks openly about her use of anabolic steroids and estrogen blockers. Her 19.5-inch arms and 29.5-inch thighs make her look like a character from a superhero comic.

Jones’s gargantuan biceps earned her a sixth-place finish at the 2020 Ms. Olympia, her best ever at bodybuilding’s biggest stage. She currently ranks as the seventh-best female bodybuilder on the IFBB Pro Women’s Bodybuilding Ranking List.

Building muscle like these women is no joke. Years of blood, sweat, and tears went into carving their physiques, for which they deserve the utmost respect.

The top 18 girls with the biggest biceps list should be used as motivation to go after your goals with all your heart. These women prove that you can achieve the most impossible-looking goals with iron grit and hard work.

7 Reasons You Aren’t Getting Stronger

While a lot of lifters want to build muscle mass and have no real interest in performance, others work out...