John Grimek Workout: A Full-Body Routine From A Legend

Try out this full-body workout routine form one of the greatest bodybuilders that ever lived. 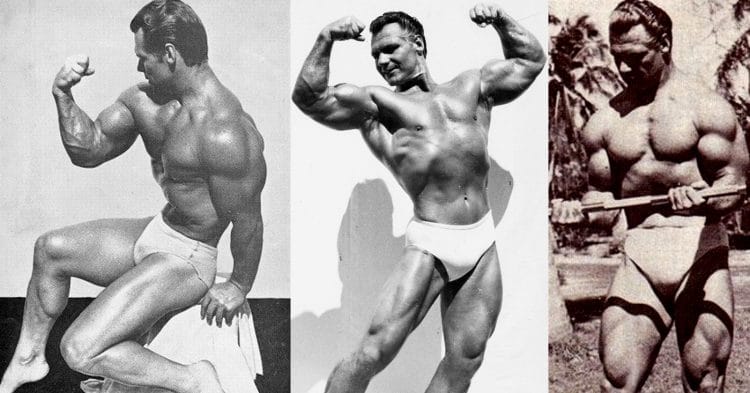 John Grimek was a legendary bodybuilder, weightlifter, and model/entertainer whose name is iconic in the industry. Given the nicknames “The Monarch of Muscledom” and “The Glow,” Grimek won the prestigious Mr. America in 1940 and 1941 followed by the Mr. Universe in 1948.

He built an amazing physique for the knowledge available during his time and is widely regarded as one of the greatest bodybuilders ever. Consequently, we wanted to share a 3x per week full-body John Grimek workout that he himself shared with the world following his retirement from the sport.

A Little Background on John Grimek

Grimek was first inspired by his older brother who had a weight set at home of which he’d train with his friends. At 12 years old, John would hide and use the weight set since he was timid of anyone seeing him in fear that he’d embarrass himself.

He decided to relocate to York, Pennsylvania in 1935 where he met up with the man known as the “Father of World Weightlifting” Bob Hoffman, who owned the fitness product manufacturer York Barbell.

Grimek was involved in both bodybuilding and weightlifting, even participating in the 1936 Olympics (weightlifting) that was held in Berlin Germany of which he represented Team USA. He placed 9th at the Olympics. He even set the American and World Record for the Overhead Press at one point. And as mentioned previously, he won the Mr. America contest in 1940 and 1941, and then took first place at the Mr. Universe competition in 1948.

And what was quite impressive about his accomplishments was the fact that he remained undefeated throughout his career, even beating the likes of the great Steve Reeves, in addition to several other top competitors.

However, his accolades didn’t end there. The “Monarch of Muscledom” also spent time as the editor for the well-known Muscular Development publication, also founded by Hoffman. He also modeled during the Great Depression after having been noticed in New York where he was able to take home $80 per week which was a definite blessing during the time.

Grimek had a very illustrious career and even after retirement in 1949, he continued to train with passion as is the case with many legends, even having squatted 400lbs in his 60s.

Grimek was also a pioneer for many of the training principles adopted later on and he was inducted into the IFBB Hall of Fame in 1999. He passed away on November 20, 1998, in York Pennsylvania at the age of 88.

Grimek was also included in part of a mural located at 37 West Philadelphia Street in York, Pennsylvania, that was completed 20 years ago.

Related: The Best Male Bodybuilder of The Gold Area?

As previously mentioned, Grimek shared his bodybuilding routine following his competition days. And honestly, it doesn’t look much different than the routines that many follow today. He trained full-body three times per week as many other bodybuilders did during his time, which was also the case decades later during the Golden-Era of bodybuilding.

“I trained everything in every workout. I didn’t do what they call split workouts and train legs and arms one day, back and other stuff the next day. The only way I ever isolated a group of muscles was when I was finished with my routine for the day and I still thought I needed more for my back or chest or legs or whatever.”

Anyway, his routine was composed of mostly compound, multi-joint movements in addition to a few isolation exercises as well. He also followed a 3 sets x 10 reps protocol which you’ll also see a lot of exercisers doing currently. In fact, he was one of the originals to have adopted and stuck with this set/rep scheme.

There’s nothing complex at all about this training regime and it’s realistic which we think is pretty awesome and offers everyone the opportunity to follow it and make progress.

John Grimek was definitely onto something and from looking at his routine, he maximized his efforts in the gym.

“Train consistently 2-3 days per week and add weight to the bar whenever possible and get lots of rest, eat good food and drink plenty of water” – John Grimek

Check out his three-day full-body routine below…

Give It A Try!

If you’re looking for something new to try, the John Grimek workout is a viable option. And it’s actually a great routine for those newer to training as you’ll be able to maximize your efforts by focusing on compound movements.

So many people who start training focus a little too much (or entirely) on machines and isolation exercises that work one muscle group at a time. While this is fine to incorporate in your training, it’s not exactly the best use of your time and resources the majority of the time.

Multi-joint exercises such as squats and bench press activate several muscles simultaneously. This not only saves you time, but it’s a more functional way to train your muscles. Stabilization and application to real-life situations is one component that should never be neglected.

Not to mention, you can really load these movements and take advantage of the strength-building component due to a heavier overall load placed on the muscles. And while chest flys are great for development, it won’t offer you the same overall benefits as a heavy press.

How to effectively structure this type of workout routine

If you’re training full-body 3x per week, you need to be smart about how you do it as you would with any other resistance training routine.

John Grimek was incredibly impressive for his time when bodybuilders didn’t have access to the technology that we have today in all regards. If you’re interested in his stats then we’ve provided this information below…

So, what do you think? This John Grimek workout seems like it could be pretty effective if you tailor it to your current level of fitness. It honestly doesn’t look much different than the regimes we’re used to today which is simply incredible. Many old-school bodybuilders sure did pave the way for many of the techniques and methods of modern training principles.