Within two years, the Arnold Classic organization has more than doubled their prize money for first place in Men's Open bodybuilding.

Bodybuilding legend Arnold Schwarzenegger is upping the ante seven weeks before the 2023 Arnold Classic takes place from March 2-4, in Columbus, Ohio. The Arnold Classic organization released a statement on January 12, 2023, and announced the Men’s Open prize money has increased from $200,000 to $300,000 for first place.

Since 1989, the annual Arnold Sports Festival has been an integral part of the bodybuilding calendar. The event serves as the second-most prestigious competition in the world, behind only the Mr. Olympia. In addition to bodybuilding, the festival features an array of sporting disciplines, like strongman, strongwoman, powerlifting, and arm-wrestling.

While many fans are excited about the upcoming show, some, like Lee Priest, took issue with the promoters choosing not to showcase the Women’s Physique, Women’s Bodybuilding, Figure, and 212 Bodybuilding divisions at the 2023 Arnold Classic. According to Arnold executive Brian Powers, the decision was made due to a lack of competitors wanting to compete at the event.

The latest increase in prize money for Men’s Open bodybuilding is now $100,000 less than what Mr. Olympia offered their Men’s Open winner ($400,000 awarded to Hadi Choopan at 2022 Mr. Olympia). Meanwhile, Derek Lunsford, who accepted a special invite to compete in the Open class, ended up walking away with $130,000 for second place. With the new cash incentive, it appears the roster in Ohio is likely to grow.

In a post made to the Arnold Sports Instagram page, Arnold Schwarzenegger announced a record $300,000 will be awarded to the Men’s Open first-place finisher.

“From the first time we hosted a bodybuilding championship in Columbus in 1976, my goal has been increasing the prize money to reward these fantastic athletes.

They are making year-round commitments to improving their physiques and attaining their goals, and as a former competitor who worked bricklaying jobs during the offseason and now as a promoter, I want to match that level of commitment to the sport of bodybuilding,” Schwarzenegger said. “I am excited to announce that the winner of this year’s Arnold Classic will win a record of $300,000.”

“The $100,000 increase comes one year after the Arnold Classic top prize was increased from $130,000 to $200,000 as part of an investment that also saw the first-place check awarded to the Arnold Classic Physique champion increase to $60,000, the largest of any bodybuilding show.

The prize money for the Arnold Strongwoman Classic was also raised to $50,000, bringing the total cash prizes for pro bodybuilding and pro strongman to more than $1 million.”

Below you can find their full statement: 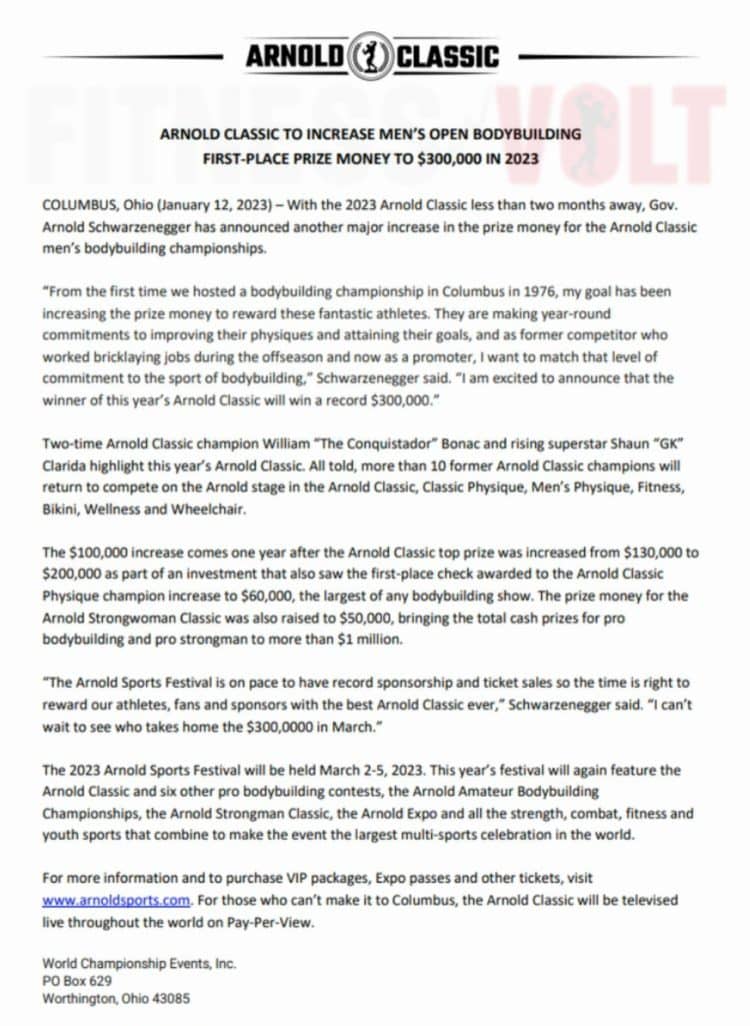 As of this writing, there are less than 10 bodybuilders on the competitors list expected to compete in seven weeks. Samson Dauda, who turned in a stellar Olympia debut in sixth place, will take part in his second Arnold Classic competition after finishing fourth place last year. Reigning 212 Olympia Shaun Clarida said he’s ready for a battle with Samson and is prepared to out-pose the mass monster.

Former 2021 AC champ Nick Walker would be a frontrunner if he decided to compete in Ohio, but publicly shot down the idea. He improved at 2022 Olympia with a third-place performance. Recently, veteran Samir Bannout suggested Derek Lunsford should make a splash at the 2023 Arnold. After finishing runner-up to Choopan at 2022 Olympia, Lunsford would enter the contest having defeated most of the lineup at least once.

The added prize money could motivate a few more contestants to throw their name in the mix. Despite losing over $4 million hosting shows during Covid-19, Schwarzenegger is determined to make the 2023 Arnold Classic bigger than ever.