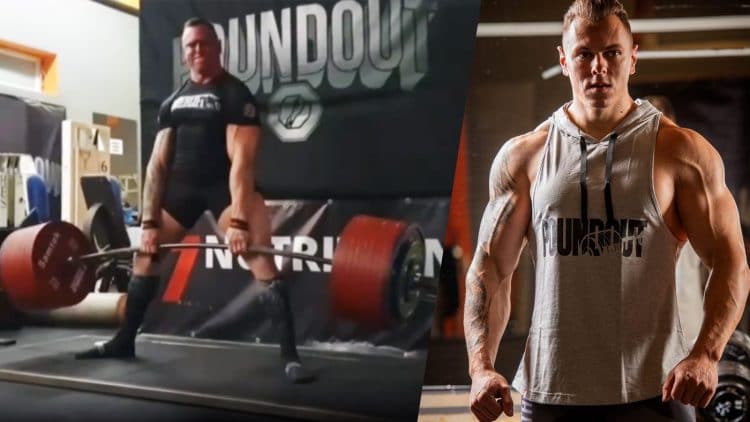 The powerlifting fans have had a lot to see in the past few days, and Krzysztof Wierzbicki’s deadlift is like a cherry on top. Krzysztof is known for his pulling abilities, which earned him the nickname “Mr. Deadlift”. He justified the nickname, having posted a MASSIVE 484.5kg (1068lbs) deadlift from training on his Instagram story.

In the video, Polish deadlifting sensation Krzysztof is seen pulling 484.5 kg (1068 lbs) off the floor with ease, but struggling a bit in the lockout phase of the lift. He is deadlifting with a sumo stance, which is controversial at times, but is completely allowed in the sport of powerlifting. Krzysztof also seems to have only used lifting straps to aid him in the lift.

Krzysztof has not revealed his bodyweight at the time of the lift, but he competes in the 110 kg category. In addition, his Instagram description is “ROAD TO 500 KG DEADLIFT”, making his intentions very clear.

Krzysztof is a Polish powerlifter with a very long career. He has been competing for almost 15 years, as his first competition was back in 2007. At 31-years-old, Krzysztof has competed in 30+ competitions, and made some outstanding success in the sport.

He holds Two All-Time World Record Deadlifts, in two different categories, which cements him as one of the strongest pound-for-pound deadlifters in the world. The records he holds are:

Krzysztof is now aiming to lift 500 kg (1102.3 lbs), but only two athletes lifted half a ton before, those are Hafthor Björnsson and Eddie Hall, and they both lift conventional. The first person to lift half a ton was Eddie Hall. He set the old deadlift world record of 500 kg (1102.3 lbs) at the 2016 Giants Live Deadlift World Championships. While attempting to set this record, Eddie seriously deteriorated his health.

Hafthor Björnsson then broke Hall’s record and set a new one with a deadlift of 501 kg (1104.5 lbs). He set the record at his home gym because of Covid-19 restrictions back in 2020, while World’s Ultimate Strongman regulated the lift.

It is surprising that alongside Krzysztof, the only other person who seems to be capable of lifting 500 kg (1102.3 lbs) is Jamal Browner. Jamal is using the same lifting technique as Krzysztof, and also competes in the 110 kg category. He attempted a 501 kg (1104.5 lbs) deadlift, but was unsuccessful.

We are waiting for Krzysztof Wierzbicki to attempt the 500 kg (1102.3 lbs) deadlift, and it could be a race between him and Jamal Browner to lift it first. We don’t know when he will compete again, but records are bound to be broken once he does.