No Result
View All Result
Bodybuilding
Evidence Based
Evidence Based Research
This article was written by one of our qualified writers, and fact-checked by our experts. The numbers in parentheses (e.g. 1, 2, 3, etc.) throughout the article, are reference links to peer-reviewed studies.
Our team of experts include a board-certified physician, nutritionists, dietitians, certified personal trainers, strength training experts, and exercise specialists.
Read Our Editorial Process

Learn the tricks of the trade from the master himself. 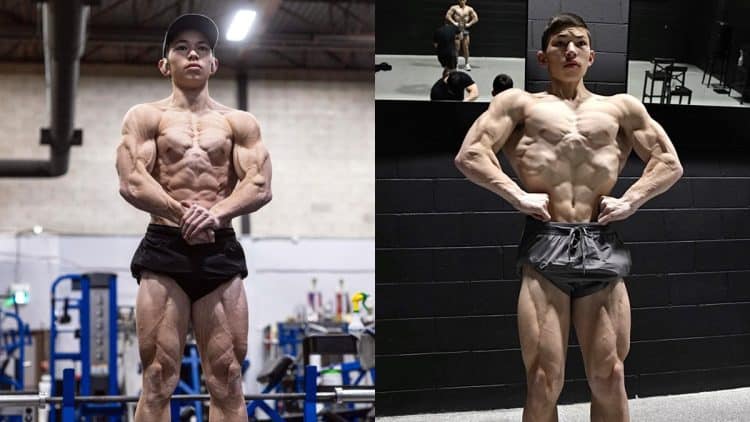 Tristyn Lee is one of the (if not the) most popular internet fitness celebrities. He is known for his trademark shredded-to-the-bone physique. Plus, unlike most pro bodybuilders who whittle for a show, Lee remained diced (sub-five percent body fat) for two years straight. TWO YEARS!

Maintaining a sub-five percent body fat for such a long period is no joke. To stay in this shape, you need to follow a strict diet, training, and recovery program. Additionally, you need to know what to do to achieve the goal without compromising your health. Notably, many health, fitness, and bodybuilding experts have criticized Lee for maintaining such a low body fat percentage at his age.

Lee started lifting weights in 2013 to improve his performance on the soccer field. However, his lifting practice got him international fame before his pro soccer career ever kicked off.

Lee started posting on Instagram in 2015. He did not post photos of his physique until early 2017. Long story short, at the time of this article’s publication, the young bodybuilder has over 2.1 million followers on Instagram and 1.7 million subscribers on YouTube.

Lee initially caught people’s attention on Instagram with his insane soccer skills. However, it wasn’t long before people started noticing his shredded physique. Lee’s popularity launched into the stratosphere when he revealed that he was just 15 years old.

In early 2022, Lee shared an in-depth video about his bodybuilding journey and his infatuation with a low body-fat percentage. We were sucked into the video from the moment go as the 20-year-old opens the video with, “Let’s talk about how getting shredded ruined my life.”

Before we get into the nitty-gritty about how Lee achieved and maintained a four percent body fat, let’s address the elephant in the room — genetics.

Besides being an incredibly talented, hardworking, and resilient individual, Lee undoubtedly has extraordinary genetics. His hamstrings are striated and have the perfect drop in the side chest pose, his quads have surreal separation and definition, and his calves could give a few former Mr. Olympia champions a run for their money. Okay, we probably went a little overboard on the last one, but you get our point.

Lee’s vascularity, V-taper — broad and round shoulders and small waist, and chiseled abs make him stand out in the oversaturated social media fitness influencer space. Plus, we should also consider that the 20-year-old is still in his formative years, and his physique will improve as he achieves muscle maturity.

Check Out: Top 5 Bodybuilders With The Best Genetics Ever

The 5-foot-3-inch bodybuilder didn’t always want to get paper-thin skin. “I was having 3,000 plus calories, and I was playing soccer as well as doing bodybuilding,” revealed the 20-year-old. Lee switched to consuming 1,800 calories a day in his quest to get as lean and shredded as possible.

In the article, we discuss:

When it All Started For Tristyn Lee

Per Lee, his obsession with dieting and getting to a single-digit body fat percentage began in 2018. Lee was consuming 3,000 calories a day while he was playing soccer and bodybuilding. However, when he left soccer for bodybuilding, his focus went from using food to burn as fuel on the field to trying to get as lean as possible for bodybuilding.

“I started obsessing over every little detail of my food and diet just to get to this sub-five percent body fat level.”

Furthermore, Lee revealed that his obsession with weighing food and eating the exact amount of food and calories to achieve and maintain his “look” made him delusional.

As Lee got leaner and entered the single-digit body fat percentage, his body’s biological hunger signals went for a toss.

Lee further revealed that he consumed carbonated drinks as they curbed his appetite by making him feel bloated.

Per Lee, he followed a competitive bodybuilder’s dieting phase for two years straight.

“I was shredding for a show, and I never brought my calories back up, and that was eventually to my detriment.”

The soccer player turned bodybuilder added that he consumed multiple (up to five) carbonated drinks every day to curb his hunger and cravings. This combined with hardcore training, made his adrenaline rip through the roof, which helped him ignore his hunger cues.

Giving Up His Social Life

To begin with, Lee clarified that he didn’t have an active social life before starting his insane calorie-deficit lifestyle.

“Going out to restaurants, seeing meals on the menu, and not knowing the macronutrients became an issue for me. I wouldn’t let myself go out and have a bite to eat with a friend or go out because I didn’t know the calories in the food.”

Furthermore, Lee was obsessed with burning calories so much that he continuously thought about his next meal and training session to ensure he did not put on body fat.

The Role of Social Media

Social media can lead to body dysmorphia; it was also the case for Lee. As Lee started posting photos and videos on social media, he started receiving accolades from his fans, which made Lee want to push even harder.

Step Counting For the Win(?)

“Another thing I was extremely obsessed about was the number of steps that I was hitting per day. It didn’t matter if I was on the treadmill, Stairmaster, or whatever cardio monster I was doing, I had to hit 15,000-20,000 steps a day.”

Lee added that he’d beat himself up if he didn’t meet his daily step goal. Per Lee, he drove his body into the ground every day and did not give it the time to grow, fearing that he might get fat.

For two years during his shredathon, the 20-year-old worked out seven days a week and often twice a day.

Here is a TL;DR version of how Lee achieved a sub-five percent body fat percentage:

Getting to a low body fat percentage sounds intimidating, which instinctively draws the challenge seekers to pursue the goal. However, there are several drawbacks to getting to a sub-6-7 percent body fat that you should know about, including, as revealed by Lee:

Per Lee, he was only sleeping 4-5 hours a night after dropping calories from 3,000 to 1,800 a day. Notably, this wasn’t out of choice, but he woke up in the middle of the night and couldn’t go back to sleep. To sum it up, Lee was literally losing sleep over achieving a low body fat percentage.

Lee noticed a gradual fall in strength after a prolonged plateau in the two-year window when his body fat was 4.4 percent. He went from pressing 120-pound dumbbells on the incline bench press to three months later only being able to press 110-pound dumbbells for the same reps. A study showed that it can take up to six months to rebuild the lost strength and muscle after you come out of a cutting phase. [1]

“I started to bite my nails and crave super sweet things. I didn’t want to be around other people and I was a little more irritable,” revealed Lee.

Fats are important for neurologic function, and low levels of essential fatty acids can result in irritability and severe mood swings.

While these three are the only issues mentioned by Lee in the video, it doesn’t end here. A low body fat percentage can:

Lastly, it’s a full-time job. If you want to attain a single-digit body fat percentage, you will have to put it in the center stage of your life. Your schedule, routine, and preferences will have to be modeled around your goal.

Here is a sample meal plan Lee follows to stay shredded throughout the year:

Although Lee followed a restrictive diet to achieve a four percent body fat (as seen in the section above), his strict training program was just as important in building a chiseled physique. Lee now trains six days a week and performs high-volume, high-intensity workouts to achieve a peeled look.

While Lee is shredded to the bone, his legs are his most prominent muscle group. Besides his intense training routine, years of soccer training certainly contribute to his lower body gains.

Tristyn Lee Back and Biceps Workout

Tristyn, with his brothers, Braedon and Tyler, own a supplement company called Chimera, which sells two supplements — a pump formula and a pre-workout. It is no wonder that Lee could push through a workout and lift the weight he did while staying below the five percent body fat mark. For your reference, the Chimera pre-workout supp has 325mg of caffeine.

You can check out Tristyn Lee’s low body fat percentage experience video below, courtesy of his YouTube channel:

Now that Lee is no longer pursuing a sub-five percent body fat, he has switched to eating 2,700 calories a day, which is a more stable approach.

Tristyn Lee accepts that he was dealing with body dysmorphia while pursuing his sub-five percent body fat goal. His perceptions about his body were self-admittedly irrational and delusional.

While losing body fat and building muscle mass can improve your overall health and aesthetics, you shouldn’t go overboard in your pursuit. You should consult your physician before starting any new supplement, nutrition, or fitness routine.