The Hall of Famer encouraged others to use belt squats for hamstring, quad, and glutes development: 'I can adjust my form to stress either the quads or glutes more.' 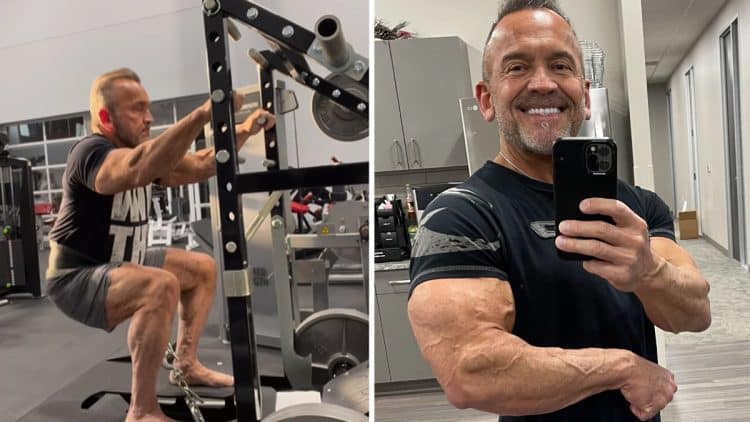 At 62 years old, Lee Labrada is the picture of longevity in the sport of bodybuilding. In a recent post made to Instagram, Labrada crushed belt squats for reps, which he credits as a great exercise for building the hamstrings, quads, and glutes.

Lee Labrada elevated his name in the sport with spectacular conditioning, balanced proportions, and arguably some of the best posing skills the league has ever seen. During his prime, Labrada was lauded for his consistency, especially when it came to competing on some of the sport’s most respected stages.

He is a 1985 Mr. Universe winner in addition to his performances on the Mr. Olympia stage. In fact, Lee managed to place in the top four at Mr. Olympia for seven years straight. In that time, Labrada pushed countless bodybuilders, some of which include, eight-time Olympia winner Lee Haney, Rich Gaspari, Robby Robinson, and veteran Samir Bannout.

The last time we saw Lee in action, he was showing off his jacked quads at 62. In the past, he mentioned that he believes bodybuilding to be the closest thing people have to a fountain of youth. Judging by his current physique, if anyone has found a secret to fending off age, it’s Lee Labrada. In his latest workout video, the bodybuilding veteran is sharing how he taxes his lower body with the belt squat machine.

In his latest post made on Instagram, Labrada taxes his lower body and keeps weight off his spine using belt machine squats.

“Belt squats! Love this exercise because it keeps loading off of my spine, and because of the Stability afforded by the hand holds, I can adjust my form to stress either the quads or glutes more. If your gym has one, try this!” Lee Labrada wrote.

Belt squats are believed to be one of the best exercises someone can do to maximize leg muscle recruitment while still reducing lower back strain. This exercise uses a standard squat movement, but instead of loading all of the weight atop the shoulders, the load is lifted with the hips and lower body due to the belt being worn around someone’s waist.

Belt squats have the advantage of loading the lower body without straining your back or needing to use your upper body, thus making them a very useful exercise for athletes who struggle with back or shoulder problems – even tight elbows can complicate the back squat. Belts don’t work like that.

This exercise removes a majority of the upper body from the equation, giving it a similar feel as a leg press or hack squat but with less strain on the spine and many of the same benefits as a barbell squat.

No matter what your training goals are, the belt squat is one of the most important accessory exercises you can use.

While Labrada hasn’t competed in a while, the Hall of Famer continues to shape and train his son, Men’s Open bodybuilder Hunter Labrada, who is in the middle of preparations for 2022 Mr. Olympia. Hunter took a break from training a few weeks ago to have Lee measure his biceps. He admitted he’s no Nick Walker, but Hunter’s biceps measured up to an impressive 22-and-a-half inches.

Lee Labrada is living proof that longevity in bodybuilding does exist. Despite a multitude of obligations, which includes helping Hunter with his Olympia prep, Lee understands the importance of maintaining his health as he gets older.