Lee Priest reveals the secret behind massive forearms, shares his favorite exercises to train them 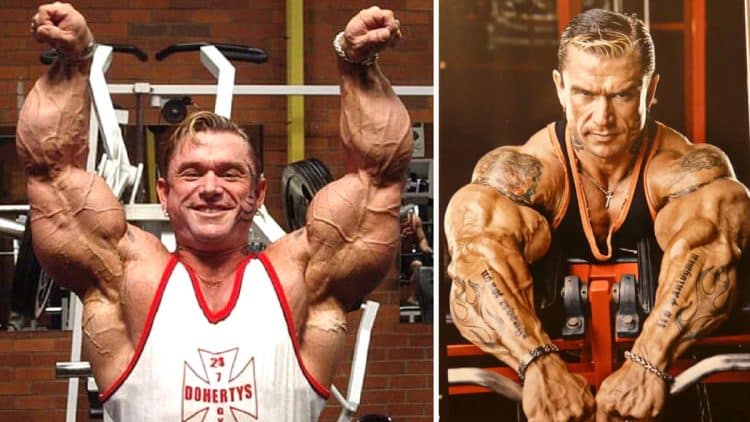 Veteran bodybuilder Lee Priest shared effective forearms-building exercises in a YouTube video. Priest is an Australian bodybuilder that created a lasting legacy in competitive bodybuilding through an illustrious career. He is known for incredible muscle mass, conditioning, and fighting against massive odds. In spite of being relatively smaller in size, Lee Priest remained competitive in the sport and started gaining attention at a very young age. In 4-time Mr. Olympia Jay Cutler’s words, ‘No one could ever blow your mind like Lee Priest looked when he was 21 years old’.

At the peak of his career, Priest gave Mr. Olympia winners like Ronnie Coleman and Dexter Jackson a run for their money. He has amassed a wealth of bodybuilding knowledge through decades of training and routinely shares informative content through various channels in retirement. The Aussie is also a prominent voice of the sport and gives his take on current affairs in bodybuilding. He also opened up about the PED use at the peak of his career and how it affected muscle mass. The 50-year-old is also a strong candidate for the Masters Olympia competition that is set to return in 2023 after eleven years of absence. However, Priest state that he will probably compete there if they made it ‘50 and over’. Recently, Lee Priest shared forearm-building exercises in a video posted on the IFBB AMA YouTube channel. So without further delay, let’s check out the exercises Lee Priest advises to do for forearms.

Lee Priest’s massive forearms are among the best ever in the history of bodybuilding. While they might appear to be a result of a specific forearm routine, it’s quite the opposite.

“In all seriousness, I have never trained them (my forearms). Yes, for videos and the old flex magazines and the MD magazines and the photoshoots and videos, I’ve done them but if you listen, you’ll always hear me say, ‘if I was going to train them this is what I would do,” Lee Priest said.

Priest’s forearms and hand muscles are a genetic gift that most people in his family were bestowed with. Sure, having those massive forearms is an added benefit for a competitive bodybuilder like Lee. However, there are upsides and downsides to everything.

“If I was doing back or any type of exercise my forearms and my actual hand muscles always gave out before my back did. I could be rowing, doing back and my forearms would go boom, I could be doing shoulder presses and boom! Pretty much anything I did my forearms got a great workout,” Lee Priest explained.

Although Lee Priest does not train forearms himself, he shared some effective exercises for the muscle that he would prefer to do.

This is the first exercise that Lee Priest recommended for building forearm muscles. Anyway, grab a hold of a loose straight bar attachment. Tie one end of a rope to the bar’s hook. Tie the other end of the rope to a weight plate. Hold the bar with your arms straight in front of you at shoulder level. Slowly reel in the hanging weight plate and once you have it fully reeled in, reel it out again. Repeat this process to get a massive pump in the forearms.

“That’s a really good one. Like I said, when I geared up for a photoshoot and all that, I got a good pump,” Lee Priest said.

Priest then shared the next exercise for building forearms.

While there are forearm training machines in many gyms, there is no guarantee that your gym might have it. Lee Priest provided a simple yet effective solution for this problem. Priest suggested finding a straight bar attachment and attaching a weight at its end. OR get a heavy hammer and hold it in one hand. Keep your hands down in the natural position and curl your wrist using forearm strength. After getting a good pump, switch the hand and repeat.

“Hammer curl done correctly is straight up and down like a hammer motion. Not this (cross body).” Lee Priest claimed.

The retired bodybuilder suggested doing the standard dumbbell hammer curls to work the forearms along with the brachialis muscles. He added that the purpose of these forearm exercises is to totally fatigue the muscles and not bother about the rep range or the number of sets.

“So I just keep going and going till I can’t do it no more. Even if it’s just getting a little bit down the bottom,” Priest added.

Most upper body movements in weight training require you to grip an object for targeting a specific muscle. Therefore, forearms get activated even if you don’t do specific exercises that target them. However, some arms exercises can be modified to emphasize forearms. Cable curls are one such movement. To make it more forearm-focused, the retired bodybuilder suggested using the rope attachment. He added that this exercise primarily focuses on the upper forearm and the lower biceps.

“Again, control the movement and just really squeeze down. If you wanna do more biceps, you’ve got to (bring the hands away from each other) but just for forearms mainly (keep both arms together). The biceps are going to come into play no matter what!” Lee Priest added.

This is the next good forearm exercise in Lee Priest’s books. You can do this exercise with a straight bar. However, the 50-year-old bodybuilder gives preference to the EZ bar as it keeps the wrists at a slight angle.

If you have heavy enough weights on the cable machine, you can switch from reverse grip cable curls to this exercise right away. Just drop your hands down and curl the lifts towards you while holding the bar attachment.

The standard wrist curl does not need any introduction. However, not many people do it nowadays so it is worthwhile to explain the exercise. Sit on your knees while holding a barbell in both hands and keep your elbows on a bench. The wrists should be slightly off the edge of the bench. Now curl the wrists to feel the pump in your forearms.

Lee Priest next shared his favorite exercise for building forearms. While the Australian bodybuilder does not specifically train the forearms, he does like to do this exercise once in a while.

Start the superset with hammer curls. After finishing a set, switch over to doing the plate curls. To do this exercise, hold the plate in front of you – similar to the way you hold a steering wheel. Now keep curling your arms till you feel the burn in the muscles. Wait for a few seconds after the set till the burning sensation goes away and repeat the process.

Priest stated that the plate curls by itself might produce great results. However, it is a potent forearm builder when coupled with hammer curls.

Lee Priest is blessed with the genetics that gave him enviable forearms. But it does not matter if you are not as fortunate as him because the veteran bodybuilder has now laid the path in front of you. So hit the gym, try these exercises and see the results.

You can watch the full video here, courtesy of IFBB AMA YouTube channel:

Military Press vs. Overhead Press – Which One Is Best?